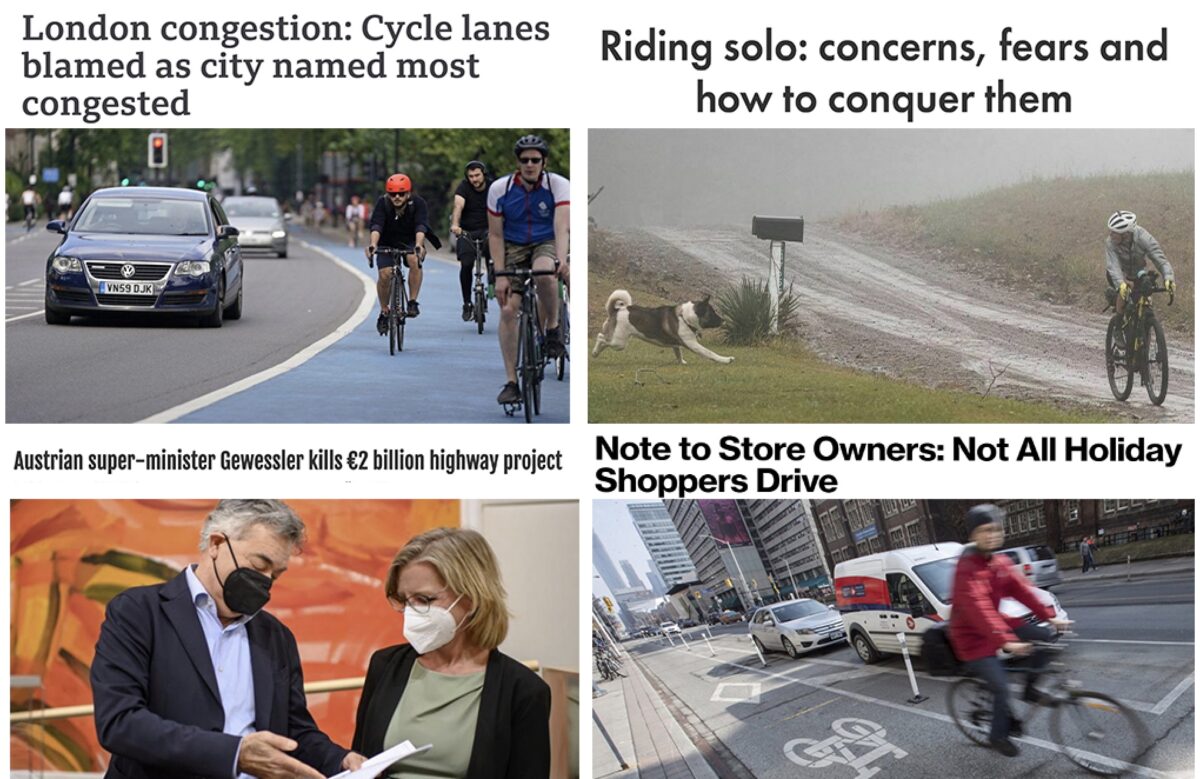 Welcome to the week. Here are the most notable items our writers and readers came across in the past seven days.

But wait… Here’s a word from our sponsor: Portland-based Nossa Familia Coffee makes a great gift. Now until Christmas Eve you can get 15% off all coffee and merch sitewide. Just use the code “LAST15” at checkout.

OK, here’s what you need to know…

Always thank your bus driver: Transit expert Jarrett Walker says the bus driver shortage that led to major service cuts at TriMet is a serious problem and that kindness — to drivers and TriMet — is one way we can help make it better.

ODOT lying about climate plans?: City Observatory founder and economist Joe Cortright highlights ODOT’s double-speak when it comes to promises made to the public about greenhouse gas emission reductions versus what they tell bankers and potential investors.

Cascadia’s climate change problem: Grist has a solid overview that explains why, despite strong intentions, the Pacific Northwest hasn’t moved the needle on greenhouse gas emissions (notably, the long article includes the word “transportation” only once).

The traffic myth: Any city that is re-allocating road space away from car users needs to prepare for the inevitable backlash that we are starting to see in London, where people claim that “bike lanes cause congestion.”

E-bike tax credit: Latest major coverage of the e-bike tax credit in the Build Back Better bill includes comments from one of its familiar champions: Portland Congressman Earl Blumenauer.

Public safety threat of the year: The same week that Time Magazine named Elon Musk “2021 Person of the Year” the NY Times has a story about how Tesla drivers can play video games while driving. But it’s really not that big of a deal says a counterpoint from Vice, given the general culture of distraction the entire industry is guilty of.

Ride solo, ride safe: Ride With GPS has a great roundup of tips for how to conquer your fears of riding by yourself.

Few cars, more customers?: Despite all the gains we’ve made weaning small business owners off their parking addiction (thanks to Covid-inspired plazas and patios), it’s likely that most people associate more car parking with more customers — but that narrative isn’t exactly accurate says David Zipper in his latest for Bloomberg.

No more freeways (literally): This Austrian super minister is a superhero because he killed a massive freeway expansion mega-project on the grounds that he didn’t want to live with regret and be part of a project that “poured concrete over our future.”

Video of the Week: Streetfilms has a wonderful new video about the new bike boulevard on 39th Avenue in Queens (that looks a lot like some of our neighborhood streets here in Portland):


Thanks to everyone who shared links this week!

RE Fewer cars/More customers: The quote in the article says it all: “You own a deli in Midtown — no one drives from outside Manhattan to get a sandwich in the middle of the day.”

It all depends on the type of business. “Neighborhood facing” businesses, such as small restaurants, bars, bakeries, etc. probably get the majority of their business from foot traffic. “Destination” businesses, such as those gift boutiques on Hawthorne, likely draw customers from further afield, and for them parking would be a greater issue, especially in winter, when many of those stores do most of their business.

The PSU study cited in the article focused on restaurants, bars, and convenience stores, which helps explain their findings. I doubt they generalize to different types of businesses.

In other words, what works on Division or Belmont may not work on Hawthorne or NW 21st/23rd. Context is everything.

Defund ODOT/WSDOT to stop the damage?

I generally find that people with entrenched views about specific subjects don’t want to be bothered with actual data, unless it confirms their position. Data that contradicts their position is usually ignored. Doesn’t matter whether we’re talking about predation of livestock, nuclear energy, eliminating freeway expansion or making streets more human friendly, if the data doesn’t support a person’s pre-existing belief – they’ll ignore it.

Applies to many/most issues at all points along political spectrums.

The “ride solo” article’s photo hits home. My biggest fear on my rural rides are aggressive dogs. There is no good solution. Sprint and risk triggering the dog’s chase instinct. Stop and risk giving the dog an easy meal. Spray with water or pepper and really aggravate them. I’ve stopped riding routes that I know have dog issues.

LONDON BIKE CONGESTION: Looking at past Inrix research for Honolulu (preCOVID), I found that their reporting was questionable…and any city or agency should be only use it with ‘a grain of salt’ and never by itself due to its ‘mono cropping’ like focus… with the insight that Inrix is using it to drive potential customers to their for-profit services.

I read the Vice article, and I’m not sure that what the author is saying is that it’s “really not that big of a deal.” I believe what the article is instead saying is that it is a big deal but so is every other safety violation in the rest of the industry, and that it doesn’t make sense to single out Tesla, and I don’t entirely disagree with that point of view.

I think the gov’t has to start somewhere. Maybe drivers being able to play video games and watch tv will be that? Nah, nevermind. It would be amazing to see infotainment systems dialed WAAAAAaaaaayyyyy back, but…

I think touchscreen interfaces are inherently incompatible with driving, so I think banning those would be a good first step. Everything should be tactile or have a voice command interface. Anything that allows the driver to make MINOR adjustments to their comfort in the car without them taking their eyes off the road and being distracted should be OK, I think…

The actual source material of the Grist piece Jonathan linked has a better discussion of transportation:

Transportation has long been Cascadia’s top climate challenge, accounting for nearly two-fifths of emissions by the time its economies rebounded from the global economic meltdown in 2012. Six years later vehicle emissions had ballooned by over 10% in Washington and Oregon and more than 29% in BC (in contrast California’s grew only 5% during that period.)

Despite a huge increase in cycling mode share in Vancouver BC (from ~3% to -10%), BC driving emissions went up 29%. This trend illustrates how the belief that increased cycling mode share will have a large impact on transportation decarbonization is a form of magical thinking.

I also thought it was darkly comical that this investigative consortium had the gall to praise a 5% increases in transportation emissions in California. This kind of toxic positivity/hopefulness justifies continuing inaction (e.g. praising increased emissions).

Another way to be nice to transit operators is to do some of our best riding around buses. It’s not hard to anticipate when a bus is about to pull out, and if one rider stops almost everyone else will too. Drivers notice stuff like that. I feel like bus drivers work with me more than they used to. Maybe it’s training, or maybe they know my bike?

An operator’s job would be a lot easier if traffic engineering
always favored transit vehicles. Rose lanes are great, we need more of them. The added productivity would certainly help fill in the schedule and also reduce operator stress.

Pedestrian crossings should never have to wait a full light cycle and with that exception a bus should never encounter a stop signal. Until we get that done the PBOT priority triangle is just chaff going downwind.

ODOT lying…(Joe Cortwright)
They put it in writing, a clear policy variation from Gov. Kate Brown’s direction. It’s time make some changes in the transportation commission and while adding a kid is an excellent thought that is not what I’m talking about. It’s time for a fresh deck.

Kindness to Trimet drivers? I would have agreed until I had a bad experience recently loading my bike on the 44 line. The driver wanted me to remove some small bags that were very securely fastened, which no driver has ever requested be removed in a decade of taking buses. I ended up in a heated argument with the driver and pulled my bike off the rack in frustration, instead of taking the bus – leaving the bike rack in the down position, and giving the driver the middle finger as I rode off. I reported the driver; the Trimet official who took my complaint was very understanding. Still, the incident left a bad taste in my mouth and I haven’t ridden the bus since.

Maybe the driver was over-zealous or had a beef with bike riders, who knows? But, I come down on their side here. The driver is responsible for bad outcomes of extra equipment on a bike, or if the bike comes off the rack and causes an incident. In this situation they’re the Captain and the answer is “OK!”

I really find Grist’s lack of a sustainable lens when it comes to our transportation system so frustrating. There have been a few decent articles but it’s moreso in the current articles there’s a lot of hope pinned on electric vehicles and zero critical analysis on if going all in on electric vehicles is truly sustainable. Sadly they’re not unique in this grave oversight.

I agree that electric vehicles aren’t exactly sustainable, but they do provide the only viable route I can see to get us past our current transportation emission crisis. They’re more a bridge than ultimate solution.

Thanks for continuing to mention Clara Honsinger’s achievements. It is awesome that the top US cross racer calls Oregon home and I believe still rides in the area on occasion. Here’s hoping she can win worlds soon. It would be great if bikeportland could interview her to learn if and how cycling in Oregon helped her rise through the ranks typically dominated by Europeans.