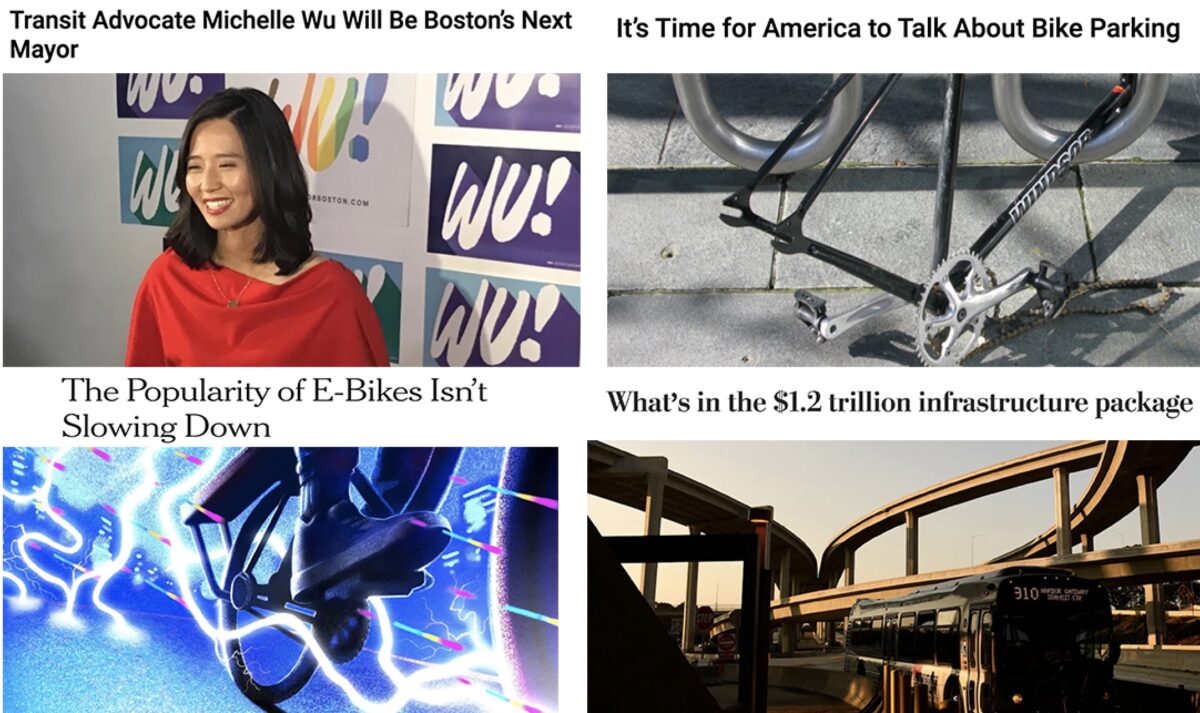 Lots of news this past week, so let’s get right to it…

Infra bill passes: A tidal wave of federal funding for transportation will start hitting state and local governments thanks to the $1.2 trillion infrastructure bill that finally passed the House and will be signed by President Biden.

MUTCD reform: With new infrastructure money in play, the engineering manual used by the FHWA (the Manual on Uniform Traffic Control Devices, or MUTCD) to set street design standards will be even more influential. Check out this Urbanist article about how an effort to update it with key bike/ped safety innovations seems to have been pushed aside.

Don’t overlook bike parking: A secure and functional place to park bikes is often overlooked, even in the bike-friendliest cities. That needs to change says Streetsblog in this excellent breakdown of the problem.

Biker beacons in Biden Bill? Forbes says a provision in the new infrastructure bill could require bike riders to wear microchips that communicate with AV-enabled cars. (FWIW it’s definitely not a sure thing and I personally don’t think it would ever happen.)

Biking and enforcement: A massive investigation by the L.A. Times found that police used minor bicycle laws to stop-and-search riders and did so in a way that reveals disproportionate focus on people of color who live in lower-income areas.

E-bikes booming: Despite a lack of infrastructure to use them on and a lack of government subsidies to purchase them with, e-bikes are more popular than e-cars and the boom is likely to continue.

The promise of Mayor Wu: Boston has elected a mayor that unabashedly supports the Green New Deal, has impeccable transportation bona fides, and is an outspoken advocate (and user!) of public transit and bicycling.

Try it, you’ll like it: Smart cities will do whatever it takes to encourage e-bike adoption one way to do it is an e-bike lending library.

Bike trains on NPR: Here’s the story behind a viral Twitter video of hundreds of kids in Barcelona biking to school together in a “bicibus”.

Deadly hazard: Police say a man riding a bicycle on Highway 101 in Lincoln City likely crashed into a road sign prior to being found dead on the roadway.

Noisy cars: The state of New York is the latest to pass a fine for loud auto exhausts in a bid to tamp down on noisy cars and street racers.

Traffic cameras, good: “The more automated the process, the less discriminatory it is,” says urban planning commentator Matthew Yglesias in a new essay that advocates for more traffic cameras.

Research beat: A new paper sheds light on how the “kindermoord” and other social protests in Amsterdam in the 1970s led directly to government influence that beat back motordom and led to a cycling renaissance that’s the envy of the world.

Regarding the article on the bicyclist who died on Hwy 101, where in the link does it state that he was hit and killed by a car driver after hitting the road sign?

It doesn’t. I misremembered the story and made an error. I’ve edited that item. Thanks.

RE: bike parking, so true. I have often decided to drive into downtown rather than bike because my car is less likely to be stolen while parked. I bike commuted downtown for years because I was parking my bike in secured parking at my office, but without that option, I would have chosen another mode. Of course, post-pandemic, my bike just gets parked in my garage at home.

Required or not, I’ve been saying for a few years that we’re going from “the cyclist was not wearing a helmet” to “the cyclist did not have a vehicle-to-vehicle beacon.”

I am not too worried. A few years ago I would not have considered driving for even one day with expired tags. Now I see loads of cars and trucks driving around town without even a license plate ( or the little paper stickers in the window. I don’t see the type of organization coming back to society that would require bike chips ( or the infrastructure for AV’s).

As Tesla has demonstrated, the Auto industry is going to continue to foist AV technology on the public whether the infrastructure exists to support it or not. The legal framework to hold car operators accountable for vehicular carnage is totally lacking. Unless government agencies put the clamps on things, we are going to be over run by semi automated death machines before too long.

Within a few years they’ll be the hot thing to have, just as we currently let and even encourage private companies to track our every move on our cell phones or Strava, knowing full well all that data can be bought and sold, and is regularly stolen. We’ll all have those tracking devices, made by Trek, Specialized, Quality/Surly/Salsa, Next, Huffy, Pon/Dorel, Shimano, etc.

Tesla’s laughable “Full Self Driving” is an outrage (an example of corp-fasc-sm) but given how exceedingly violent and deadly “Primate Drivers” are, I suspect Tesla’s algorithm may already be safer.

Bikeninja…true (I agree with the poor state of MV safety equipment and licence tab enforcement these days vs. the 1970s etc.) at one level BUT the other issue to consider is how would a future ‘requirement’ (legal or assumed) for ped / bike beacons and the lack of possession of such be interpreted / used by a civil court jury to find fault / and the judge to reallocate more “fault’ onto the VRU. Juries and judges already (and police reporting of crashes) do similar when it comes to adult cyclists not using helmets (even when not required by law), wearing dark riding clothes etc.

Infra Bill Passes: Before we get too excited, keep in mind it’s for a 5-year period of time, not one year. It’s also useful to know how much of the covid money was a total waste, since much of the funding comes from the unused money.

From the same article:
The infrastructure package contains $550 billion in entirely new investments, including money for electric-car charging stations and zero-emission school buses. The spending is mostly paid for — without raising taxes. The bulk of the funding comes from repurposing unspent coronavirus relief money and tightening enforcement on reporting gains from cryptocurrency investments. The bill would add about $256 billion to the deficit, according to the Congressional Budget Office.

lol don’t post matt “different safety standards in different countries are ok” yglesias, the dude has a humiliation fetish and gets off on being wrong about everything in public forums

Tickets for noisy cars? Sure, they piss everyone off. But, noise enforcement requiring a decibel meter is tricky.

I’d love to see the authorities go after the obviously-visible and easily-cited violations of excessive window tint and absurd bumper heights. I can barely make eye contact with most drivers anymore, because I can’t see them. Brodozer bumpers are at the right height to take out shuttle buses full of people. And they’ve usually got loud exhausts too. Three strikes and you’re out!