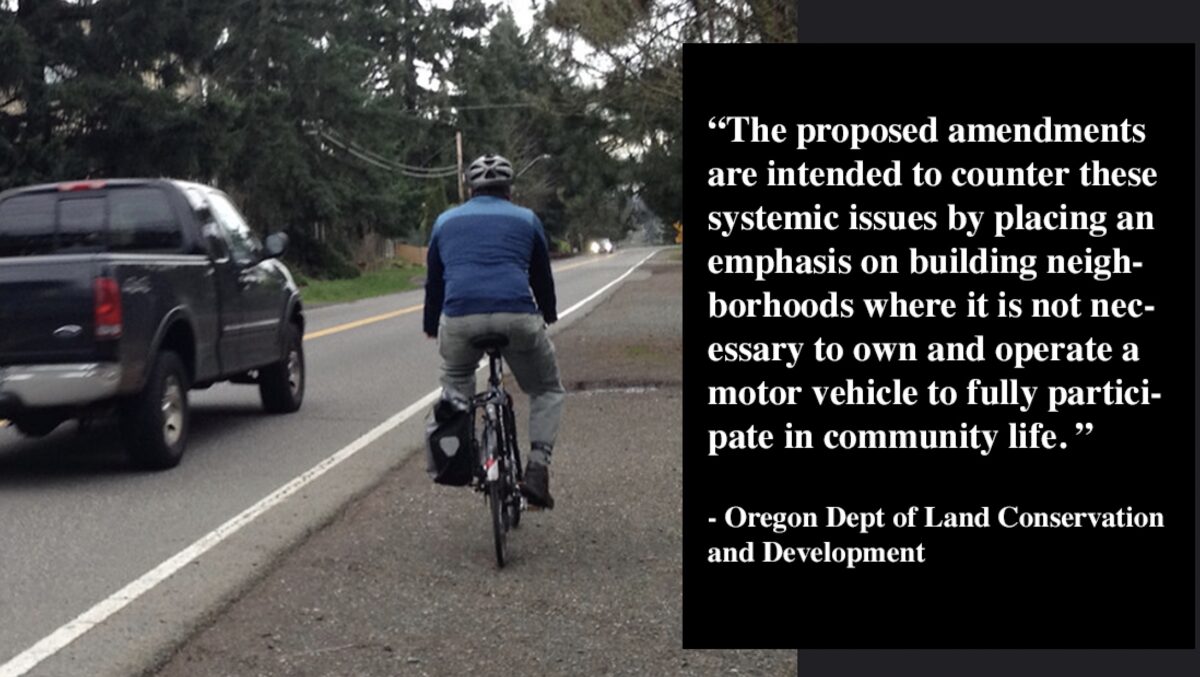 The reverberations of the Oregon Governor Kate Brown’s executive order on climate change, issued back in March 2020, continue to be felt.

For just over one year now, staff at the Oregon Department of Land Conservation and Development (DLCD) and an advisory committee have been working to fulfill Brown’s edict with a vast overhaul of rules that will update the state’s planning requirements. With a belief that, “Urgent and aggressive action is needed,” the Climate-Friendly and Equitable Communities Rulemaking (CFEC) process would set expectations and guide outcomes of those plans so they meet Oregon’s greenhouse gas emission reduction goals. The rulemaking would apply to Oregon’s eight largest urban areas with populations over 50,000 people (Albany, Bend, Corvallis, Eugene/Springfield, Grants Pass, Medford/Ashland, Portland Metro, Salem/Keizer).

“The end goal is to transform Oregon’s communities to be safe, equitable, sociable, and pleasant places where driving is not required, and the amount of driving is reduced,” wrote the DLCD project leads in a summary to the amendments sent to the rulemaking advisory committee on October 22nd.

What’s notable about this effort is the scope and detail of the proposed changes and how they directly address things like bicycle planning, housing development, parking reform, and more. The draft transportation planning rule amendment (full version in this PDF) is about 100 pages long and full of specifics. DLCD staff and planners leading this effort (one of whom, Evan Manvel, just happens to be a former executive director of the state’s largest bicycle advocacy nonprofit) make a direct connection between the need to reduce emissions and the need to do a bunch of the stuff activists have been pushing for for years.

DLCD has clearly realized that current local land use and transportation plans are much too weak and have no chance of meeting Oregon’s emission reduction targets without dramatic changes. Their new rules aim to hasten those changes and are based on overarching principles of building new developments in proximity to existing destinations and services, shifting investment toward walking, biking and transit, disinvesting from “motor vehicle mobility” and meeting needs of historically underserved people.

As an example of how robust these changes would be, the existing transportation planning rules for Oregon are relatively curt when it comes to bicycle planning. They basically just require local governments to include bicycling in their Transportation System Plans. But the amendments include an entire bicycle planning section that’s significantly expanded and strengthened, and separated out into its own set of rules.

The new bicycle planning rules (in chapter six) require governments to plan for a complete “bicycle system”. They also must provide an inventory of the projects required to build out that system, a list of gaps and deficiencies, data on crashes and risk assessment, and more. There’s also a requirement to increase physical separation of bikeways as the speed and volume of vehicles increases. The new rules even go so far as calling for, “a connected network of bicycle facilities that provides a safe and comfortable experience for people of all ages and abilities.”

In a meeting of the rulemaking advisory committee last month, CFEC process lead staff Bill Holmstrom said, “The one little paint stripe along an arterial in most places isn’t going to cut it anymore.”

The old rules had only one mention of “bicycle parking” and said cities only had to require it at multi-family dwellings, commercial buildings, and transit centers. The new rules have an entire section on bike parking which goes into detail about the amount and type required. It calls for covered and secure parking, a minimum of one bike space for each residential unit and even calls for a minimum level of electric bike/micromobility device charging outlets.

And these are just the bicycle provisions! The new rules on car parking reform are equally intriguing and potentially transformative. They call for parking maximums, new ground-floor uses for parking garages, and more.

It’s a breath of fresh air to see State of Oregon employees so clearly and confidently make these important connections and have the words and policies to back up the rhetoric.

If all goes according to plan the Land Conservation and Development Commission (LCDC, not to be confused with the DLCD) will adopt the new rules later this winter, with subsequent adoption by regional agencies in the eight metro areas by spring of 2022.

Learn more about this effort and read the full list of proposed amendments at the CFEC rulemaking process website.

Wow! Directly calling out the painted bike gutters as insufficient, requiring physical separation from cars, and building to accommodate people of all ages and abilities rather than just risk tolerant men. This is seriously so good to hear.

DLCD rules are great but they have no teeth.

Gary B
Reply to  FDUP

Thanks for saying that. Reading this article left me wondering what these rules actually do. I have no idea if or how this DLCD rule will flow down to local government (from your comment it sounds advisory). The mechanics and implementation of these rules are highly pertinent to the article.

That’s an overly simplistic way to look at this FDUP. These rules have a different kind of influence. Yes, the state will not send a trooper to your office if you fail to implement the right kind of bike lane, but that’s really not the point. These rules are made powerful when city planners use them as the backbone of their decisions. As in, once they are official and adopted by the major cities/regional MPOs, individual planners can then use them to update their city plans, which do often dictate how stuff gets built and what policies get implemented. In progressive areas with smart planners, these rules will be embraced and used as cover for making bolder moves.

According to the DLCD we should be doing all kinds of things differently; for example, the Willamette River loop, including the North Portland greenway, should have been completed years and years ago.

By law, DLCD is a party to all comprehensive plan amendments and zone changes occurring in Oregon. The statewide planning system imparts on parties the right to appeal local land use decisions to the Land Use Board of Appeals, the Oregon Court of Appeals and the Oregon Supreme Court (in that order).

Following adoption of the Climate Friendly and Equitable Communities rules by LCDC, all cities in Metropolitan Planning Areas around the state would face potential appeals of Comprehensive Plan amendments, particularly Transportation System Plan amendments, if the resulting urban form is inconsistent with the rules. The threat of appeal by DLCD is a real motivator for local governments to make relevant plans consistent with the statewide planning system and provides ample teeth when pursued.

Jonathan – thanks for this article. As you say, this could really transform how land use and transportation planning is performed to achieve better outcomes. For anyone who bothered to click on the link to look at the draft review document, one can see it’s packed with details that only policy wonks and attorneys would have the patience to read, let alone understand. As the state, local governments, and citizens work to refine this over the next few months, the devil will certainly be in the details. Seasoned planners are still trying to get their heads around the details and complexity of this initiative.

The ultimate success of the executive order will be the commitment of local government and its citizens to make it happen. A big piece in my opinion will be achieving a higher level of intergovernmental cooperation between the planning jurisdictions (cities/counties), the road jurisdiction entity (often ODOT or counties for major streets), and transit agencies. Traffic engineers will be asked to evaluate performance of major streets in a more holistic way than simply focusing on auto throughput. Getting a change in existing attitudes and practices will be the big hurdle.

Regarding timing, the schedule you mention has been relaxed a bit. According to DLCD staff, input will be received into early next year, the first LCDC hearing will be March 31/April 1, 2022, and the adoption hearing is scheduled for May 19, 2022. Given the scope, complexity, and politics, I suppose this schedule could be amended, and we should stay tuned. Also continue to check the state’s website about opportunities to comment and participate in this process.