Our space, our place: Dispatch from a BIPOC ‘Frogger’ ride 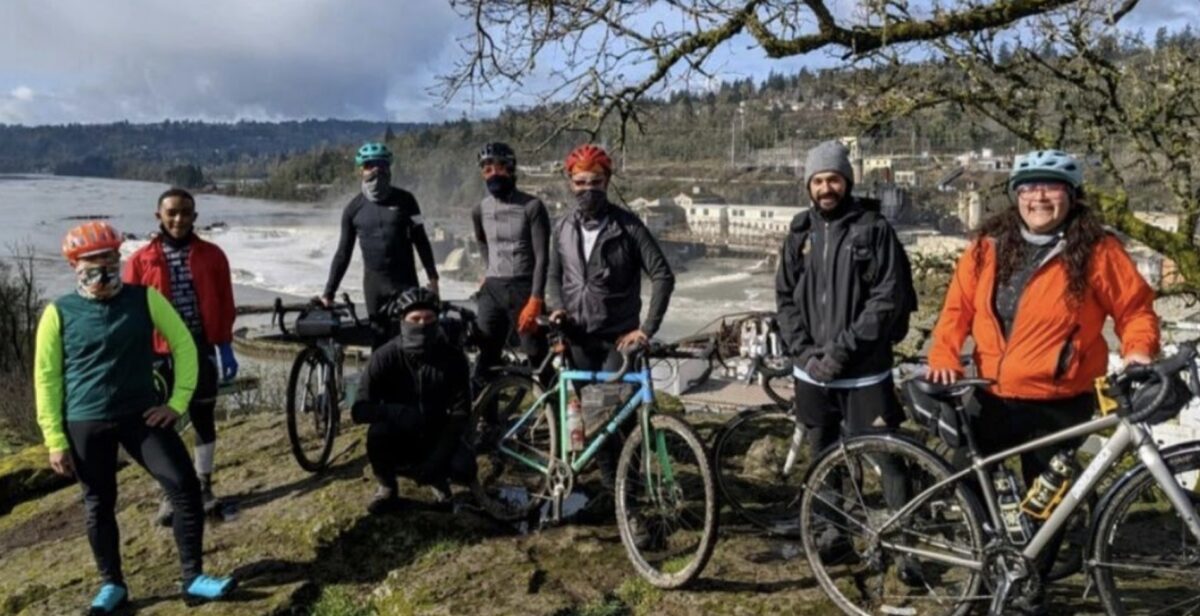 This story is by northeast Portland resident Mateen Richey, a new contributor who you might recall from our profile of him back in January.

“At this ride, we were all people of color.”

This is a dispatch in the month of Black History (the shortest month of the year). I was recently invited to a “Frogger” ride for BIPOC (black indigenous people of color). A “Frogger” ride is a ride that hops from road to wet dirt, singletrack to gravel roads, and back again.

We rode on levees high above the sloughs. Like cyclocross, we jumped off, shouldered our bikes, and ran up the side of the levee. After a while, we stopped and talked in the secluded natural areas. The ride was one to remember.

People fell off their bikes on muddy technical paths, and then got up and rode on, laughing.

After a 9:00 am meet-up at Foxy Coffee (5610 N Interstate Ave) we rolled out, headed for Heron Lakes. Up through St. Johns and around Pier Park.

Once there, we played like children! Turning left and right around the tree-lined paths, the fast people went ahead up the hilly paths through an area called “Pirate Town,” and then slowed back to be a part of the group. Folks were having a good time.

But the fact we all loved cycling, and as strangers came to really like each other on this day, was not why we all gathered together.

There was a more driving reason for us gathering together. Something compelling: At this ride, we were all people of color. We were not exclusionary, we were just informed. We knew this was a ride by, and for, BIPOC.

When I pulled up to this ride, I was surprised. Usually when you roll up on a ride in Portland, there aren’t any other faces of color. Well on this ride, there were seven! That made it special. Suddenly I thought to myself: “Finally, a place for us to be ourselves alongside others that understand!”

Everyone on this ride was eager to hear the others talk. No one knew each other, but you would think we were all great friends. In minutes, everyone was comfortable.

There was incredible love and care for each other throughout this ride. If one person’s tube popped, the whole group would rush over to offer their only tube and pump. It was a no-drop social ride for sure, but it was more than that.

Kay Ray, a well known cyclist, spoke of an experience he had riding his bike on a country road in Banks (a rural town east of Portland). A truck driver saw him and slowed down to confront the conspicuously African-American rider. The truck driver pointed a handgun at Kay Ray, and laughed. The driver flipped Kay Ray off, and sped away. As if to imply: “The color of your skin makes me feel this way about you.”

Will: “He said that?

Kay Ray: “No, but his actions speak louder than words. How do we stop these racist interactions? These are things you don’t want to talk about, but we have to.”

Will: “You can tell me to comfort someone, but I won’t. The presence of racism is like a charged argument constantly waiting to happen. The color of my skin, my accent, and the music I listen to, will inevitably escalate the situation.” 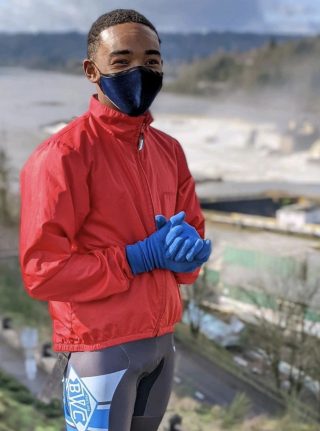 While all this was being said, a man next to me named Silas, asked, “Did you race cross? There’s not too many people out there who look like us. It would be very hard to miss you.”

I thought to myself, I only know three BIPOC who race cyclocross, and it is really discouraging. Then I remembered something Justin Williams said on a podcast. “When I was coming up, I didn’t see anyone like me who was racing, and it made me think I couldn’t do it.”

My friend who is a bike store employee and very bike-smart person, told a story of his co-worker belittling him, telling him to get this and that. It’s pervasive. It’s the stench of something evil left on an old industry.

Many POC in cycling today might look up to Ceylin del Carmen Alvarado, Justin Williams or Rahsaan Bahati as their idols, or they might be inspired by other cycling leaders of color. They have done so much cycling-wise, but their influence goes farther than cycling. They give us permission to do the impossible.

For some POC, a frogger ride might be a path to feeling more comfortable in the peloton and Oregon cycling in general. Cycling off-road is a good place. For all the cycling souls seeking space. “Our place.” I think maybe we can have it. Maybe we can create our space, and take our place.

Mateen is an 18 year-old bicycle racer born and raised in northeast Portland.

Thank you for this article. It reminded me of an ultimatum I delivered to my husband 25 years ago, when we were living in NYC. “We need to do something that is fun! I don’t mean cultural stuff–and I don’t care what it is–but it has to be something that is just fun.” That’s when he bought a couple of used bicycles from a colleague who was upgrading. Turns out there are nice trails in Flushing.

Thanks for sharing this Mateen! Your story totally brightened my day.

So great to see my friend in that pic!

Thank you for taking the time to write this article and share your experience. I enjoyed reading it.

I love everything about this!

I love this! Thanks, Mateen, for writing so honestly about your experiences. Also, that ride sounds super fun!