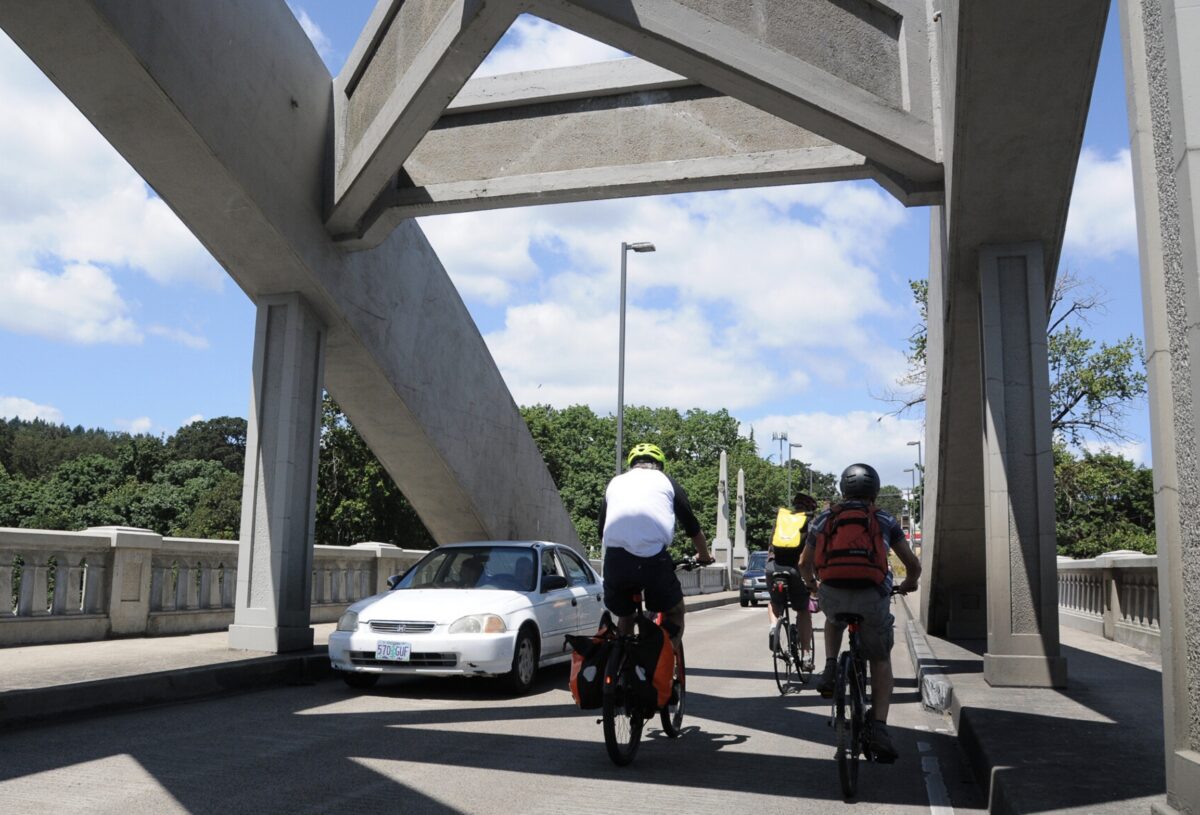 The current bridge isn’t ADA compatible (not to mention it has no space for cycling).
(Photo: Jonathan Maus/BikePortland)

Back in September we shared news of an exciting project to determine the feasibility of building a new, carfree bridge over the Willamette River between Oregon City and West Linn.

Now the project has a website and ODOT is looking for people to join the official advisory committee. They’ve also set the date and time for the first committee meeting.

According to ODOT’s website, the Oregon City – West Linn Pedestrian and Bicycle Bridge Concept Plan is needed because the current bridge lacks bike paths or sidewalks that meet ADA standards. The plan will:

— ​Identify a safe, separated option for a crossing between West Linn and Oregon City.
— ​Connect important regional bicycle and pedestrian routes.
— ​Provide opportunities for investment in West Linn and Oregon City, including the Old City Hall District, Industrial Heritage District, Willamette Falls Downtown District and downtown Oregon City.
— ​The plan will include technical analysis on the alignment options which will assess bridge feasibility, integration and connectivity to the adjacent biking and walking networks.

ODOT also needs more people on the Project Advisory Committee. Everyone is welcome to apply and applications are due tomorrow (Friday, January 22nd). You can find the application on the project website.

I wonder if some creative pushbuttons and traffic signals could allow the existing infrastructure to work. Possibly treating it as a 1-lane bridge for cars where you have to wait for vehicles on the other side and then you get a green light? Building new bridges is super expensive and we need to get the most out of our existing structures.

Oregon City Downtown is already heavily congested around the bridge so I doubt that would have political support from them.

Seems like another good reason to route vehicles from I-205 instead of across the arch bridge.

The irony is, if you did that, it would probably just be faster for most vehicles to use I-205 instead. It’s an unnecessary vehicle connection and should just be bike/ped.

Maybe when the geniuses shut down this bridge from 2010 to 2012 to rebuild it they could have brainstormed a way to have cars and pedestrians use it safely at the same time…
Because that’s what most bridges do…
They allow cars and people to cross over water….
I see people walking over it daily…
While I drive over it daily…..
If its unsafe for pedestrians to cross when cars are using it then EVERYONE who was involved with the multimillion dollar rehab of this bridge needs to be fired and sued…..
Can we please get some common sense in local government.
This is ridiculous…

I don’t know the structural details but it would have likely been possible to add. It’s on the historic register so modification would have been scrutinized. Another problem is the ROW at 7th and Main is too tight and a building would have to be leveled to widen the pathway and somehow integrate it with the already cramped OC downtown.

that was a state project, not a local project. the local govts of Oregon City and West Linn want to do the right thing but they are hamstrung by ODOT, the state agency that controls the arch bridge. Common sense is not lacking in local government but may be lacking at the level of government that controls this bridge.

Re: Bridge Oregon City- West Linn.
I am fairly new to this area and want to give my impression as a novice in this discussion. I use the arch bridge fairly often on my bike and manage to ride on the narrow sidewalk with some trepidation. An additional pedestrian/bike bridge is necessary in the vicinity of the arch bridge if it cannot be modified for additional non-motorized traffic. On the other hand, I heard about the widening project of the I 205 bridge over the Willamette River. A lower level addition for non-motorized users, quasi hanging under the car traffic lanes, could be a less expensive solution than a new bridge. I have seen and used such a structure over the Rhône River at Tarascon, Southern France. While the location of such structure would be somewhat removed from downtown OC, it lends itself to getting traffic away from the congested downtown area. Perhaps an additional smaller bridge in the vicinity of the arch bridge will become necessary too. Hans Tschersich, Gladstone

All of this is being done in the context of a massive highway expansion project that will rebuild 8 bridges on I-205 and expand I-205 to three lanes. Money for the highway expansion, which breaks ground in 2022, will presumably come from tolling. Money for a new bike/ped bridge is not identified so you know how that goes. Plan, plan some more, wait a decade, plan again, wait another decade….