No Peacock Lane. No Bike the Lights. Check out Starkwood instead!

(Houses with holiday lights in the Starkwood neighborhood. Photos by Tom Howe)

With both Peacock Lane and Bike the Lights cancelled this year, Tom Howe from Puddlecycle shares his route and tips for a new destination full of bright lights and holiday cheer. 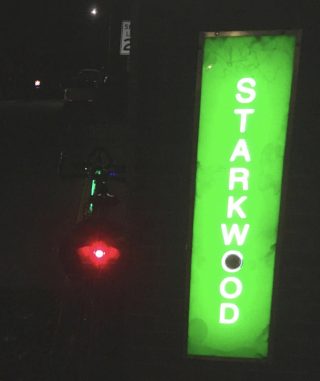 You’re on the right track when you see this sign.

A neighborhood along Southeast 111th Street known as Starkwood is a great alternative to Peacock Lane for a holiday bike ride. Nearly all of the houses on several cul-de-sacs off 111th are decorated!

From inner neighborhoods you can take MAX light rail and the route is a short, three-mile round trip from the SE Main Street station. This station also has a Park & Ride lot and a carfree bridge over the freeway to the I-205 bike path.

The 3-mile route (see it on Ride with GPS below) begins on SE Main Street at the spiral ramp of the I-205 pedestrian bridge. Riding east, the first bit holiday cheer is a row of about a dozen decorated trees at Adventist Health (10000 SE Main St). The route then veers left onto SE 106th Avenue and then right onto SE 108th into the entrance of Floyd Light Middle School. A paved path connects this school to SE 111th Avenue, but you’ll want to turn right onto 111th to work you way over to the crosswalk at 113th. This crosswalk has a rapid flash beacon to help you cross Stark so you can then ride the sidewalk into Starkwood.

The entrance to Starkwood has a welcoming green sign, but the neighborhood initially doesn’t look like much. But once past the sign, the decorated houses come into view. I usually ride all the way to the north end of 111th, and then roll leisurely through each of the three cul-de-sacs on the way out. On my past visits to Starkwood, I’ve never seen people walking around looking at the lights, and there’s usually no more than a handful of drivers in cars at any given time. Many people driving by on Stark have no clue this place even exists.

When you’re ready to go, use the parking lot of the apartment building, which drops you onto the Stark Street sidewalk at 110th. Ride the sidewalk to 108th and use the stop light signal to cross Stark and make an immediate right into the Stark Street Island. This island is a park formed where one-way SE Washington Street and one-way Stark Street combine into the busy two-way Stark Street further East. Riding through the small park you wind up back on SE 106th Avenue for the remainder of the ride along the same route back to the MAX station.

(Note to families: Given the short distance and flat terrain of this ride, it fits the Madi Carlson definition of a family-friendly bike ride, but there’s still busy SE Stark Street to cross to get into Starkwood itself. To deal with that street, the route uses two signalized crosswalks and four blocks of sidewalk to avoid ever riding directly along Stark itself.)

Another prominent neighborhood similar to Starkwood is Ridgewood, which is all the way across town down in the Gladstone area. Coincidentally, Ridgewood also consists of a larger main street and three cul-de-sacs. Please post in the comments any other bikeable groupings of holiday-decorated houses you’re aware of. Enjoy the season… by bike of course!

— Tom Howe
— Get our headlines delivered to your inbox.
— Support this independent community media outlet with a one-time contribution or monthly subscription.

I like the Christmas lights but man this is not a good area to be riding a bike. Lots of speed and reckless driving. Be careful! Especially since this is to be enjoyed in the dark.

Thanks for the warning D’Andre. It’s also not a good idea to be driving like a reckless jerk either. I personally refuse to be held hostage by selfish drivers and while I understand the risks of streets in this area, I hope folks realize that scurrying away and cowering in fear from other road users only emboldens them and leads to more dangerous conditions for everyone.

You may call me a coward, but after too many brushes with death from inattentive and speeding motorists, I’m going to be a coward and live another day by avoiding the worst area in my neighborhood and go a different route. I’ve given up trying to be a person to force the issue (giving me my right-of-way) with motorists. They haven’t been listening during COVID and as my life is more valuable to me than trying to get folks to change that have no desire to and just don’t care for their fellow humans.

As an add on to Starkwood, the Cherry Park neighborhood just south of Adventist has some good lights. There was one especially impressive one at 101st and Harrison.

My mother in law and brother in law both live in this neighborhood, the lights are great but do NOT ride your bike. The neighborhood is all cul-de sacs without sidewalks. It’s bad enough for cars, you’re asking for serious trouble on bikes.

Cul-de sacs are dangerous for cyclists?

I don’t get the risk of cul-de-sacs either. Puddlecycle has had group bike rides to Starkwood in years past and there’s never been an issue with cars. There are only a few cars in the neighborhood at any given time, and they are driving slowly.

I think Steve was trying to illustrate how car-centric the neighborhood is, not that that cul de sacs are a specific hazard.

Here’s a route through Ridgewood, the other Christmas Street that’s similar to Starkwood with a main street and three cal-de-sacs. This route is just over a mile long, as it starts at a church just around the corner from Ridgewood Drive:

Ridgewood Drive is not too far from the southern ends of both the Trolley Trail and the I-205 Multiuse Path.

Not far from Ridgewood is “Schilling Lights on Lark” at 15909 SE Lark Ave. This is a house where the yard is full of holiday fixtures including an animated tree that all blink to synchronized music. I was there around 8PM and the music was playing out loud, but they also have an FM radio station at 88.1. This is the sort of Christmas house you see on the TV shows, and it’s only a few blocks from the I-205 bike path.