“This service outage is a good opportunity for leadership at Lyft to better articulate how their bike share systems plan to operate in emergency situations,”
— Tarani Duncan, bike share industry veteran

It’s another sign of our upside-down world that a public transit system launched with the promise of cleaner air is currently offline because of dirty air.

Hazardous air due to wildfire smoke prompted the Portland Bureau of Transportation to shut down the Biketown bike share system around noon last Friday. The agency said they plan to keep it closed, “until it is safe for people to return to outdoor activities.” The announcement hit different not just because of the catastrophic fires that influenced PBOT’s decision, but because it came less than three days after a brand new system powered by electric bikes was launched.

As far as I can tell, this is the first time a bike share system has been taken offline due to poor air quality.

So far PBOT hasn’t gone into detail about their decision. Asked to elaborate on their announcement, PBOT Communications Director John Brady offered, “Given the hazardous levels of smoke in the air and the closure of other city facilities to protect public health, suspending Biketown until air quality improves was the prudent thing to do.”

Reaction to the move was swift and mostly negative (at least from people on Twitter): 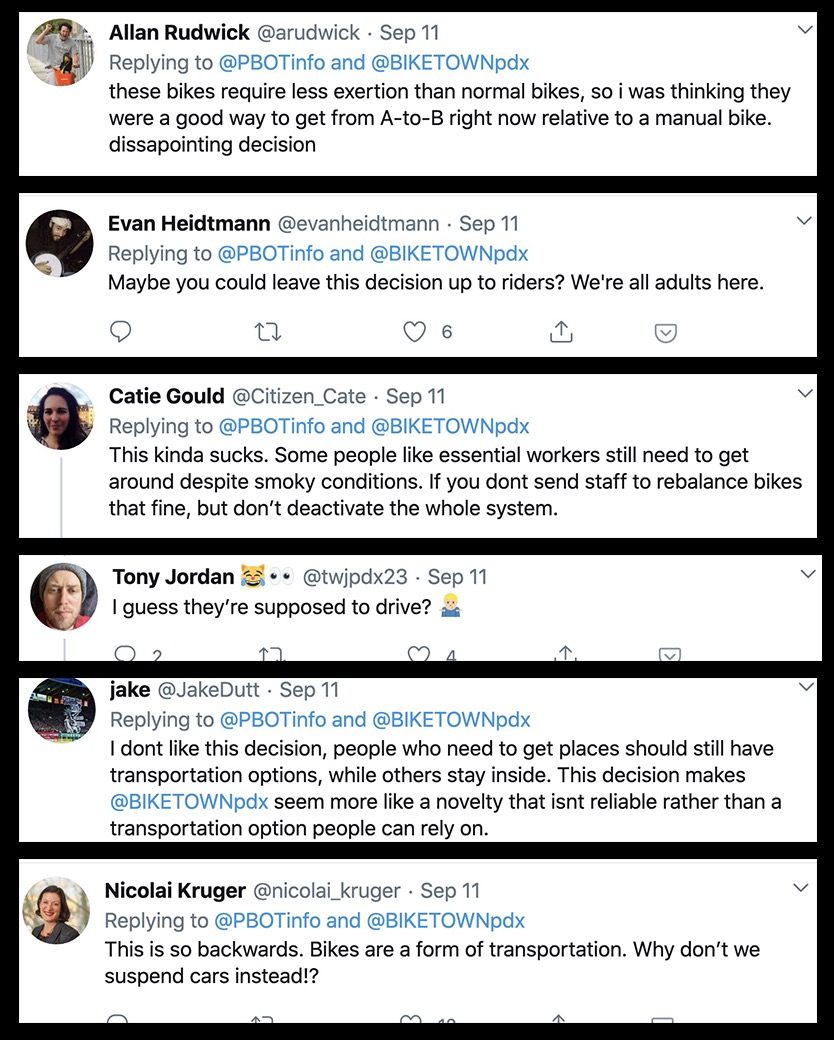 But industry expert and former Jump and Motivate Inc. staffer Tarani Duncan told us the unprecedented air quality crisis we’re going through makes the move understandable. “It’s a very difficult choice to close down a system thousands of Portlanders rely upon for essential trips, but it’s a necessary one,” Duncan said, “Biking is active transportation, and with the air quality in Portland reaching hazardous levels, closing down the system is a matter of public safety.”

Duncan also points out that PBOT might have the health of Biketown workers in mind, not just riders. Calling it a “complicated logistics operation,” Duncan said the system can’t function properly without a sizable team to distribute and maintain the fleet of bikes. “Biketown personnel should not be required to work in hazardous conditions,” she says.

One of the reasons some people responded negatively to the announcement was that it came without any warning, clarification or reference to previously stated policies or guidelines.

Duncan qualified her support of PBOT’s decision by saying Lyft (who owns and operates the bikes) should do a better job during future disasters (which given onset of climate change will surely be more frequent) and that it’s time to create an emergency operations plan. “This service outage is a good opportunity for leadership at Lyft to better articulate how their bike share systems plan to operate in emergency situations,” she said. “It is important for operators to provide riders with a clear understanding of what level of service they can expect in specific emergency scenarios, so riders can understand the limits of their reliance upon these services before disaster strikes.”

Asked when we can expect Biketown to return, PBOT’s Brady said they won’t peg the decision to a specific Air Quality Index rating, but that they’re watching the forecast closely. “With air quality still well in the hazardous range and with little change in sight,” Brady said, “we have no immediate plans to resume operations.”

According to the latest analysis, this hazardous air might linger in Portland until at least Thursday and PBOT and other government agencies say the best thing to do until then is to stay inside if possible.

Is this precedent now for closing the bike share when heat waves, snow or big winter rain storms are forecast? They could also be hazardous to the rider and to employees.

I think there’s a big difference between toxic air and a winter storm. Specifically, the National Weather Service is advising people to stay indoors at the moment. This recommendation doesn’t coincide with rainfall.

I feel like this statement somewhat underestimates the severity of this air quality. In 0-110 degree Fahrenheit weather the average person can be outside without serious health risks provided they don’t overexert, hydrate appropriately, wear appropriate clothes and listen to their bodies (with very warm clothes you can be outside in even colder weather of course).

Currently the air quality is so bad we don’t actually know the impact of exposure. It is probably only safe to be outside at all (like even a few minutes) if you have both an N95 mask and goggles, which most people don’t do.

Obviously it is terrible for anyone who needs to get to work, but I would suggest honestly that most businesses should shut down to spare their employees the commute. I can’t blame Biketown for looking at the conditions and determining it’s not safe for people to ride, and I find the idea that people are informed about the risks and can make decisions on their own to be a bit too libertarian for my taste. I guess if you required people to wear an N95 or paint respirator+goggles, then they can make their own choices.

People need to sometimes travel in order to survive. Someone without any more food can’t choose not to venture outside for groceries. Many people have jobs, providing income they need to avoid homelessness, and they need to get to/from those jobs. Some people who use this service don’t have an “inside” to stay within at all. The principle that SHOULD be driving decisions here is least harm. And shutting down this transportation option is doing more harm, not less, because the only alternatives (alternatives now forced upon former users) are worse in every way.

It makes perfect sense for a business to protect its staff from undue / avoidable injury.

Though for a self service mobility company to close its service is another matter…not that I would recommend riding too far on these smokey days…Biketown riders may not have an option given the short notice and cost. (Which has more potential danger: riding a Biketown bike on level ground or coming out of work at night and having to wait 30+ minutes on a dark street with closed businesses for an unplanned bus ride on a bus that might not allow for socially distant travel?) And if PBOT requested this closure of its operator…did the City also close its public parking lots or garages?

Perhaps – this blow could be softened… if Lyft offered a discount during this closure…but I did not see one on the Biketown site or app.

An agency has shut down a mode of transportation to reduce respiratory illness?

Are those motorcycles or bicycles ?

I agree with the above-quoted jake. You can’t just shut down the transportation system because you don’t think people should be out in the air. They aren’t shutting down transit and freeways to reduce travel, and people still need to get around.

BikeTown is obviously a fad toy that doesn’t deserve the benefits of being an actual form of public transit. It’s no wonder that drivers of motor vehicles think they have control over us. They do.

Yes. Employees wouldn’t be so exposed if the bikes could be charged in some other way besides picking up every one of them, taking it a single location to charge, and then reversing the trip. Nuts. It’s as if Portland had only one Starbucks, or more accurately, as if you had to take your electric toothbrush back to the store for recharging.

what about employees of gas stations? Or bus drivers?

In a city where thousands of people gather to protest a police force that hits them with internationally banned chemical weapons, there’s sudden concern for respiratory health? Thousands of people have respirators and goggles, many purchased as protection from PPB’s use of chemicals, and those are the most likely people to be on bikes. If Lyft’s staff don’t have the appropriate equipment to work in these conditions then rebalancing can be suspended. Better an inferior system than nothing at all.

That said, this approach of harm reduction does have some promise. When PM 2.5 goes beyond healthy levels, maybe the sources (fireplaces and cars) should be shut down until the levels return to healthy levels. This has the added advantage of making climate-changing habits less reliable and may thus lead to a reduction in such firestorms in the future.

MaddHatter
Reply to  B. Carfree

“The sources” in this instance are large wildfires. And believe me, we’re trying to shut them down as well and as quickly as we can.

Rain Waters
Reply to  B. Carfree

All these shoulds and coulds are little but rearranging deck chairs on the Titanic. It would appear our ships going down whether its brass handrails are polished or not.

I see Portland has closed all parks and natural areas due to the smoke. Just curious if that includes the Springwater Corridor and other trails.

“Effective immediately – all Portland Parks & Recreation parks and natural areas are CLOSED to the public per an emergency order issued by Mayor Ted Wheeler.”

Filing this one with all the thoughts and prayers. Also the ±10 speed limits, come to think of it.