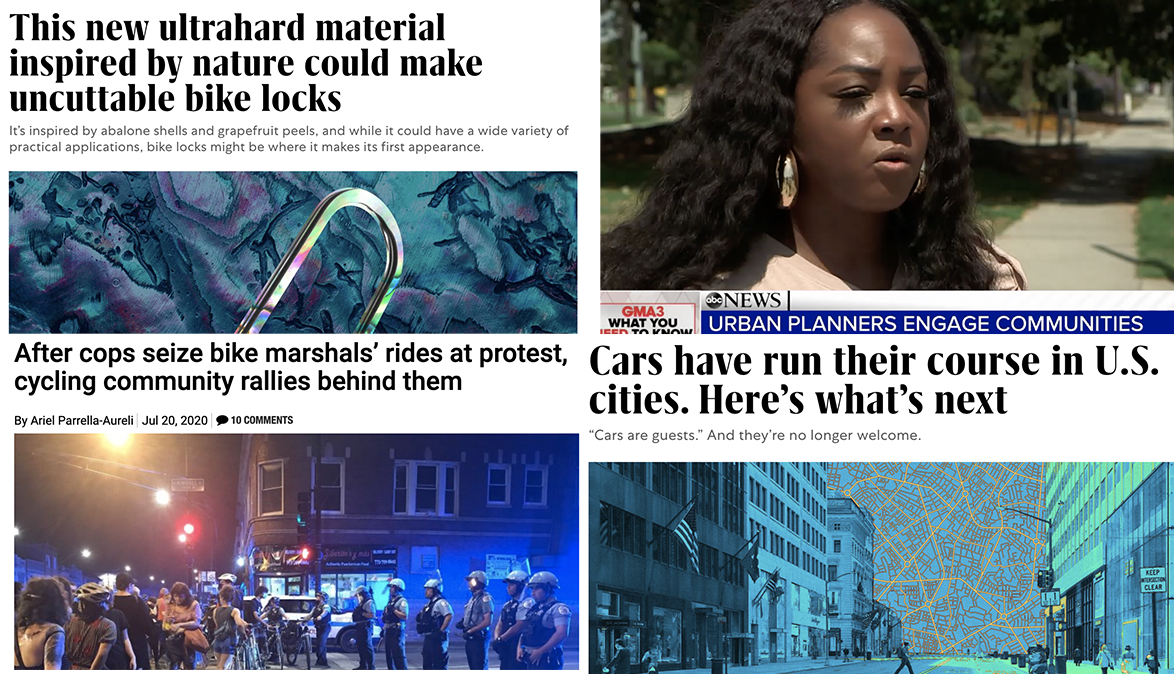 Here are the most notable items we came across in the past seven days.

Onion’s overpass: Terribly on-point piece in The Onion about a new government program to provide shelter to evictees via a 35-mile overpass.

Big PR for antiracist planners: A planning firm led by Black women that aims to atone for racism by changing how cities are designed and built earned major airtime on ABC’s Good Morning America.

Unbreakable: A new material made from, “ceramic spheres embedded in a cellular structure made of metallic foam,” shows promise as a theft-proof U-lock.

Old bikes, new uses: Thousands of used bike share bikes will be saved from the scrap heap thanks to a nonprofit in Buffalo, New York that use them to create free “transportation libraries.”

Biking while Black: Bicycling and walking advocates in Kansas City, Missouri are going through state statues and working to erase laws that give police officers unnecessary opportunities to stop and hassle Black road users.

Bike marshals: When people used bikes to support protests in Chicago, police confiscated dozens of them and the community rallied and raised money to replace them.

More on the end of cars: “Chiefly relying on cars as a form of transport has run its course,” says this piece in Fast Company about how cities are re-imagining transportation in the COVID era.

Death by gentrification: Attorneys represented Breonna Taylor say the police who broke into the home where she was shot to death were serving a warrant predicated on clearing out the property for a redevelopment plan.

Better police bikes: A new company named after a slavery abolitionist event and run by a Black man aims to sell high-tech police bikes at a time when policing and police bikes have become controversial.

Devices for ransom: Hackers have taken down the the software that runs popular Garmin GPS and fitness devices and they want $10 million to hand it over.

Video of the Week: Gain some perspective from this “Disabled People Do Bike” video created by nonprofit Rooted in Rights:

The way things are going, we will get those new un-breakable ceramic sphere bike locks and the bike thieves will show up the next day with metal cutting lasers.

Or, having discovered the material is brittle, a hammer.

I reckon the “statues” above was meant to read “statutes”.

Uncuttable bike locks sound good, but the bad guys will just switch back to using jacks to force them open, right? It will take longer than using an angle grinder, at least.

Middle of the Road Guy
Reply to  dan

Bad guys are just redistributing wealth, one bike at a time. These heroes should be celebrated!

dan
Reply to  Middle of the Road Guy

Bad guys are just redistributing wealth, one bike at a time. These heroes should be celebrated!

Says the guy using the Internet built with government funding that came from tax dollars. If you want to be free and clear of the taint of taxation, you have your work cut out for you.

Funny, these redistribution experts don’t pay any taxes. They do expect YOU to take care of them. I am not interested in their bad choices and I wish the internet was still in Al Gore’s pocket.

Pete
Reply to  Middle of the Road Guy

Middle of the Road Guy
Reply to  Pete

I own the whole DVD set 🙂

If the police and fire departments can’t cut through the locks, they’ll not be at REI or your local bike shop. However, certain importers will still sell them.

More likely the thieves will simply cut your frame and steal the parts later. I’ve seen several poorly re-welded frames (usually on the downtube) in the last few years, most likely victims of theft cuts.

Kryptonite, which already makes a 9/10 “New York” U-lock (and a 10/10 Forgetaboutit New York), should introduce a 15/10 “Portland” lock with this new material plus a tiny hidden tear gas/red paint canister that explodes when a thief tries to pry it off. They could color it the same as the Portland city flag – green, yellow, blue, and white.

You just need to run faster than the slowest person running from the bear. That is, your bike just needs to be harder to steal than the next one over, and this sounds like promising technology in that respect, especially if it can weigh less than a “New York” lock.

Those who really need to get through such a lock can always fall back on a plasma torch or thermal lance. Which is also why this stuff won’t be used for bank vault doors. (Maybe as one layer within one though.) A huge mass of steel resists torches and explosives in a way that ceramic balls in a metal foam probably would not.

No, you need to be the person not stupid enough to try to run away from the bear.

The material may be strong, but I’ll be you’ll be able to unlock the thing with a Bic pen.

Onion’s overpass: I know it was meant in fun, but there’s an actual 50+ mile continuous bridge section of freeway in Louisiana connecting to New Orleans that goes through swamp.

Per the Onion Over Pass Housing: this is just returning to the past…over history as transportation modes becomes less polluted then bridges (and viaduct) design begin to integrate uses of these secondary spaces…like Ponte Vecchio…or the railway arches in Berlin (Berlin Stadtbahn, coverted from coal to electric power).

Perhaps someday our freight highways will become “emission free” …and we can have housing or offices or entertainment districts under the I-5 (or I-205) bridge. [Image the territorial views…and arriving by light rail..plus the rent would help maintain the structures. The DOTs have to become more financially resilient and look for more diverse forms of ‘rent’ income.)

B. Carfree
Reply to  Todd/Boulanger

And to think I thought I was all alone in thinking the I-105 freeway in Eugene (and many other freeways) that ODOnT keeps spending money widening and retrofitting would be a great place for housing. It’s got a lovely bridge, if you take away the cars, right over the Willamette. All it needs is a bit of reinforcement to support housing/restaurants/whatever. Maybe we can squeeze in some housing up top for all the people living underneath it.

the video of the day is very inspirational! Anyone designing public spaces and infrastructure should see that. There is so much public infrastructure that could be hugely improved if the designers were thinking of people like this instead of just trying to meet ADA minimums.

Thanks–I missed that. A lot of public projects here don’t even come close to meeting ADA standards. When I point it out, often the staff don’t know the regulations, and especially don’t think about their intent. It’s rare (with some great exceptions) for staff to think beyond regulations, and to consider things like quality of experience. So you end up with say, a trail that’s “accessible” but that doesn’t allow someone in a wheelchair to see the view.

Thanks for the comment or I’d have spun right by it. It’s bad enough that bike thieves suck, but there should be a special place in hell for those who steal bikes from these people.

Where I live we spent millions installing wheelchair tread on several intersections that span a considerable distance between signalized crosswalks, leading into a 35-MPH 4-lane road that’s more like an expressway. When an elderly woman was killed walking across the street at one of them, I challenged the police to correct their report saying she was “not in a crosswalk” given our state’s law defining a crosswalk wherever there is an intersection, regardless of markings. (I won’t even go into the outlandish ignorant speculations and vitriol in comments on the news releases).

RE overpass: How about a 1 percent tax on all road projects in Oregon to fund homeless shelters? Kind of like the 1% for art, but 1% for shelter. Of course, this could require people to care one percent as much about people as they do about freeways.

RE ceramic lock: Will there also be ceramic bike racks, parking meter poles, etc? A better idea may be a tile-like device embedded in the frame and police that give a pooh about bike theft.

Middle of the Road Guy
Reply to  Overpassed

Why limit it to road projects? Seems discriminatory.

Pete
Reply to  Middle of the Road Guy

Thanks for posting the story about disabled riders, Jonathan.

What on earth about this comment motivated people to give even a single down vote?

In adherence to my general policy of downvoting everyone who complains about downvoting, I came here to downvote you. But then I saw the comment you were referring to, and I find I agree with you. I’m making an exception. I’m going to upvote you! Done!

I really wish Bikeportland didn’t have upvotes and downvotes. I’d rather people focused entirely on the content of each comment instead of getting distracted by a series of meaningless polls. Just my two cents 🙂

I hear you Sam. I think the experiment with downvotes is over. We’re going to disable them and just have upvotes only.

Uncutable locks, until they make a grinder out of the same material!

The Breonna Taylor article is over three weeks old, and itself contains a link to a newer article quoting several people refuting the claim. I wonder if there is newer information available?

Lots of downvotes for doing a little critical thinking. Sounds about right.

(And to be clear, I’m not questioning that what happened to Breonna Taylor was horrible and wrong – I marched in a Minneapolis demonstration specifically demanding justice for Breonna – but I’m just trying to sort out whether there actually is something to the claim that the warrant was actually related to trying to clear the property for redevelopment).