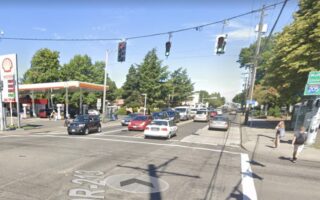 Imagine if Portland could ask for a carfree lane on 82nd Ave. Then imagine if ODOT actually listened.

Imagine that. A state DOT voluntarily banning automobile users from lanes and even complete roadways all in the name of safety and health.

The initiative is a joint effort of the state’s health, economic and transportation departments.

Four types of changes will be considered on a temporary basis (up to 90 days) and only on highways with a speed limit of 35 mph or lower:

• Partial highway lane reallocation – temporarily reallocates a portion of highway lanes to provide access and public space for active transportation, and retain a minimum of one lane for through vehicles in each direction.

• Full highway lane reallocation – temporarily reallocates a full highway lane to provide access and public space for active transportation, and retain a minimum of one lane for through vehicles in each direction.

• Complete highway reallocation – allows complete active transportation accessibility and removes vehicle traffic from a section of the entire roadway. Complete reallocations should be limited in duration, such as for weekend closures, and Saturday or Sunday partial or full day closures, and may require a signed detour route.

Cities and towns will have to create a traffic plan and submit a formal request to be considered by WashDOT. “Towns could use this reallocation to test and learn from changes they might want to consider implementing in the future,” the state agency said.

It’s great to see flexibility and forward-thinking from a state DOT. That’s something totally foreign to us here in Oregon.

35 mph seems to be a magic number in many states, the difference between a street and a highway for many city and state traffic engineers. Rarely anything to do with safe design nor surrounding land uses, alas, but more to do with hierarchical traffic classifications (twice as many collector street miles as arterial street miles, etc.) I’ve seen far too many narrow streets that posted 40+ mph (and allowed 60) and of course super-wide multi-lane arterial “streets” with 25-30 mph posted speed limits even as everyone, police included, are driving 50+ to catch that next green light, in downtowns, suburbs, and rural areas.

I appreciate Washington DOT pushing for this, as it might help us push our other DOTs (state & local) to allow for such lanes. But it still doesn’t help much with the already inadequate pedestrian crossings on such roads, both parallel and perpendicular to traffic. And we still have to deal with scofflaw speed demons in their high-performance SUVs, roadsters, crotch rockets, and 750W “electric bicycles.” Is Washington DOT proposing to also step up speed enforcement?

Every crosswalk needs real overhead lighting, not the night-lights we have here in Portland. That MIGHT save a vulnerable user from a hit-and-run.

David: good point…the whole movement by the FHWA into Context Sensitive Design (back in the 2000s) was supposed to “correct” this mid century legacy of deprioritizing how operational / design issues would reinforce existing pedestrian landuses.

Editing error in the last line?

“That’s some [something?] totally foreign to us here in Oregon.”

Thanks for this good reporting, which feeds our OIC (= Oregonian Inferiority Complex: a condition that makes us wonder why we can’t have Nice Things like other states).

Additionally…a related but separate topic: why is it more common for some states to set their minimum school zone speeds at 25 mph (or 20mph) vs. 15 mph in some eastern states, like PA? (Are our children 20 to 30% more robust when getting hit by a motor vehicle or are the eastern drivers / cars worse at driving safe?)

Here in Greensboro NC it’s 25 mph near elementary schools, but our streets are as wide or wider than Portland’s. Pennsylvania has a lot of cities with very narrow public streets, more similar to England; might the prevailing street width have something to do with it? On narrow streets, drivers are more inclined to go slower and be more cautious. maybe? I know wider streets certainly encourage people to drive faster, and given the prevalence of the old 85th percentile rules, might cities respond by allowing for faster car speeds? I could be wrong, but I have yet to visit any US city where the city is designed with pedestrian safety and convenience in mind**; the priority seems to be always towards the fastest mode.

**The old city centers of Charleston SC & Savanna GA are very pedestrian, as are some university towns, but their respective suburbs are all too car-oriented, alas.

That’s a fitting picture of 82nd & Glisan. The gas station and the property to the north are both being demolished to build a bigger and “better” (?) gas station and convenience store. I’m hoping this somehow makes the sidewalk & corner better, but…
https://montavilla.net/2020/06/15/demo-for-mega-gas-station/