First look at #OaklandSlowStreets plan and how Portland could emulate it 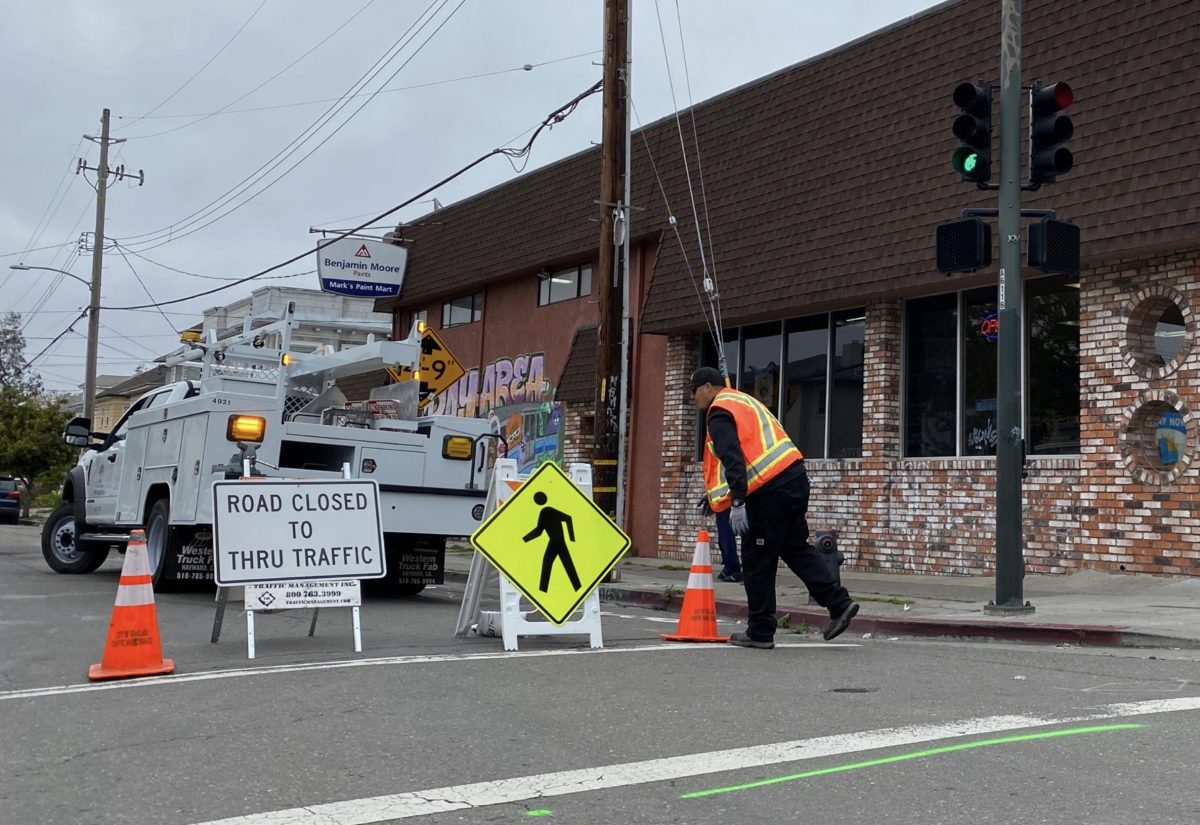 As the City of Portland continues to ponder what — if anything — they’ll do to adapt streets to the Covid-19 outbreak, Oakland residents are already enjoying the fruits of their city’s decision.

(Photos of Oakland streets this weekend).

On Friday we shared how the Mayor of Oakland had a much different reaction than Portland Mayor Ted Wheeler to the dramatic shifts in road usage and need for safe social distancing.

Oakland’s effort started Saturday with temporary barricades and cones being erected on a handful of streets. The city’s transportation department has also laid out details of their plans on their website. As I read through them, I was amazed at how many of the ideas mimic what we’ve been highlighting in the past month.

To refresh, Oakland plans to change 74 miles of neighborhood streets — about 10% of the city’s total — into “Slow Streets” where through driving traffic is no longer allowed. Based on photos from Oakland DOT, the changes are being made with barricades, traffic cones and the standard, “Road Closed to Through Traffic” signs placed at the beginning of each block.

The idea is to, “Discourage drivers from using Neighborhood Bike Routes unless necessary to reach a final destination… [so] that people can more comfortably use these low-traffic streets for physically distant walking, wheelchair rolling, jogging, and biking all across the City.”

There are four things that stand out to me in Oakland’s plan:

⇨ First, instead of worrying about how the public might misinterpret the changes, they’ve taken control of the messaging from the get-go. The writing on their website lays out the problem, avoids buzzwords and explains their rationale in clear and direct language. They are also explicit about what the plan doesn’t do: include police enforcement, limit emergency or transit vehicle access, or allow public gatherings of any size.

⇨ Second, they make it clear that the implementation of the changes is being done with existing social and economic disparities in mind. “The City will prioritize posting signage on routes in underserved communities,” their website reads. OakDOT also points out the fact that the virus crisis makes existing inequities — like low-wage earners and people unable to work from home or neighborhoods that have no park space — worse. “OakDOT seeks to reduce barriers to opportunities for physical activity and ensure safe transportation for our most vulnerable community members.”

⇨ Third, OakDOT is empowering the community to help. They tell people to download a new sign (not yet available) and post it along Slow Street corridors and spread the #OaklandSlowStreets messages on social media.

⇨ And finally, what I like about Oakland’s approach is that they’re not re-inventing the wheel. Instead of using the excuse that they don’t have time for a typical public outreach process, the Slow Streets effort relies on an existing plan that’s already been adopted. In their case it’s the Oakland Bicycle Plan and the routes they plan to change are part of the recommend bicycling network. Portland has a successful, well-connected, 100-mile, citywide neighborhood greenways network that — as suggested here in an opinion piece last month — could provide a similar foundation.

I’m hopeful that PBOT and Commissioner Chloe Eudaly’s staff are looking closely at Oakland’s efforts. While they are much denser than we are and they have a “strong mayor” form of government (thus making it easier for big things to happen quickly), Oakland looks like it could be a great model for us.

It’s worth noting that Mayor Ted Wheeler just issued a vague tweet about an hour ago, four days after his first comments on the topic on Thursday (after which he was hounded by Portlanders disappointed with his stance).

“We will continue to adjust and adapt to what’s in the best interest of public health,” he wrote. “Please continue to follow our Commissioner in charge of PBOT, @ChloeEudalyPDX, as well as @PBOTinfo for the latest updates. More to come.”

Read more about the Oakland Slow Streets program here. Also, there’s a free webinar coming Wednesday from the National Association of City Transportation Officials (NACTO) on, “How street design and policy can support public health goals during the coronavirus emergency.”

The city should really do something about the St. Johns Bridge…or is that managed by ODOT? In any case, it’s impossible to socially distance on the sidewalks and riding or walking on the bridge deck is taking your life in your hands. Would love to see it go to one lane each way for the duration of the pandemic – it’s not like there’s any traffic now anyway – with the extra lane for muscle-powered transportation.

I moved from Portland to SLC a few months ago, and now we’re planning on closing some streets to cars as well during this time (http://twitter.com/slcmayor/status/1249755005172633602). If Salt Lake can do it, Portland should be able to as well! PDX is really is lagging behind the curve here!

Thank you for publishing this. It was very useful checking out the City of Oakland website, especially as my own community is trying to implement a series of pop-up bike lanes. While we would love to do what Oakland is doing (and that Portland could potentially do), unfortunately our own local community bike plan that was adopted by our council in 2016 has no local community bike routes in it. Instead, it relies entirely on bike lanes, sharrows, and protected bike lanes on arterial and collector streets – clearly an operational gap that needs fixing, but for now the plan we have is the one we’ll have to use.

The listing they have for the “why” of doing it is especially well-written and thought-out – what we need to convince our conservative city councilors and the even more conservative city manager and department engineers.

If street racers can shut down the upper deck of the Fremont Bridge while they spin donuts (and not a cop in sight), why don’t bicycle riders and walkers shut down any other street by simply doing it?

Keep the pressure on, Jonathan!

We should have had frequent, permanent diverters on every single neighborhood greenway years ago. This is the perfect time to push PBOT to do the right thing.