“This pass is the financial piece of a broader plan that seeks to create the actual and political resources necessary to build a comprehensive resilient transit system in the Gorge.”
— Patricia Fink, Columbia Area Transit

At the start of this month, the Hood River County Transportation District (a.k.a. Columbia Area Transit or CAT) launched the GOrge Pass, a golden ticket that allows unlimited rides on the Columbia Gorge Express, every regular CAT bus line, and CAT’s Gorge-to-the-Mountain ski bus.

If you’re on the fence, consider that this is about much more than a transit pass. According to CAT Executive Director Patricia Fink, sales of the pass are a vital piece of the transit agency’s vision. Put another way, when you purchase a GOrge Pass you are actively playing a role in making transit between Portland and Hood River better and more accessible to all.

Fink and her colleagues know that great transit service in the Gorge — for residents and visitors — is tied directly to economic development, the fight against climate change, affordable housing, and the severe congestion and parking problems the area struggles with. 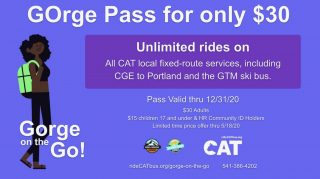 On February 11th Fink told members of the Columbia River Gorge Commission about how the pass is such a lynchpin to their goals: “This pass is the financial piece of a broader plan that seeks to create the actual and political resources necessary to build a comprehensive resilient transit system in the Gorge,” she said. “One that not only links and serves the commuter and recreational needs of the Portland Metro area with the mobility and access needs of the Gorge’s rural communities, but also offers rural and urban residents a new way of thinking about how they live and how they travel in the Gorge.”

Late last year CAT was awarded a $1.8 million grant from ODOT’s Statewide Transportation Improvement Fund (STIF). The grant requires a local match and it’s only for start-up operations. “The award was made with the understanding that we would have just 18 months to build program ridership and create a more sustainable partnership for funding,” Fink explained to the Commission.

CAT is working with the City of Portland to take over an on-street parking space at Gateway Transit Center to park a bike trailer their bus can pull during peak summer months.

She estimates they need to sell a minimum of 10,000 passes this year and twice that amount each year for up to five more years. As of today they’ve sold 1,343 passes (the program launched February 4th), with over half through large Hood River employers.

It’s an ambitious goal, but Fink and her team are committed to making it happen. And they’re counting on Portlanders who value the Gorge and transit to help. If you love biking in the Gorge, consider that all Gorge Express buses have bike racks and CAT is working with the City of Portland to take over an on-street parking space at Gateway Transit Center to park a bike trailer their bus can pull during peak summer months.

Grab a GOrge Pass and get a ticket for great riding and explorations while doing your part to support better transit service for everyone else. I already got mine. See you on the bus!

Any idea if dogs are welcome on the bus? I looked on the website but could not find that information.

thanks Valerie, I had not found that. I wish we could get some transportation alternatives that actually provide alternatives to a car! It is so hard to take a bike or a dog somewhere, it is no wonder almost everyone drives!

Is it ever a problem finding a space for your bike on the weekends? Or just getting a seat in general? The buses don’t run very frequently, so it would probably tank your long-ride plans if you couldn’t get on the first morning bus (or what happens if there isn’t space on the last bus home?).

There will probably be a space for your bike on the bus. I have ridden the CAT many times.

In the off season and on weekdays, the bus gets very few riders and bike storage is rarely used. One time I was the only person on the bus all the way from Hood River to Portland.

On a nice summer weekend day it can get busy between multnomah falls to gateway, but I haven’t seen it “full” yet. The chances of having a spot for your bike are pretty good even then. The big bus with the storage bay below has lots of space there. Several bikes could fit. But it is not padded and unless your bike is boxed it’s subject to whatever happens down there during the ride. It will need to be laid sideways because the area is not tall enough.

The big bus with storage below is usually the one used for the Portland-Hood River run from what I have seen. But the smaller bus has 2 or 3 spaces for bikes up front. So it’s a bit of a gamble. One option is to “rinko” your bike and take it on board. I take my folding bike on board all the time.

Thanks for the great intel, Doug!

My kingdom for an “edit” button..

Thanks for the great intel, Drew!

I see. I see. So… why are riders paying for it?

Middle of the Road Guy
Reply to  Mick O

Because the riders value that service and those services are not free.

Mick O
Reply to  Middle of the Road Guy

What is your basis for disagreeing with that? Or are you just against economic development?

Middle of the Road Guy
Reply to  Mick O

It’s heavily subsidized (and likely unsustainable.) Of course people should pay to support the service.

Why not just give the money directly to the businesses then?

She estimates they need to sell a minimum of 10,000 passes this year and twice that amount each year for up to five more years

This, plus the prospects of a low level of tourists in the gorge this summer should make traveling to favorite spots easier than in any time in recent memory.

I would buy this pass right now if the Columbia Gorge Express still stopped at Rooster Rock! What the heck?! It used to. Kinda defeats the purpose for me during the summertime.
I left a comment on their website. Anyone who feels the same way, please do as well. 🙂

The Columbia Gorge Express shuttle will serve Rooster Rock in the summer (Memorial Day through Labor Day). This seasonal shuttle service will continue to be operated by ODOT to manage parking congestion at Multnomah Falls and to maintain the connection between Gateway Transit Center and Rooster Rock.

The GOrge Pass will be accepted on both CAT and ODOT services.

So you’re saying the GOrge Pass will work on the ODOT bus to Rooster Rock in the summer? Cuz that’d be great!

Sign up for ODOT’s Columbia Gorge Express newsletter if you’d like to receive email updates regarding the summer shuttle schedule. Visit https://columbiagorgeexpress.com/ and scroll down to the bottom of the page.

They could really use a good map of all routes on one page. Clicking around it seems they have service along I-84 (Troutdale to The Dalles), 35 (hood river to ski areas) and 2 local routes in & around hood river.
It is nice to see service expanding and different options to pay being introduced

Can we bring baby strollers and dogs? It would be my wife, child, stroller and two corgis. I’d use this service over driving if so.

Just used my pass. Took the bus to Multnomah Falls, biked to Cascade Locks, spent the night, then on to The Dalles, second night out and bussed back this morning. Nice little trip!

When you bike from Cascade Locks to Hood River did you have to bike on I-84? I rode around Mt Hood and we had 2 scary sections along 84 that had a non existent shoulder with rumble strips next to concrete jersey barriers on the right and trucks going 70+ on the left. Left no room for error.

Barbara, you can ride the frontage road to Herman Creek Road out east from Cascade Locks and there is a newly opened section of multi-use trail beyond that where the shoulder used to be fairly narrow. There’s still a portion of I-84 that there are no other options for around Mitchell Point but if I recall the shoulder is a bit wider here.

What happens if there is no space for your bicycle? Pat Lowell (above) also inquired

You wait, just like for Trimet when you miss a Max or it’s too crowded. Consider it better than sitting in traffic…

Except with the bus only running 8 times/day, it’s a much longer wait, and could mean just canceling your plans depending on your timeline.
btw, I purchased a pass and look forward to using it, but I had the same question. Also wondering about capacity for mtb’s and fat tire bikes. I heard the larger busses have undercarriage storage, but I don’t know how to tell which bus will be waiting for me when I show up in Gateway. Or when I’m done riding the Oregon Outback and looking to get a ride home from The Dalles.

This is why I always ride my skateboard out to the gorge.