Did you get hit by driver of this red pick-up while crossing Martin Luther King Jr Blvd last night? 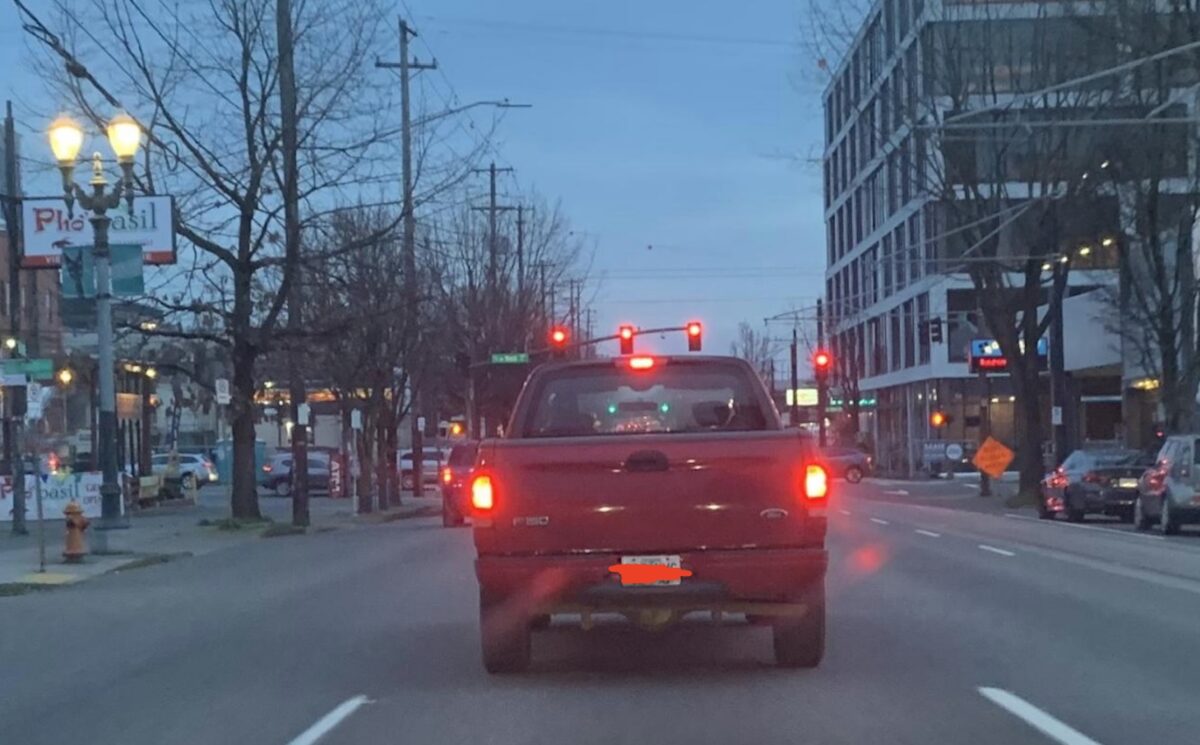 The driver of this truck hit someone riding a bicycle, then kept driving. UPDATE: The plate number is obscured because we’re looking for the victim, not the driver at this point. The police know the plate number.
(Photo sent in by a reader)

If so, a reader witnessed the crash, snapped a photo of the driver’s license plate, and wants to help you get justice.

Here’s the note we just received via email (along with the photo above):

I witnessed a bike hit and run, and wanted to know if there was something I should do about it – I saw the biker get hit by the driver of this red truck.

About 5:30 this evening [Tuesday, 2/11] a biker was heading east crossing the Burnside bridge, and so was this truck. The bike was in the bike lane, the truck was in the turning lane to go south on MLK, once across the bridge. The truck turned right on to MLK, and hit the biker as he was continuing east across MLK. He hit the biker, didn’t run over him fortunately, but didn’t even stop. Fortunately the biker did make it the rest of the way across the intersection. He probably has a bent up bike.

I was behind the truck that hit him and did see the biker head off. I snapped a couple photos of the truck, below, as he took off. I assume the cyclist is OK because he/she cycled off.

Not sure what to do, but I’d like the cyclist to know there was a witness (and a photo) to this unfortunate thing.

In case you’re wondering, I advised the witness to call the Portland Police non-emergency line (823-3333) right away. I’ve been told by several officers over the years that this is an important thing to do because if/when the perpetrator does something else later and someone runs their plates, this incident will strengthen the case against them and increase the likelihood of them facing some form of justice.

If you were the victim of this hit-and-run, I’d also recommend you call the non-emergency line. And please contact me so I can connect you to the witness. And sorry about what happened. Hope you are not too shaken up.

Things don’t seem bike friendly lately and its really nerve racking riding 🙁 lets look out for each other. some riders battle each other agh rant over.. take care

MLK near the Burnside bridge is a total s%^tshow these days. I nearly got head-on’d by a SUV driving down the short bike path ramp from Couch to 3rd Avenue a few weeks ago. The area has become super dense with pedestrian and cyclist use in recent years, but traffic calming hasn’t reflected this change. It’s a problem.

The amount of people on their damn phones scares the hell out of me. BE LOUD and be CAREFUL.

on side note anyway to report things that happen to us after trying to stay alive in the streets..
willaims is a total mess during traffic times or daily issues trying to share with auto traffic.. oh and DT maybe get a nice app design.

They just closed NW Davis between MLK and Grand long-term for a construction project, and for some sort of utility work at 7th, taking out another good cycling connection / route in the area. You can still use the south sidewalk on NW Davis between MLK and Grand, but it is now being encroached on by construction too, and it’s more difficult to trip the signals to make the two crossings now.

This whole area of inner SE is so goofy right now for everyone (peds, bikes, cars.) I was looking at the NO PARKING signs up on SE Everett and 8th and it looks like maybe they plan on being done in that area on the 28th? Who knows about Davis between MLK and Grand though, they’re excavating a parking garage, that one might be a long time. Eugh.

Construction closures seem to be allowed with no regard for connectivity of walking and biking routes. To make things worse, construction crews routinely spread over their permitted boundaries. So-called bike lanes are a favored place for setting up signs, parking pickups and storing materials. So much for those eight inch wide paint stripes.

HUGE THANKS to the driver who wrote to JM about this incident. Thanks for looking out for others!