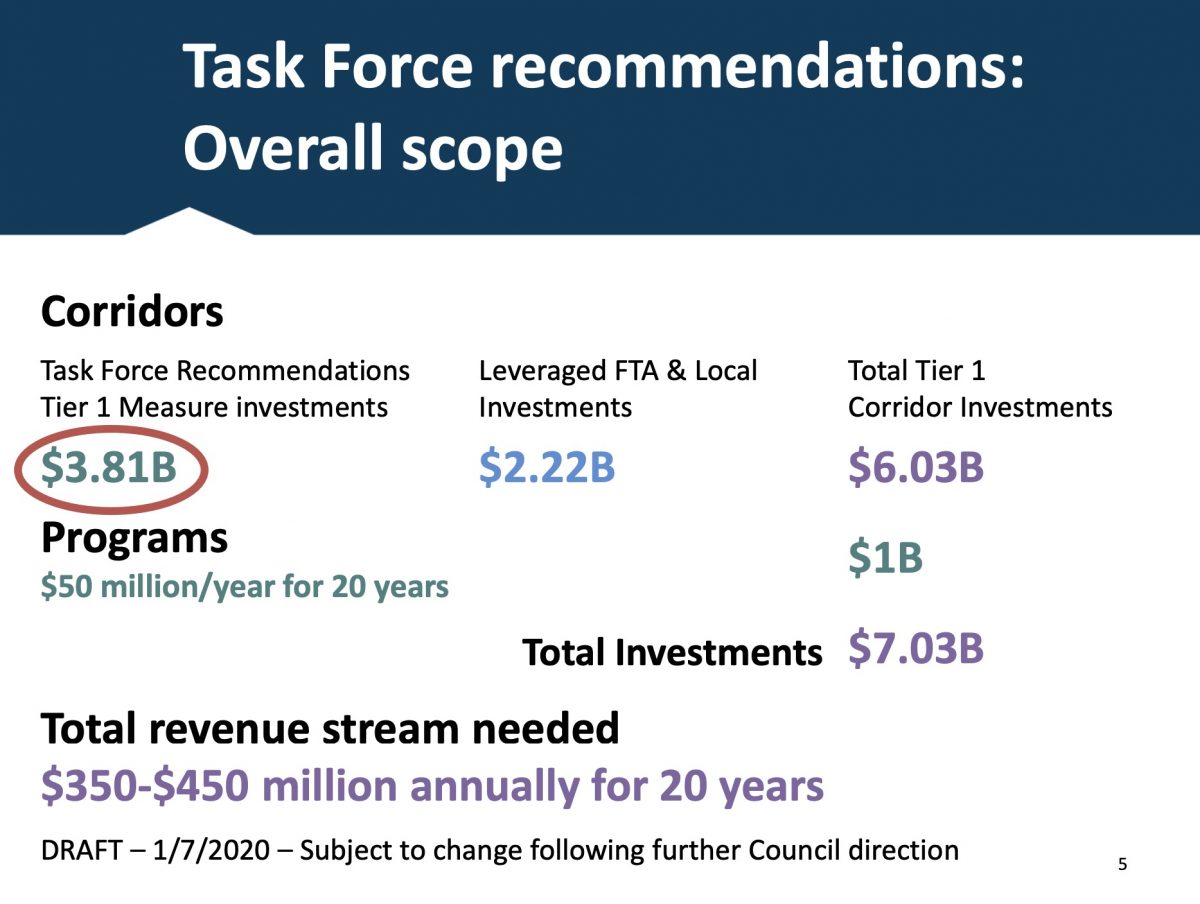 The task at hand.

Now that Metro’s 2020 Transportation Funding Task Force has decided which projects to fund, they need to figure out how to pay for them. 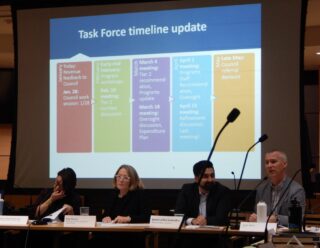 The 35-member Task Force held their 17th meeting Wednesday night at Metro headquarters, focused primarily on how to pay for the measure, which is estimated to cost $350 to $450 million per year for 20 years and is scheduled to go before voters on the November 2020 ballot. Also revealed at the meeting was progress on the development of recommendations, information about the budget, and the announcement of a new series of community workshops planned for February.

Before the session began, Metro Councilor Juan Carlos González asked for a moment of silence for Leslie Schmadeke, a walker who died on January 14th after being hit by the driver of a minivan while walking on Tualatin Valley Highway. González noted that Schmadeke was attempting catch a bus when she was struck.

After a brief public comment, Task Force Co-Chair Pam Treece gave a summary of the committee’s work in recent weeks. She said that there had been two Metro Council work sessions in January where discussion of Task Force’s recommendations were discussed. The most recent had taken place the previous day (January 14th), where, according to Treece, there had been a “spirited conversation” about the Tier 1 projects. She also noted that about 50 people testified at the Metro public hearing on January 13th, where Treece said she heard “overwhelming support for the recommendations,” as well as some critical comment.

As a result of the two Council work sessions, Metro staff were given the go-ahead to begin work on some parts of the Task Force’s recommendations. The Task Force’s other Co-Chair, Jessica Vega Pederson, specifically said that Metro staff were moving forward on the unanimously approved part of the recommendation. That portion, which was voted on at the December 18th meeting, amounts to about 80% of the entire package, per Metro.

Yet some recommendations are still being considered before further action, according to Councilor González. He said that Metro staff had been instructed to look more critically at the NE Airport Way/NE 82nd intersection (part of the 82nd Ave Corridor) and the new connector road in the Clackamas to Columbia (C2C)/181st Ave Corridor. Those two projects, both of which would involve the construction of new roads that would increase driving capacity, have been identified by the Task Force as potentially concerning when viewed in light of the Task Force’s focus on equity, climate chamnge, and safety. González also said Metro staff were in discussions with Clackamas County about their request to acquire a right-of-way for the Sunrise Corridor, a proposed new connector road just north of Highway 212.

Metro’s Director of Government Affairs Andy Shaw then spoke and revealed that Metro will be holding three community outreach workshops in February to gain feedback from local residents. Multnomah, Washington, and Clackamas Counties will each host a workshop, and there will also be a way to provide comments online. The feedback gathered from the workshops, whose dates and locations have not been decided, will be provided to the Task Force for consideration. 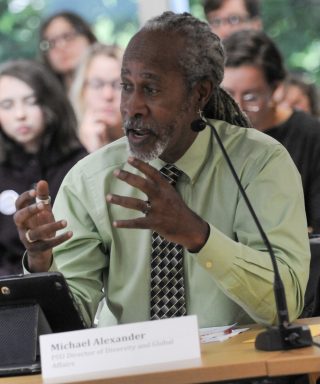 After that, discussion turned towards deciding the revenue mechanisms for funding the proposed bond. Shaw announced an updated budget which now stands at $7.03 billion. That total includes the Task Force’s spending recommendations of $3.81 billion, plus $2.22 billion in leveraged Federal Transit Administration (FTA) fund and local investments. It also includes $1 billion in planned program spending, which would be $50 million to be released annually for 20 years on projects beyond the Tier 1 corridors. Shaw said that $350-450 million would need to be generated annually in order to cover the bond’s costs.

Shaw then showed Metro’s staff internal analysis of the revenue mechanisms it believes are best suited to generating the necessary funding. He said Metro believes the most feasible options include an employer payroll tax, a vehicle registration fee, a business income tax, and a personal income tax. Metro is recommending against a property tax and Shaw said that a sales tax, regional gas tax, vehicle privilege tax, and corporate activity tax were also not feasible. Polling data revealed in December was brought up by Shaw to support Metro’s recommendations.

Task Force members were then given a chance to air opinions about the proposed revenue mechanisms. Members generally agreed that there should be multiple taxes offered to voters in order to build support and spread the burden equitably. Michael Alexander of Albina Vision Trust said any chosen revenue mechanism should not be regressive. The property tax found support from Linda Simmons of the TriMet Board, but hers was a minority position. Jim Bernard of Clackamas County, Portland Commissioner Chloe Eudaly, Mayor of Milwaukie Mark Gamba, Nate Stokes of the Union of Operating Engineers, and Wilsonville Mayor Tim Knapp all said they were against increasing the property tax. 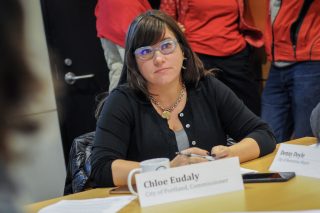 Commissioner Eudaly said that wealthy people and corporations should be those who provide the majority of the revenue for the bond, and proposed the idea of taxing commercial real estate. However, Andy Shaw of Metro said it wasn’t possible for local governments to distinguish between residential and commercial property for taxing purposes, leading Eudaly to argue that that sort of restriction was a fundamental problem. “We are trying to work around a crappy taxation system,” she said.

Vivian Satterfield of Verde NW agreed with Eudaly, saying that there are deep funding inequities at the state level and proposing to raise the personal income tax. Mayor Knapp of Wilsonville also said that there were inequities in the tax system, and the citizens should “consider working for structural change, not for this proposal, but for the next time.” Knapp also raised the idea of vehicle user fees, such as road tolls, an idea also brought up by Mayor Gamba.

The gas tax was also discussed, with some, such as Nolan Lienhart of ZGF Architects and Stephen Gomez of Business for a Better Portland, expressing support. Others, however, like Nate Stokes, Sheila Greenlaw-Fink of the Community Housing Fund, and Dave Nielsen of the Home Builders Association, voiced skepticism of a gas tax.

Though no votes were held during the meeting, Co-Chair Treece said that the comments provided by Task Force members would be discussed at upcoming Metro Council working sessions on January 28th and February 18th. The Task Force will meet again on February 19th, where “Tier 2” Corridor recommendations will be discussed. No firm confirmation was provided about when and where the upcoming community workshops would be held, though they should begin by mid- to late February.

— Ian Edwards @ianedws on Twitter
— Get our headlines delivered to your inbox.
— Support independent community media with a one-time contribution or monthly subscription.

They should just take all this money going to bureaucracy and more concrete and just pay people not to drive. A big fat C-note for each trip not taken in your car. It would be far more cost-effective even after the cost of setting up enforcement/monitoring.

Sort of along those lines, just pass a law forbidding ODOT from spending any more money on autos-only infrastructure. It is 2020 folks. High time to be done with the fossil foolishness.

Considering trucks use the same roads for transporting goods, I’m not sure how much “auto-only” infrastructure would not be constructed.

That does complicate matters.
Well, in that case, we should crank up the gas taxes, adding 30% per year, compounding. That should take care of it. And the money so raised must be spent disproportionately on alternatives to the auto so—-over time—-folks have the option of still getting around but without breaking the bank.

Taxes going up no matter how. But, what a waste of money. And with a major recession looming? Stay tuned.

Is Chloe actually proposing a wealth tax (by saying “the wealthy and corporations should cover a majority of the bond), or does she obfuscate the difference between wealth and income by choice?

One problem with creating large slush funds like what’s being proposed, is that politicians then tend to re-direct that funding towards their favorite pet projects, rather than what the funding was intended for. And depending what the tax base being used for the funding, they can legally get away with it.

We have a huge amount of property development going on in the whole metropolitan area. That means a lot of new property tax revenue. Where is that money going?