As I’m sure many of you have already heard, Portland lost a political star and community leader on January 2nd when City Commissioner Nick Fish died.

I was away on vacation when I heard about it. And even though I was aware of his fight with cancer, the news was still a shock. I’ve covered Fish since 2008 when he ran for Portland City Council. I’d just written a profile of his competition in that race and Fish called me the next day to introduce himself.

Over the next ten years I came to respect Nick for his thoughtful and earnest approach. Instead of getting offended or shooting off a passive-aggressive text or email when he had an issue with something on BikePortland, Nick would give me a call and politely explain his plans or point of view.

He wasn’t a huge champion for cycling issues, but he rode bikes and advocated for them when the opportunity arose. In my first conversation with him in 2008 he tried to convince me that he could still be a cycling advocate on Council even though he wasn’t an “avid cylist”. “I’m not an artist, but I don’t have to pick up a paintbrush to be a strong advocate for the arts,” he said, “and therefore I don’t have to be an avid cyclist to understand the issues involved.”

Most BikePortland readers will remember Fish for his work on the issue of more singletrack trail access in Forest Park. He learned a lot through what was a bruising process on all sides. During an interview with him about it in 2009, he said all the right things and tried to bring everyone together.

When it came to traffic safety issues, Fish could always be relied upon for strong support. When grieving moms who’d lost their children in traffic crashes testified in front of him back in November, Fish said, “If this moment of remembrance is to mean anything, it must be in service of us doing something different. I thank you for admonishing us to go beyond symbolism and to act.”

I’ll miss Nick Fish. May he rest in peace. 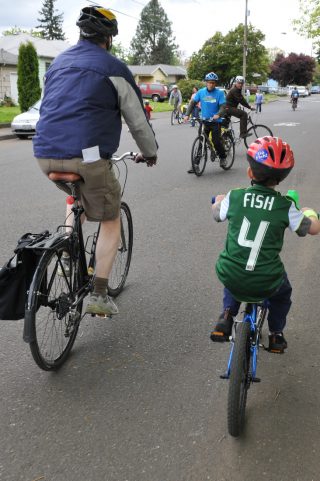 That was a very nice tribute, Jonathan. Thank you.

“He wasn’t a huge champion for cycling issues, but he rode bikes and advocated for them when the opportunity arose.”

Except, of course, that time he and Fritz meddled in public process to ban MTBing from River View and prevent any discussion of the subject.

I’m well aware of his record. I intentionally chose to not mention parts of it I disagreed with out of respect for him and his family. I hope you understand.

No one is suggesting you be disrespectful. You can be respectful, kind even, and still be honest about a person’s legacy.

Good point. I just didn’t think this was the right place or time to take that tone.

Your exactly right, Jonathan. Remembering Nick for all the good things he did is the right thing to do. He and I would at times disagree but I always appreciated his guiding principle to always do the right thing. There were many people I served with who I felt like I just had to deal with. Nick was a person who I personally benefited from just because I knew him. We continued our friendship even after I left the city council. I miss him already.

Given that Portland’s system of government lacks a professional city manager, he was the closest equivalent Portland recently had (Adams was also a good manager aside from his personal issues.) Fish proved it when he helped sort out the administrative and management messes at Water and BES, the city’s two largest bureaus in terms of budgets. However, the few times I had met him, I would never associate him with anything to do with transportation.

The first time I talked to him was in a Council hearing when I called a decision by his Parks staff “cavalier”. He asked me to explain why I used that term, and when I did, he agreed and took my side against his own bureau’s. After another time I testified, he left his chair and came down into the audience to ask me to help his staff improve the code changes so they’d address my concerns. Another time, he wrote me a personal thank you. His staff was ALWAYS available and helpful to me. He often was “the adult in the room”. I miss him.

I didn’t know Nick, but it sounds as though he lacked ego – a rare and invaluable trait in a politician. People with large (and growing) egos seem to gravitate to politics b/c it can feed their egos. Portland is really lucky to have had a public servant like Nick.

Are there any more ego-less people out there who want to run for public office? I’m looking for one who will end Portland’s obsolete “commissioner” system of gov’t.