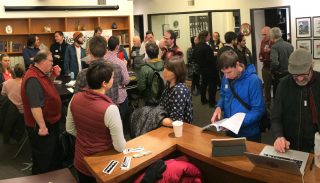 The idea behind Wonk Night is to go deeper into the issues, get questions answered, and connect with other people. Based on early reviews from last night’s event, it appears to have been a big success.

About 40 people braved a stormy evening and came together in the offices of Lancaster Engineering downtown to learn more about the I-5 Rose Quarter project’s environmental assessment (EA). We had drinks (thanks in part to an assist from The Street Trust!) and snacks (peanut M & Ms were a big hit) and plenty of copies of the relevant documents.

In the room was a healthy mix of Wonk Night regulars and new faces. There was a strong contingent of PSU planning students, a few agency staffers there on their own time, and activists and concerned citizens of all stripes. We had people like (poet) Alicia Cohen who’s just learning the ropes of activism, and veterans of freeway fighting like Jim Howell who was a key figure in stopping the Mt. Hood Freeway and founded Riverfront For People in 1969, the group that helped turn Harbor Drive into Waterfront Park.

Everyone in attendance expressed serious reservations about the project. Before we got started, I asked how many people in the room wanted to defeat it. All the hands went up.

Even with such strong sentiment in the air, the event wasn’t meant as an opposition rally. Our goal was to get smarter about the project and write better comments in response to the EA (the comment period ends April 1st). 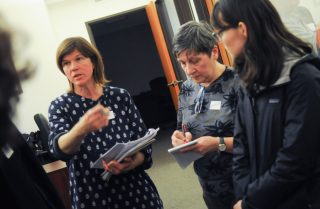 At the outset, noted activist and Portland Planning Commissioner Chris Smith urged us to make sure comments point out what the EA could do better and what it’s missing. If the feds see enough holes in the EA, or if they sense overwhelming consternation in the community, they could tell ODOT to do more homework and/or take the much more rigorous step of completing an Environmental Impact Statement (which, interestingly, has never been done for the I-5 freeway because its construction predates existence of the National Environmental Protection Act (NEPA) process).

And then there’s politics. Currently, Portland City Council has endorsed the project because they assume it’s their only chance to make major changes to surface streets in the Rose Quarter. ODOT has sweetened their deal by trading support for a coveted Mixed-Use Multimodal Area designation for the central city (PDF) that will allow the City of Portland increase development density without having to account for increased auto congestion.

But Portland’s support for this freeway widening was decided on with a different city council.

At last night’s event, Chris Smith was asked, “Could city council rescind their approval?” “Yes,” Smith replied, “That’s how Mt. Hood got stopped, the county rescinded their approval.” “Today we have one commissioner, [Jo Ann] Hardesy, outright opposed to this,” Smith continued. “And one who really wants to be, Eudaly, but doesn’t see the support to do anything yet. So we only have to turn one more vote to get something proactive out of city council.”

In another interesting exchange, economist, City Observatory founder, and No More Freeways PDX volunteer Joe Cortright was asked to compare the fight against this project with that of the Columbia River Crossing. Paul Jeffery said the CRC went down when activists worked with “strange bedfellows” in the Republican party of Washington state, who opposed the project on light rail and fiscal grounds. Jeffery worried that similar potential allies aren’t available this time around.

“I think that’s actually the good news. With the CRC we were always told that if we didn’t move forward with it we were giving up the contribution Washington would make. And we were giving up the money the FTA [Federal Transit Administration] would give for light rail. And giving up money we were getting from the federal government. We were told we had to ‘honor the deal with our partners’. But in this case, the project is entirely within the control of the State of Oregon. The legislature has total autonomy over this money, and if it decided it wanted to use this money for anything else, it could. We do not lose anything if we take this money and use it for something else.

If in the 1970s we were smart and savvy enough to go the federal government and figure out a way to change the Interstate Highway System so that we could take the money and use it for what we wanted to, then today we ought to be able to go to Salem and say, ‘If we want to spend a half billion dollars, this is not what we want to spend it on’.”

On that note, I learned from local engineer Gwen Shaw last night that the City of Portland’s entire list of 1,200 Safe Routes to Schools projects are estimated to cost about $250 million — the same amount ODOT wants to spend to widen I-5 through the Rose Quarter (project cost estimate is $500 million total, which ODOT says is split about 50/50 between freeway and surface street changes).

After a spirited opening discussion, we decided to break into groups to focus on specific elements of the EA. The groups were: biking/walking/rolling infrastructure, transit impacts, omissions and alternatives, and air quality.

Groups assembled and spent about a half-hour going through the EA, comparing notes and sharing ideas. We then came back together to hear reports from each group.

— A major focus is Harriet Tubman School, where ODOT’s plans will require putting a new freeway lane just yards from its property line. The group found a 2003 EPA study that put the school in the bottom 1 percent nationally for air quality. That’s before the freeway gets widened. EA comments will focus on asking ODOT to show more data for how the project will lower greenhouse gas emissions.

— There’s widespread skepticism in ODOT’s claim that their project will improve air quality (based on an assumption of free-flowing traffic from cleaner cars with higher mpg ratings in the future). Another focus of comments will be ODOT’s air quality measurement methods. The group said ODOT only took a reading for one day. They think more time is necessary.

— Cleaner Air Oregon and Eastside PDX Air Coalition should engage with this project.

— There’s a strong equity argument with the air quality concerns due to the well-documented fact that communities of color are most affected by diesel fumes.

— The lids. “Is the air quality going to be acceptable on those from day one? Are we building a plaza that can’t ever be somewhere you want to be because it’s dangerous to be there just by breathing?” The EA includes no analysis of air quality on the proposed lids that would be built over I-5.

– It’s difficult to talk about the results of the air quality findings without any information about how those results were derived.

— It seems like biking and walking infrastructure have simply “been inserted where it would fit” in order to still give drivers priority. “No consideration of making a quality experience for pedestrians or bicyclists.”

— It’s not clear how the Williams/Vancouver cycling movements will work. Big concerns about signal timing and how crossings might create delays and dangerous interactions.

– Broadway/Weidler doesn’t appear any safer for cycling and walking. “Intersections have large a radius, which is going to increase driving speeds. Slip lanes and increased turn lanes are dangerous for bicyclists.”

— Concerns that the project will not complete the 3,300 feet of sidewalk gaps in the area.

— Proposed Clackamas Bridge should be redesigned with a better connection to Broadway Bridge. Currently it goes too far out of direction.

— Removal of Flint bridge is a downgrade in cycling network. The Hancock/Dixon bridge won’t be as direct and will have a 9-10 percent grade.

— One whopper in the EA is the acknowledgement that transit times will be slower if the project gets built. Around 84 seconds slower according to ODOT’s analysis. ODOT blames this reduction in service on the new bike-only signals and protected bike lanes that will constrain road capacity.

— The EA doesn’t consider taking the funding and using it for transit improvements. Transit can meet or exceed the benefits of this freeway.

— We should decommission the freeway itself and turn that into the transit right-of-way.

— The EA never mentions the well-known phenomenon of induced demand.

— In Level-of-service analysis for surface streets, they don’t show their math for anything — especially for cycling will be impacted.

— In their modeling for the no-build alternative, they assume every project in the Regional Transportation Plan is built. Including the CRC (more on that later).

— The EA says ODOT explored transportation demand management (TDM) as a no-build alternative; but we have no information about what that consists of. TDM can be many things.

“Because tolling is, “reasonably foreseeable” (a NEPA term), the analysis needs to look at what the world looks like if we have tolls. But they didn’t do that, which his a a huge failing of the EA. Tolling should be an alternative in its own right. If you toll this stretch of road, you can solve nearly all the problems far cheaper and more effectively.”

— There’s nothing on how ODOT is going to deliver on promises they made to community impacted by the construction of I-5.

— The safety analysis is extremely lacking (“half-assed” was the term used).

— For more on missing data in the EA, see the recent letter No More Freeways sent to ODOT requesting more information (PDF).

I hope this summary is useful and that it helps inform your own comments. You can submit them here.

Don’t forget to stop by the ODOT open house tonight at Leftbank Annex (101 N Weidler). ODOT staff will be on hand to answer your questions and hear your concerns. The big public hearing is on March 12th at Oregon Convention Center. No More Freeways will host a rally beforehand.