This story is by Ashley Baker, a graduate student in Journalism at University of Oregon. This is her first contribution to BikePortland.

On a January morning in 2011, Carolyn Jen woke up terrified.


“I’m riding with these husbands and boyfriends and I’m wondering, where are their wives and girlfriends?”
— Carolyn Jen, Ride Like a Girl

For weeks, her husband had been trying to persuade her to participate in the Cycle Oregon Classic, a seven-day, 450-mile cycling tour through the state. Her initial thought? “You go right ahead,” she said, “I’m not going to suffer for a week.” Yet when the night of the registration party rolled around, she signed up. The next day she was afraid she wouldn’t be prepared when the event rolled around.

But with the promise of SAG (support and gear) wagons – vans that drive the course to assist riders – Carolyn found the support she needed to overcome her fear and get in the saddle. “Something changed,” Carolyn said, “where I fell in love – we both fell in love – with riding.” Not only did she cross the finish line, but Carolyn has completed four more Cycle Oregon Classics and now rides thousands of miles each year. 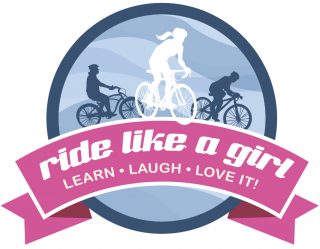 The more Carolyn rode, the more she noticed something troubling while on group rides. “I’m riding mostly on weekends,” she recalls, “and I’m riding with these husbands and boyfriends and I’m wondering, where are their wives and girlfriends?” She learned that many of the women who were missing on the weekend rides actually had bikes sitting in their garages. So why weren’t they on the road?

Nationwide, there’s a significant gender gap in cycling. Portland isn’t immune, despite its reputation as a haven for cyclists. Granted, Portland’s gender gap in cycling is smaller than in most of the country. According to the Portland Bureau of Transportation, about 35% of bicycle trips in Portland are taken by women compared to only 25% in the rest of the United States. Still, that leaves two men riding for every one woman.

“When I started hearing what the barriers were for women,” Carolyn told me, “I really saw it through the lens of an educator.” Her career at Intel as a training manager gave her the knowledge and perspective to act. “I felt compelled that everything I was hearing I could help women overcome with a supportive training process.” So when she retired in 2013 – after months of daydreaming – that’s just what she did. In April of that year, she began planning the first meeting for what would become her women’s cycling club, Ride Like a Girl.

“Part of my motivation,” she says, “was this screaming inside me that ‘you are missing out!'” So, she experimented with how to attract members. Carolyn organized a Summer outreach event called “Just Coffee.” Her event post on Meetup.com emphasized, “We are
not riding our bikes today! Consider this a coffee date with girlfriends where you can simply gather information.” At her very first “Just Coffee,” nearly forty women showed up. To Carolyn, this proved her hunch that there was a niche of wary-but-interested women cyclists out there. Getting them in the saddle would be another challenge.

Only half of the women who showed up for “Just Coffee” event went on to participate in the club’s beginner cycling rides. Performance anxiety (getting left behind), the fear of getting hurt (traffic), fear of mechanical failures (flat tires), and a lack of resources (time and money) are common anxieties that hold women back from riding. “It really revolves around safety, security and support,” said Carolyn, “and the fears of not having those things, combined with trying to learn something new in an insecure situation — that does not add up to fun.” She struggled to find a way to help other women see, as she had with Cycle Oregon SAG wagons, that they could be supported on rides and experience other benefits – better health, stronger relationships, confidence – all at the same time.

After two years of running Ride Like a Girl, Carolyn still felt she wasn’t reaching enough women. Even running a recreational club, Carolyn found it difficult to garner enough resources. “I hosted a beginner training series for the first two years on my own time, and then I registered as a business,” she explained. “I wanted to monetize it just because I’m giving so much time. But that seems to have thrown in yet another hurdle for women.”

For 2018, to celebrate the club’s fifth anniversary, Carolyn suspended the membership fee. “I think if I did it for nothing I’d have an even greater response,” she says, “But I have insurance now, and I have bookkeeping expenses.”

These hurdles faced by women cyclists, especially time constraints, start at an early age and don’t let up. Researchers at the University of California at Berkeley found that girls are 40% less likely to walk or bike to school than boys. And, according to a 2005 report from the Transportation Research Board of the National Academies of Science, American women take an average of 110 more trips per year than men (PDF) – a number tied to their disproportionate domestic activities such as grocery shopping and picking up children from school.

On a chilly November morning, five members of Ride Like a Girl set out for a 35-mile ride from Longbottom Coffee and Tea in Hillsboro. Women who’d grown close through cycling caught up on their kids’ college meltdowns, foods that are and aren’t allowed in their current diets, and how they’d find time to cycle over the holidays.

“I just went on a ride, and the guys were like ‘Oh look at those gears, they’re so cool.’ I couldn’t care at all.”
— Debra Rhea, Ladies Let’s Ride

The only rule was no, “gear talk,” which many women say they dread on co-ed rides. “With the guys it’s kind of heads down and let’s go,” Debra Rhea, founder of another women’s cycling club called Ladies Let’s Ride, told me, “I just went on a ride, and the guys were like ‘Oh look at those gears, they’re so cool.’ I couldn’t care at all.” Riders shared chocolate-covered espresso beans, and chatted while riding side-by-side along country roads.

Riding in the Tualatin valley – below the purple haze of the Coast range through fruit-heavy orchards – has that mystical Oregon quality. When I asked Brenna Wrye-Simpson, a Portland-based cyclocross racer, what riding a bike means to her, she said simply, “Thrill. Freedom. Community.” Those are the rewards of riding more women should be able to earn.

Only five miles before the end of the circuit, a tiny silver screw flew from Carolyn’s front wheel. All six riders pulled over and huddled in a half-moon cul-de-sac on the side of the road, their breath drifting through the cold air. Carolyn’s fender was falling off. Did anyone have a spare screw? A zip tie? Everyone sifted through their packs. Nope, nothing. Maybe, someone suggested, we should call a friend to pick us up. But then, one of the riders produced a pink hairband. Two women worked together, foreheads crinkled, to secure the loose fender to the frame and finished the ride.

Carolyn’s effort to create a supportive riding club for women has resulted in many wins, not the least of which is that Ride Like a Girl boasts 450 members and counting. Yet, her search for innovative ways to sustain and grow the group isn’t over. She still grapples, for instance, with how to leverage her limited resources to better diversify her membership — which is predominately white, retired or part-time-working women.

2019 is shaping up to be a big year for Ride Like a Girl as Carolyn makes a big marketing push and organizes another full slate of events and rides — including a special, 12-week coaching package to help women prepare for the annual Reach the Beach Ride.

SAG (support and gear). I did not know that. Thanks for this excellent article, I hope there will be more.