Family Biking: An introduction to Kidical Mass in Portland 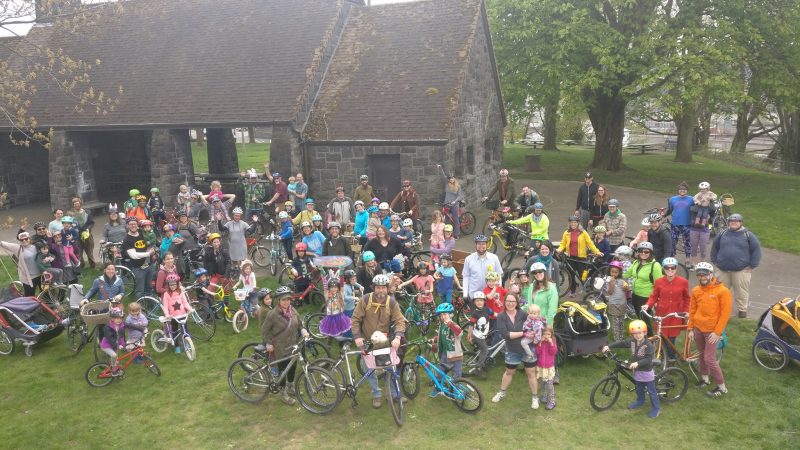 Kidical Mass is one of my favorite things ever: riding bikes with my kids, hanging out with a bunch of fun families, and demonstrating the joy of biking for transportation. The first ride of the year is coming April 1st (no foolin’), and I’d love to see you out there.

My first experience with Kidical Mass was nine years ago when I was new to Seattle and had up until that point only biked around my immediate neighborhood with just my toddler for company. I attended the inaugural Seattle Kidical Mass ride on May 15, 2009 — on my city bike with my two-year old in a front seat and my seven-month-pregnant belly wedged behind it — and was amazed to see so many other families biking with kids. I was intrigued by the many different types of family bikes and overjoyed at riding in a big pack. Each Kidical Mass ride was the highlight of my month and showed me new parts of town I wanted to revisit. I was motivated to figure out a bike route to the start of each ride and then experiencing these new areas with the big, safe group made me eager to return.


I think of Kidical Mass as a very slow-moving parade on bikes with lots of waving and bell dinging. Or, in the words of KidicalMass.org: “Kidical Mass is a legal, safe and FUN bike ride for kids, kids at heart, and their families.” You may notice the similarity of the name to Critical Mass, but the two events are not alike. Per KidicalMass.org: 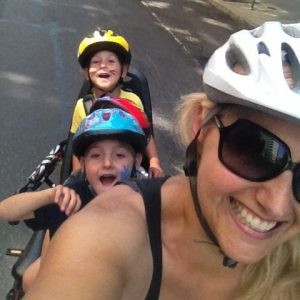 Note the red helmet of a sweet little kid I wedged between my own two during a Kidical Mass in 2013.

We are a family friendly law-abiding ride. Our purpose is to teach kids, parents and caregivers safety skills and provide a ride in which to practice them. We are creating awareness for the growing presence of kids and families on bikes and the need for all road users to respect other users of the road. We are also bringing together families who bike in an effort to provide a positive community experience that will show children how much fun riding your bike can be!

Kidical Mass is fun for families out for their very first ride as well as for seasoned everyday riders. Families interested in biking, but who haven’t figured out how to get started sometimes come to the start and/or end location of a Kidical Mass to connect with others and find inspiration.

After three years of being a fixture in the peloton, I volunteered to lead Seattle Kidical Mass rides. It was a blast! Sure, there were a couple wobbles, like the time all the children riding their own bikes thought I was joking when I said I needed to be at the front of the ride and zoomed ahead of me, yikes! We were on a neighborhood greenway so it worked out just fine and the kids felt such a sense of freedom and glee, though there was at least one very nervous parent behind me. And not to worry, I reworded my safety spiel after this to avoid any misunderstandings in the future. There was also the time my four-year old crashed his bike bad enough that he didn’t want to continue riding as we approached an intersection. Luckily the light was red and I was able to plop him and his bike on my cargo bike before the light turned green. I told myself it’s a boon for the ride leader to exemplify “things will go wrong and everything will still work out just fine” to help take the edge off any of my participants’ future similar woes. And please let my worst cases not take away from the close to 50 rides with no mishaps. 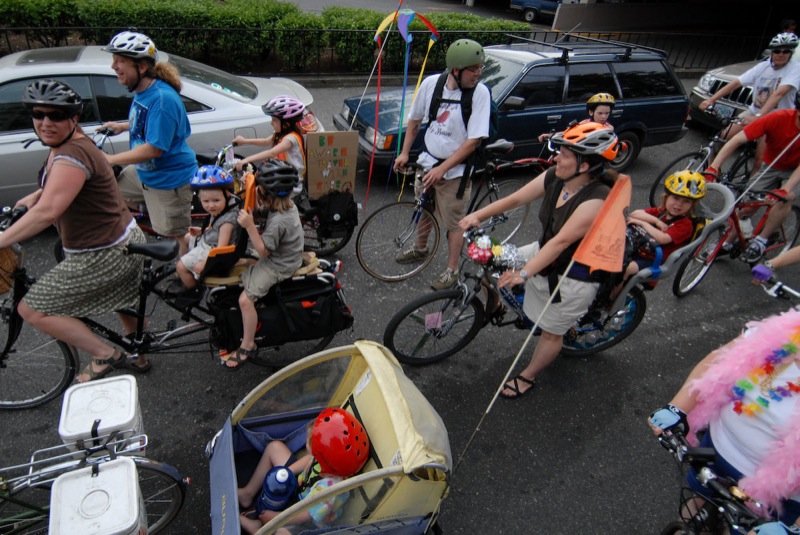 Before we moved to Portland, several of our visits coincided with Kidical Mass events, the first of which was in 2013 with an enormous group on the way to Fiets of Parenthood. I volunteered to be the caboose so I have a bunch of great photos of everyone’s rear ends. Being the caboose with a cargo bike also meant I got to scoop up a straggler and his little bike when he wanted a lift to the finish.

If Kidical Mass sounds like something you’d like to check out, you’re in luck because the first ride of the year is in less than two weeks, Sunday April 1st. Kidical Mass rides vary in size, but the annual Easter Ride is always a big one, expected to have 80 participants. Most Kidical Masses are comprised of only families with small kids, but this one in particular draws many who fall in the “kids at heart” category — everyone should feel welcome to join. Oh, also, I will be leading this ride! Just this one time to fill a vacancy. This will be one of my bigger groups, but I’ve already tapped a couple helpers and Kidical Mass PDX Director Sara Davidson has done all the real work of plotting the route (which I’ve pre-ridden, it’s great!) and promoting. 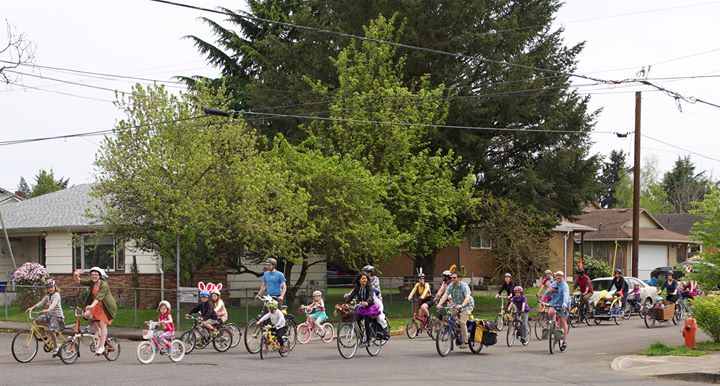 Here are all the details:

We’ll ride together as a group, because kids are traffic too! 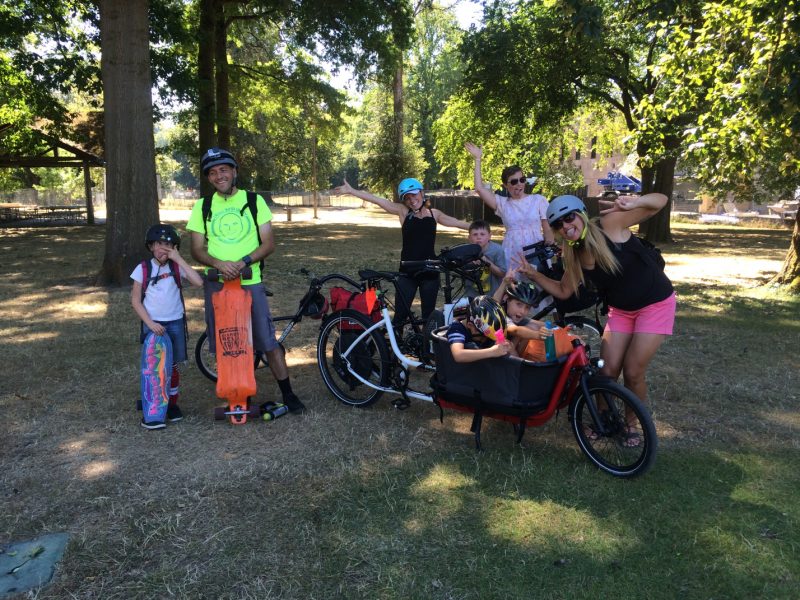 Kidical Mass PDX is always looking for new ride planners and leaders, no experience necessary! Email Sara Davidson at scowling [at] gmail [dot] com to volunteer or with any questions.

Thanks for reading. Feel free ask questions in the comments below or email me your story ideas and insights at madidotcom [at] gmail [dot] com.

Get this and other BikePortland posts delivered directly to your inbox.

We’re planning to be there! First time, so appreciate all the information, Madi. A small detail, and maybe this is on the Facebook page, but perhaps you can answer a question we had: at the hunt, are we talking real eggs or plastic eggs?

Oh good question! Plastic eggs with candy in them. (I think we might need to supplement the existing supply in which case I’ll add some stickers and/or temporary tattoos for non-candy eaters.)

what a great event! Taking inspiration from this story.

Vote Up0Vote Down
« ODOT will make improvements to I-205 path at Glisan, Maywood Park and Stark/Washington this summer
Eyewitness describes bicycle rider’s collision with MAX train »

How are you dealing with the new restrictions at Providence Park for Thorns/Timbers games? Only clear bags allowed, so what do you do with your bike-y gear? 3 posts - 2 participants Read full… Read Post »