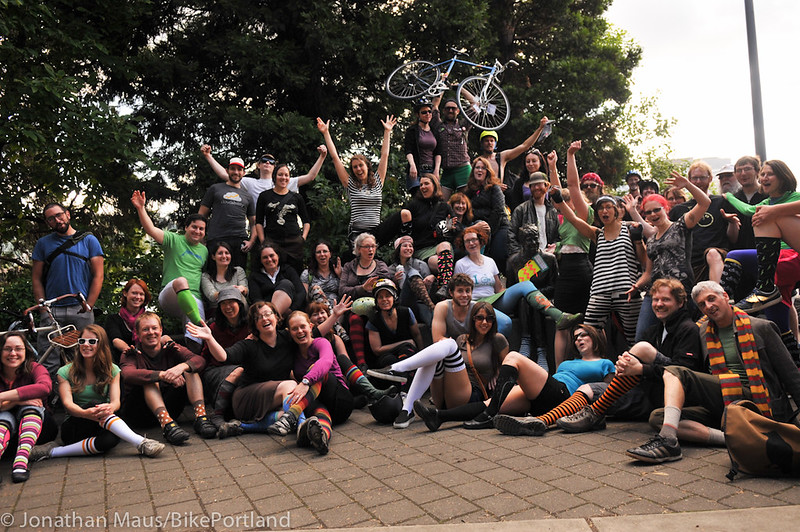 The Vera Katz statue (just right of center) is the centerpiece of this group photo from the 2012 Hott Sock Ride that took place during Pedalpalooza.
(Photo: Jonathan Maus/BikePortland)

As reported by The Willamette Week, she was Portland’s “last successful mayor.”

“Some naysayers scorned the idea that anyone would want to ride next to the freeway. Vera Katz didn’t even ride a bike and we know she didn’t drive. But she had transportation vision!”
— Sarah Bott, communications director for Vera Katz from 2001-2004

I moved to Portland in 2004 and didn’t get involved much in local politics until 2005, so I just missed her tenure. But I know based on what she left behind that she was a very consequential person. And I know exactly what the Willamette Week means based on the one-term mayors we’ve had since. (And she was also our last non-male mayor, so maybe there’s a lesson there?)

When I heard the news this morning, the first thing I thought of was the Esplanade; I mean the Vera Katz Eastbank Esplanade. From its floating path on the Willamette to its grandiose ramps up to Peace Park, the Esplanade still stands out in Portland because its uncompromising quality and vision puts bicycling and walking at the top of the pedestal. Katz wasn’t a transportation expert, but she knew right from wrong. As shared by Portland State University Library today, even as a political newbie in 1972 she new that better public transit and “an end to freeways built through our residential neighborhoods” were things were fighting for. And as our friend Michael Andersen shared today, as an Oregon State Representative in 1979 she knew when the legislature voted to earmark gas tax revenue solely for maintenance and expansion of highways it was, “A triumph of concrete over the needs of humanity.”

The Esplanade is an inspiring embodiment of her values. 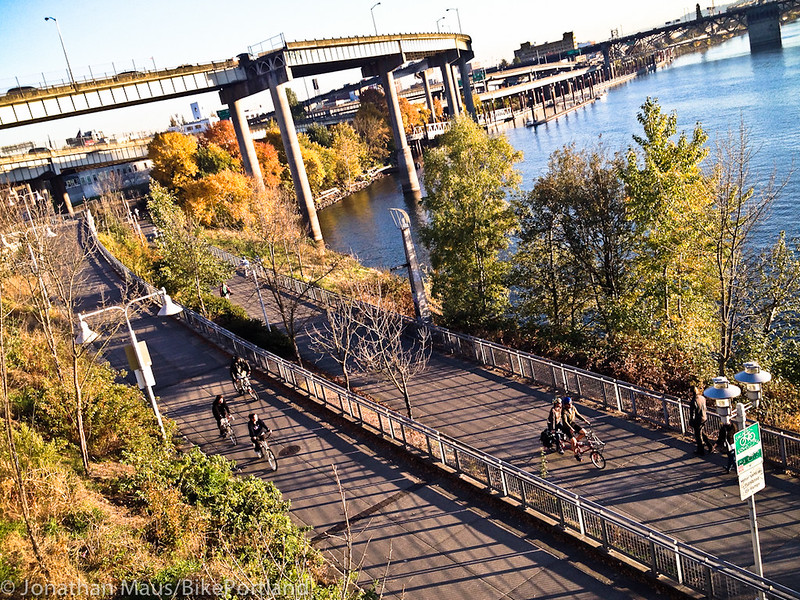 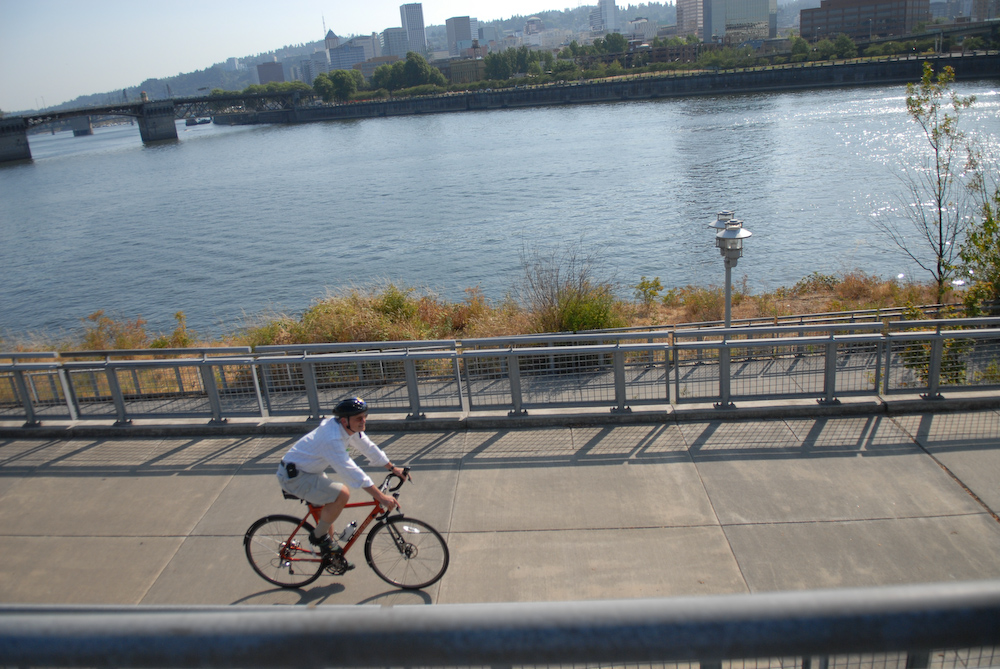 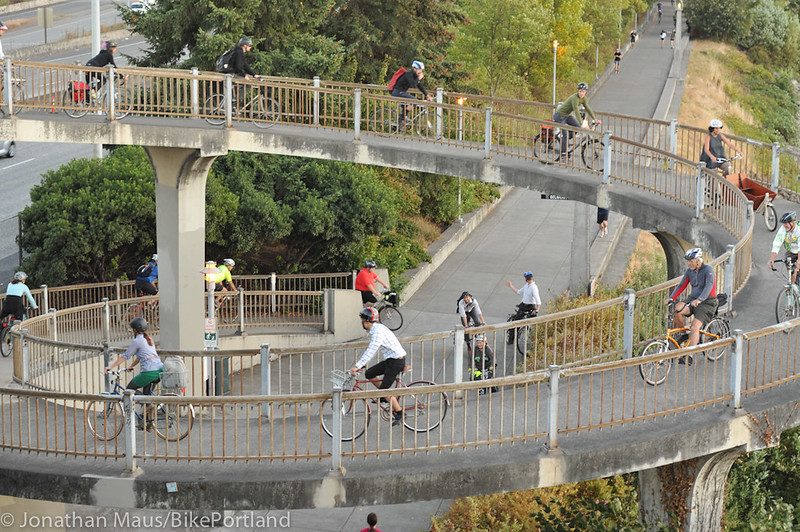 Vera’s Esplanade is arguably the most important bicycling connection in Portland. Its construction and completion happened under her watch. And since 2006 a lifelike statue of Vera Katz on the path near the Hawthorne Bridge has sat and watched thousands of people walk and bike by. That statue has been the meeting spot for countless bike rides and events. I looked through my archives for photos and asked readers to share theirs. Here’s what we’ve found so far… 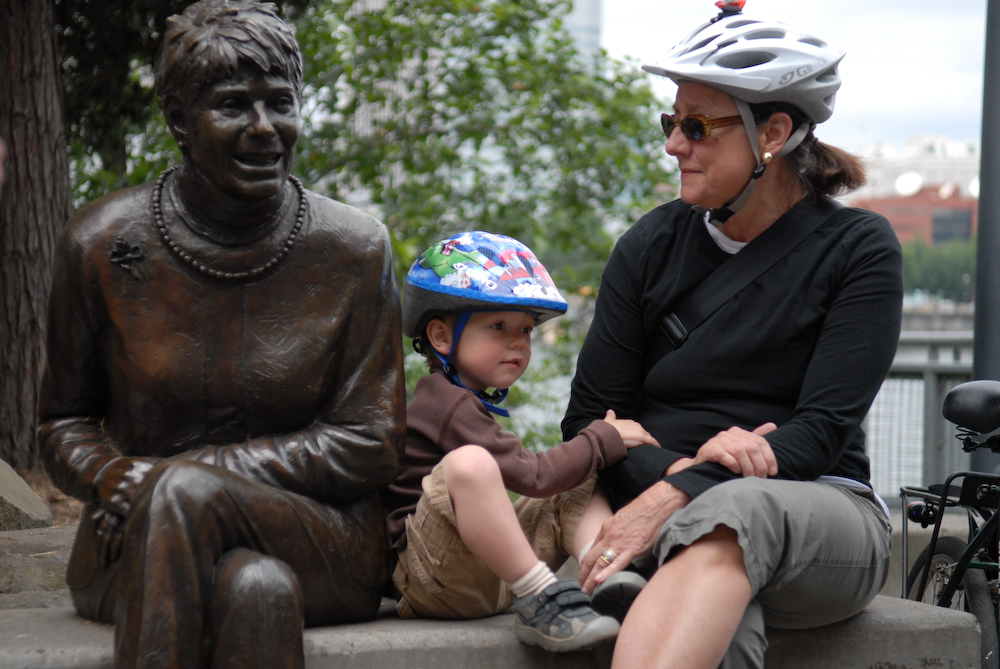 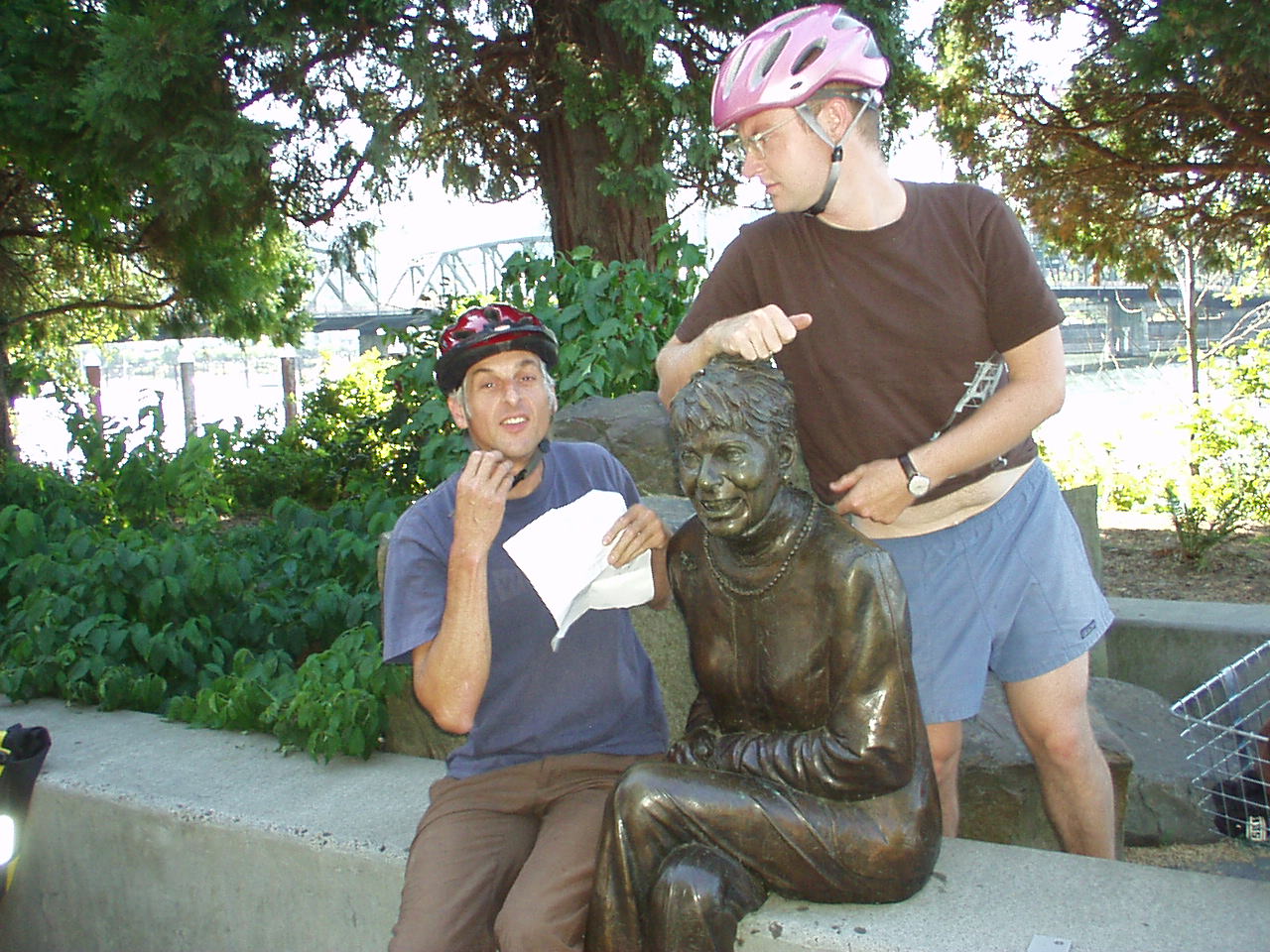 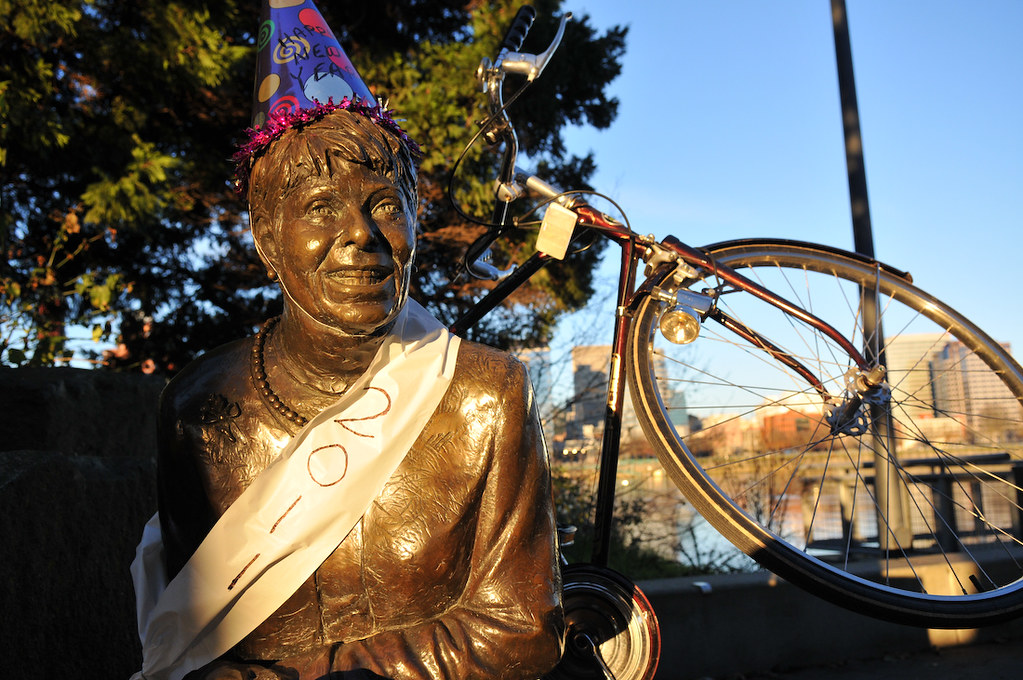 Taken on the last evening of 2010.
(Photo: Jonathan Maus/BikePortland) 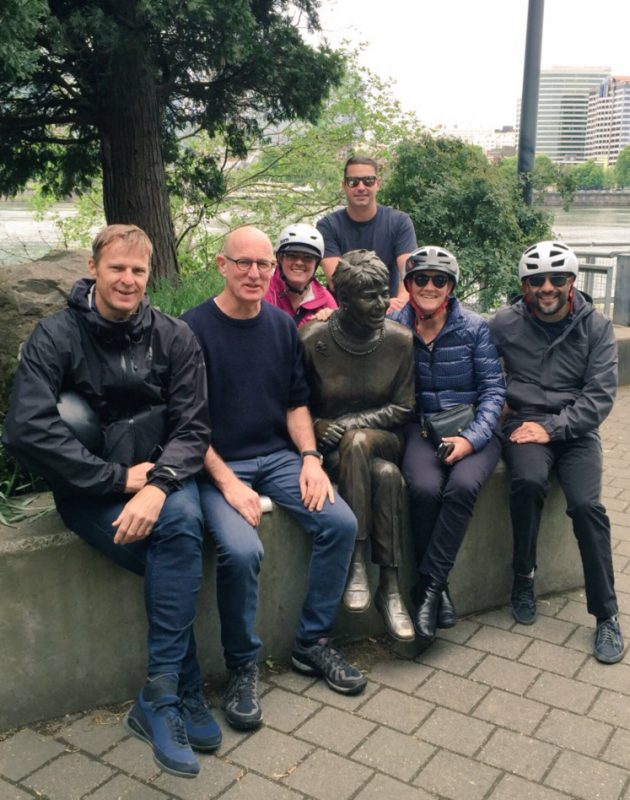 If you have a bike-related photo of the Vera Katz statue, please send it in and we’ll add it to this post.

In addition to the park bench at the Esplanade, she also has a park bench dedicated to her at the Walk of the Heroines on the Portland State University campus in downtown Portland. It’s worth noting that Vera is the last Portland mayor to serve more than one term. All the mayors who have followed since her departure from office in 2005 have served only one term or less. The Esplanade, of course, is officially named in Vera’s honor.

If only Ted could have half the work ethic and half the values of Vera.
Remember when Portland got things done!

Moving I-5 back is possible. Burying it isn’t, period. The I-5 ramp closest to the floating walkway is removed. The southbound exit ramp to downtown and eastside is relocated east out of the esplanade where it now presents a head injury hazard to bicyclists. About 30′ of distance is created for a buffering berm planted with shrubbery and trees south of Burnside. Ultimately, the Marquam Bridge will be replaced and the ramp closest to the river at the Hawthorne Bridge removed, the higher ramps further east remain. The 43 concrete piers supporting the I-5 ramps between the Hawthorne and OMSI leading to the Marquam Bridge. The replacement bridge reduces that number to 5 piers, 3 at the Hawthorne and 2 at the river’s edge. The replacement bridge will cast a shadow that hour by hour inches its way across a grassy bowl on the eastside to match the grassy bowl on the westside. Thanx BikePortland for the great tribute to Vera. She was great.

On issues of homelessness because of the city’s efforts to come to grips with that situaion, and the sit-lie ordinance that was tried out during one of her terms, a lot of people didn’t like Katz, and they said a lot of nasty things about her. I guess some of that though, inevitably goes with being in the political spotlight.

Overall though, Katz did well, as a mayor, and in the legislature. She wasn’t just a state rep, she also was speaker of the house for awhile, if I remember correctly. Smart, bold women are important, well needed role models.

The Esplanade was one of those projects that the city’s fiscal conservatives lambasted for being an outrageously wasteful use of taxpayer money. Turned out kind of well, actually, most likely far better than critics of the project ever imagined it could. As has the tram.

Who said we need more women in politics because men are having too many problems right now? I think is was Colbert, and he wasn’t being funny.

As a commemoration to this great visionary I suggest we officially place the end of the era commonly called ” Old Portland” at the end of Vera’s term in 2005. May we be able to bring back that kind of visionary thinking and action to our city in the near future.

I absolutely love the esplanade! Thank you Vera!

The esplanade was critical to my development as a lifetime bike commuter. Back in high school, I had a job in the Rose Quarter neighborhood, and lived in inner-SW. I was able to safely commute on the Willamette Greenway, cross at the Hawthorne, and take the esplanade up to the Rose Quarter. If not for the critical connection near the Steel Bridge, my options would have been much more dangerous, or significantly longer, and I probably would have just driven instead.

Vera chaired the committee that set the design for the Tillikum.

Also, she did not drive.

No, but she didn’t cycle or use transit, either; she had an cop chauffeur her all over town when she needed to go out.

As I understand it, she never had a driver’s license. (New Yorker and all that.) I doubt she spent the first 60 years of her life being chauffeured!

so rad I love stopping on the bike and hugging her.

As Mayor, Vera Katz wasn’t bad on bicycling issues. That’s not the first thing about Vera that comes to my mind, though. She lived a long and interesting life. I wish Kendra James, James Jahar Perez, José Mejía Poot could have had the same chance. But these unarmed people were shot and killed by the Portland Police when she was Mayor and Police Commissioner.

I’ll remember Vera as the Mayor who bent over backwards to avoid confronting the problems of police violence in Portland.

I’ll also remember Vera as the Mayor who hired Mark Croker as police chief to bring his LAPD methods to Portland. And I will remember being there on May Day 2000 when the Portland Police rioted in the streets, beating peaceful demonstrators, riding them down with horses and ATVs, and shooting them with potentially lethal, lead-shot bag rounds.

I’ll remember public meetings where packed houses of Portlanders reasoned, scolded, and begged her to make changes to hold killer cops accountable so as to prevent future deaths. But she … just … wouldn’t … listen.

Maybe if she had made those changes, a few months after she left office unarmed James Chasse wouldn’t have been beaten and kicked by a crowd of Portland cops who then stood by while he lay dying on the sidewalk.

She was okay on the bike issues, though. Gotta give her that.

Refusing to fire chief croakbringer gets a big hug from me too !

Hey, she hired him in the first place! Not one of her better moves…

Rest In Peace, Vera. Thanks for everything.

I remember the time when someone exited a taxi downtown, dooring a young woman as Vera was being driven to City Hall one morning. She got out of her car and helped the bloodied, stunned woman then told the transgressor that she’d “picked the wrong person to do this in front of”. (i.e. mayor of the city!) Cops we called of course. Don’t know end result but was great to see this woman’s compassion and her righteous anger at the carelessness of the taxi user. As you say, even if she wasn’t a cyclist she had the heart and vision of one – her fight wasn’t as mainstream or obviously right to most as it is nowadays. The epitome of the Portland spirit if there ever was one.

I know a TriMet operator from the 17 line who drove her many times.

After the final meeting of the TIllikum group Vera and I had a brief chat while waiting for the streetcar.

She was terrible when it came to police reform. But for everything else, she was a great lady. With her term ending, it was the last time Portland really embodied the “city that works”.

‘Terrible’ is a gross understatement, she was a Nixon Law-N-Order mayor. But what I forgive her least for is killing Bud Clark’s ‘Mayor’s Ball’.
🙁

Ah, what a lovely tribute. 🙂 Vera Katz was a good human with her heart in the right place. A true public servant. Thanks, Vera.

My fondest memory of Mayor Katz was during my time on the Governors’ I-5 Task Force. When we approached the final recommendation for the DEIS in 2002…a big 10 lane freeway expansion with lightrail was the leading option, I made a motion to include in the study of an option that retained the existing bridges and added to new arterial bridges or a “6-2-2” option.
Mayor Katz seconded my motion! and it lost on a 10-9 vote and was never considered, but she sure had my back that night!

Katz had guts, compassion, vision, smarts, and charm unlike any politician I have ever known. But I must agree that her selection of that LA cop for police chief was a great mistake…she was not perfect.

NY Times for Thursday 14 December has a big piece on Vera.