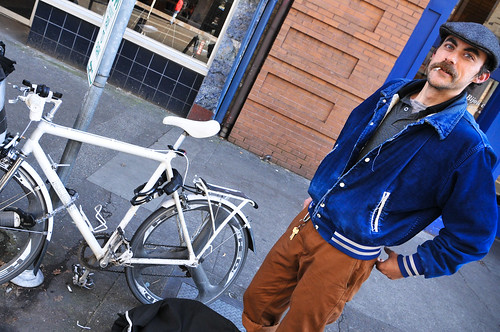 An outpouring of heartfelt remembrances and grief have followed the untimely death of Boyd Littell (he was known as “Gee” by his family). Now his family and friends have come together to raise money for a funeral and burial in his hometown of Norman, Oklahoma.

Littell is the 40-year-old musician and professional courier who died early Tuesday morning. Police found him in Colonel Summers Park lying next to his bike with a wound on his head. The cause of his crash remains unknown.

According to a story in the Norman Transcript, Boyd moved to Portland in 2014. His passion was music and the hip-hop band he played drums in, ADDverse Affects, was on a skyward trajectory. After “taking Norman by storm,” Boyd and band co-founder Josh Azzam came to Portland to seek new musical horizons.

In the past few days I’ve heard from Josh and other people who were close to Boyd.

Celebration of Life for Boyd

Josh was one of the last people to be with Boyd. They parted ways after hanging out together at Doug Fir Lounge after midnight on Monday. I asked Josh what he wanted the community to know about his friend. “It’s crucially important that people know how happy Boyd was in his last days. He almost seemed zen-like,” Josh said. Then he shared something he posted earlier to friends on Facebook.

“I also want everyone to know that Boyd was and has been incredibly happy out here. Yes it’s been tough but we didn’t move here because it was easy. We were seeking a new challenge to conquer and honestly we were fucking crushing it. Our last show on Saturday was a biggest yet in Portland. Never got a number but a few thousand people had rsvpd if that tells you anything. Benja and I were with him at the Doug Fir Monday night and all weekend for that matter, we drank beers, smoked cigarettes, laughed, and hugged. He was in top form. He was living his dream and he was truly happy. Just thought everyone should know that.”

A member of Boyd’s family emailed us a touching tribute. Here’s an excerpt:

“Let me leave you with this: Bob Littell, Gee’s dad, always had his eye out for a beautiful cloud formation in the sky, and on a good day, nothing could get better than the beauty he found in the clouds, and he passed that appreciation of beauty to Boyd, and every time Boyd stopped to talk, to update me on his life, his music, his challenges and his successes, when there was a beautiful cloud in the sky, you could feel that special connection Boyd had to his dad, and the beauty he found in his life. That he passed, probably looking skyward, possibly searching for his closest connections above, is only fitting, and comforting, in this horribly saddening moment of our loss. Remember Boyd when you look to the sky, and know his kind thoughts are with us, as we grieve his passing… we will miss you, we cherish you, we promise to embrace your ‘joie de vivre,’ exemplar that you could be. Thanks, kind, caring friend. We love you. Thanks for touching our lives.”

We also heard from a woman named Anna, who shared what it was like to spend time with Boyd:

“Boyd and i rode bikes and adventured around norman, OK, then portland, for about a year together, give or take ADDverse effects’ whirlwind move/tour from Norman to PDX. we biked to forest park, refueled with donuts and accidentally rode through oaks bottom on our super skinny-tired road bikes. i remember trying to pack his lunches so they had enough calories to fuel his crazy mileage. one night after a show, we stopped at clinton park and laid down our bikes, napped and stargazed for an hour, then finished the ride home. love to everyone who was lucky enough to know him. i wish so much that his ride hadn’t ended. rest in peace.”

Josh, Anna, and the scores of other fans and friends Boyd made here in Portland will gather at a memorial in Colonel Summers Park at SE 20th and Belmont this Sunday (11/5) at 6:30 pm. They’ll share words meant for Boyd and to console each other, then they’ll walk to one of his favorite haunts, The Nest on Belmont, to celebrate and remember the life he lived.

Boyd’s family has put up a fundraising site to raise money for a funeral back in Norman.