Headed to Canada to cover the Go Bike Montréal festival 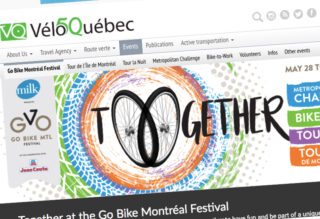 It feels strange heading to Montréal for a big bike festival on the first day of Portland’s big bike festival. But that’s exactly what I’m doing, thanks to an invite from advocacy group Vélo Québec.

From today through the weekend I’ll immerse myself in the street and bicycle culture of what has historically been considered one of North America’s most bike-friendly cities. Montreal built their first protected bike lane in the 1980s, making them a pioneer in prioritizing cycling. They also helped spark a global revolution by creating one of the earliest and most robust bike share systems from the ground up.

This summer Montréal celebrates its 375th birthday and Vélo Québec turns 50 years old. Those milestones will make the annual Go Bike Montréal festival — which is expected to attract over 50,000 people — even bigger this year. The event is a week of bike rides and events that aim to showcase the city and cycling.

While I’m in town my plans include: the Tour la Nuit, which looks a bit like nighttime version of Bridge Pedal; a bike tour of Montréal’s urban neighborhoods that promises “A real taste of authentic Montreal lifestyle”; and the Tour de l’Île, which looks like a combination of Sunday Parkways and the Portland Century.

And of course in-between these scheduled excursions I’ll have time for my favorite pastime — exploring the city as a camera-equipped, bicycle-mounted flâneur.

I’ll miss Portland and the kickoff of Pedalpalooza; but hopefully I’ll gain a new perspective on urban planning and culture in a city that shares our dual blessing and curse of having a (possibly outsized?) cycling reputation.

If you have insights into Montréal that I must know about, please feel free to share.

Quick programming note: I’ll still be working on the road, but with an all-day flight today coverage of the Oregon transportation bill that was just released last night and publication of the Weekend Event Guide won’t happen until tomorrow morning.

That’s “Maus-some” and glad to see that your work here is creating benefits outside of Portland for you.

can’t believe i have lived 42 years with this name and have never heard or thought of “Maus-some”… and I’m someone who says awesome a lot! (probably too much, if you ask some people).

We just visited Montreal, and I was impressed by the bike share system, and the decent number of separated 2-way facilities. They still have a lot of fast, wide, unsafe roads, and I also noticed that many cyclists were riding very far to the right (door zone) on quieter, shared streets.

If you have a chance, you should try to ride up to Mont Royal, and along the canal south of downtown.

I live ~2hrs away from Montreal. From a safety perspective, one of the more interesting aspects of Montreal was that you are prohibited from turning right on red. I believe it is the only city in the country with such a blanket prohibition.

It greatly enhances one’s safety if you happen to be cycling into an intersection via one of the bi-directional pathways.

A significant section of the Trans-Canada Trail (aka The Great Trail) runs thru Montreal, along with the numbered Route Vertė (Green Route) network that covers nearly all of Quebec, all signposted, according to my understanding. The transcontinental TCT will be declared completed next month, and they have plans for big celebrations on Canada Day (1st July). Some photos of those systems and their signage might be of interest.