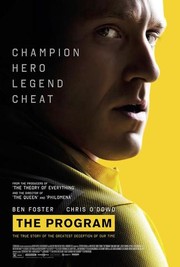 We don’t usually cover mainstream movies here on the site, but when an indie film comes to town that’s about journalism and biking, we have to give it a shout.

The Program is a fictionalized portrait of an Irish reporter’s battle to uncover Lance Armstrong’s history of doping his way into yellow jerseys. It’s at the Living Room Theaters this week.

The world needs heroes and Lance Armstrong (Ben Foster) was the ultimate sporting hero. Following a gruelling battle with cancer, Lance returned to his cycling career in 1999 more determined than ever and with his sights set firmly on winning the Tour de France. With the help of the infamous Italian physician Michele Ferrari and team director Johan Bruyneel, he developed the most sophisticated doping program in the history of the sport. This program allowed Lance and his American teammates to dominate the world of cycling, winning the Tour an unprecedented seven times. However not everyone believed the fairytale. Sunday Times journalist, David Walsh (Chris O’Dowd), at first charmed by Lance’s charisma and talent, soon began to question whether the ‘world’s greatest athlete’ was ‘clean.’ Walsh sought to unveil the truth, his ensuing battle with Armstrong risked his own career, ostracised him from the cycling community and cost his paper, The Sunday Times, hundreds of thousands in legal costs. But the indefatigable Walsh eventually uncovered the truth when a select few prepared to talk came forward, exposing one of the greatest deceptions of our time.

Rotten Tomatoes says the reviews have been ho-hum. Still, we thought you might want to know.

I hinted at the movie in my video roundup from last week- if you want to see it, I doubt it’ll play at LRT for very long. As a pro racing fan and having done obsessive reading and research on the doping era, it was.. okay at best. The fact Lance Armstrong hated it was good endorsement for the movie, but it was mediocre at best. The Ferrari role was overacted and David Walsh’s character was poorly written.

Still, if you want more, or if you haven’t paid attention to pro racing since the Lance/Floyd Landis era, the truth has come out and there’s some honesty about what was really going on then.

It all pales to the scene in “Pantani: Accidental Cyclist” about how riders had an low HR alarm and had to get up in the night to exercise.. or they’d die.

I also follow pro cycling and have seen this movie. I really liked the racing scenes (albeit few of course), but everything was pretty flat.

Would be better as a mini-series, especially for the early days which I find fascinating before going full on the program.

From some interview, published somewhere, a very brief quote from Armstrong I remember as to why he took illegal performance enhancing substances was (and I may not be remembering his exact words) ‘ to level the playing field.’.

Earlier in the interview if I remember correctly, he’d been asked, and had answered about his having had, been treated and went through the ordeal of recovering from the big C…so I took that to mean that he rationalized the doping to enable someone like him, that had an extraordinary athletic drive and ability, to successfully compete against other athletes that hadn’t been beset by that or some similar adversity. There goes resignation to the old adage ‘them’s the breaks’.

His rationalizing performance enhancing drugs to compensate for his own misfortune…and despite whatever justification it might be argued he had for doing it, I’d say he was wrong to have done so…doesn’t justify the nasty pressure he’s said to have applied to other people in cycling to use dope.

Armstrong is a flawed hero, but particularly for his fight against cancer and for his efforts to encourage other people to do so as well, I think he’s still a hero, something which I hope people will not forget. Had he not had the personality traits that manifested themselves in the extraordinary drive he had to push his limits physically, psychologically and spiritually, would the disease he had, or has, have gone away or, as may be the case, been only pushed into remission?

Don’t know about everyone else, but I have to wonder. And having known people that had the disease and been sick from or passed away from it, I can’t dismiss the possibility easily. They need all the inspiration they can get. Armstrong has a lot of things he needs to work on to become a better person. If he tries, he’s still got time to do that.

He’s not the first self serving prima donna athlete, artist, journalist, what have you, and he’s not likely to be the last. I’m concerned the resulting popular scapegoating of him that’s been going on for so long, will overwhelm the positive efforts Armstrong has made. That could be a greater loss to many people than he personally having been found to have cheated at pro cycling.

Actually he is a true sociopath, but it was fun to watch for awhile….

Yes he does appear to be a sociopath, but he’s our sociopath. By that I mean that he is probably responsible for more people riding bikes in the US than any other modern person.

I, for one, was glad to have some company when the many folks whom he inspired ventured out. The Lance effect seems pretty undeniable.

I actually lived in Plano and Austin. Not just a visit. The entire LA mythology was a fabrication from the beginning. Was poor mom really a struggling single parent? The man apparently set the stage for his own cancer. All of this has been uncovered, admitted and left to dry in the sun. The whole trip was a steaming pile of Bill Stapleton fueled by amgen and a financial Weisel. If you havent figured this out by now, please try harder. Yes, he did in my mind “win” (crossing the finish line in less time than the rest of the druggs)
those seven tours and is sick fast on a bike but otherwise I’m tired of Lance apologists.

That Tailwind/Bruyneel organization institutionalized systematic level corruption right up through the sports governing body. Lance and team took it to a whole new level. Right up to using Oprah as his boo hoo rag. . . .

There’s already a movie called “The Program” with a doper in it. He smashes car windows with his head when he makes starting defense.

I’m interested in the others that doped as much as he did, but only got a 6 month ban. Lay low and let Lance take the heat, I guess. Can I get Armstrong apparel to go with my Hincapie stuff?

Generally speaking, they admitted it much earlier and provided evidence. Lance didn’t admit it until it was really obvious and still persisted. Additionally there’s testimony that he strongarmed teammates to dope.

The difference between LA and the others,is they were for the most part free lancers. Armstrong was basically the organized crime of doping, a systematic program, of which he could lie right to everyones face about…

The others rolled over on him….snitches, cowards.

Lance Armstrong is as much of a cycling hero as Marco Pantani.

I’m an avid professional bike racing fan and have followed this movie’s plotline for many years. I think the movie was so-so. Mostly I was disappointed with the overall look of the movie. It looks like a lot of amateurish green screen use. I can’t believe Stephen Frears created such a visually crappy movie.