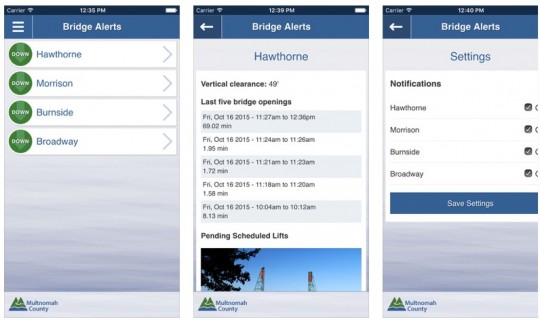 Multnomah County has just released a smartphone app that will tell you when and if one of their four downtown drawbridges is in action. Yes, for the first-time ever your phone can tell you how to avoid those dreaded delays that always seem to happen at the most inconvenient times.

Here’s more from the County:


The Bridge Alerts app is the first publicly available mobile application developed by the county’s Information Technology team. It provides notifications when one of the county’s four drawbridges opens for a river vessel, maintenance or repairs. The four movable bridges are the Broadway, Burnside, Hawthorne and Morrison. (The Steel Bridge, which is owned by Union Pacific Railroad, and the Interstate Bridge, which is owned by ODOT and WSDOT, are not included in the app.) The app includes notifications for scheduled bridge lifts when a bridge opening is scheduled in advance.

And they even made a video about it!


The app is small and very straightforward. It downloaded on my iPhone in a few seconds. When I opened it up the first screen shows all four bridges. An arrow in either green (for down) or red (for up) told me the immediate status of the bridge (the Broadway has been up for 14 minutes as I write this apparently). Click on one of the bridges and the next screen shows you the times, dates and durations of of the last five bridge lifts. For you bridge nerds (I know you’re out there!), there’s also a handy link to more information on each bridge. 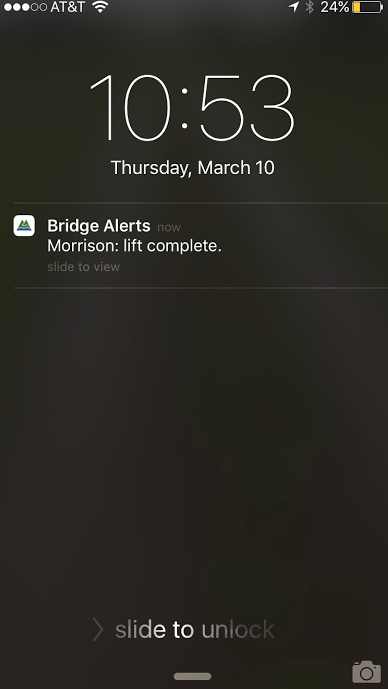 My favorite feature are the alerts that are pushed to your phone when a bridge goes up and then when it goes back down again.

The app is free and available for Android or iOS operating systems.

I’ll be the first to ask… what would it take to include all the bridges? If the railroad, ODOT and WSDOT had public info could it all be put together? Is the couny data not public in a similar way that Tri-Met has made theirs?

As the bridge closest to the water and therefore the lowest clearance, the Steel Bridge path is the most susceptible to bridge lifts (not to mention random closures because of malfunctioning cameras or gates) and its absence here is a major omission. I realize that the Sovereign Nation of Union Pacific controls the bridge, but it would really improve the utility of the app to include this.

Steel Bridge can also independently lift either of its two spans. The bottom span being lifted far more often, obviously.

I would still like to know if the County’s API data public, but here is an answer to my Q.:
“Mike Pullen, a spokesman for the county, said they started with just the spans the county owns.
“If there is interest, we can check with the owners of the other drawbridges and see if it is possible to add them to our app,” he said.
http://www.oregonlive.com/commuting/index.ssf/2016/03/new_multnomah_county_app_offer.html

I have always wanted to do the Interstate Bridge as a lift-aware app.

i just downloaded the app. not sure if it will be cool but i am so so so so stoked about the idea of this. i want the water bureau to make an app- they have one of the coolest blogs. …. rad.

Would be pretty great if this app could notify of upcoming bridge lifts. Being too greedy?

Anyone know what happened to this app? I’m not finding it in the Android store.

2nded. Wouldn’t have helped when Morrison was stuck almost closed.. but the app is gone