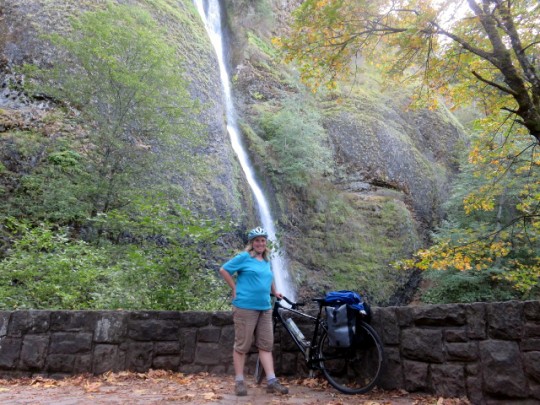 It takes years of advocacy and patience to create an out-of-town bike route like the one gradually being extended along the Historic Columbia River Highway. But once it’s built, the benefits are too big to measure.

Linda Hill, an Oregon biking lover, decided to celebrate her 61st birthday with a four-day trek last month that took that route through the Columbia River Gorge, which was vastly improved in 2013 by opening of a section of the highway to bikes and removing the need to bike along the shoulder of Interstate 84.

One of the staffers involved in that process, Active Transportation Liaison Jessica Horning of the Oregon Department of Transportation, came across Hill’s account of the trip and shared it with us. With Hill’s permission, we’re resharing it here. Take it away, Linda: 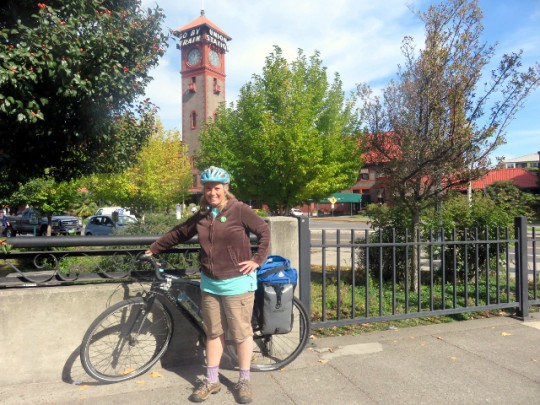 I spent 4 wonderful days in early October 2015 cycling a hundred miles from Portland to The Dalles along the Historic Columbia River Highway. This was my dream ride to celebrate my 61st birthday and I savored every moment. 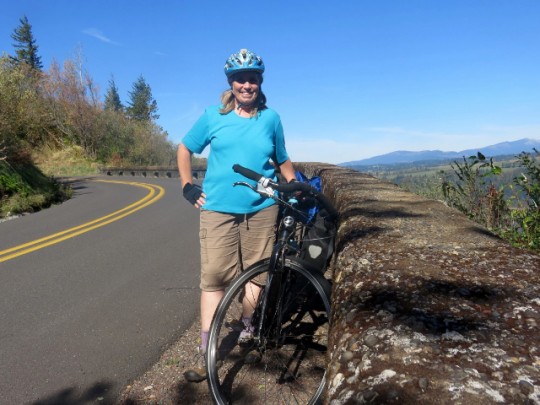 The location of the small towns along the route let me slow down to a very enjoyable rhythm of 20 to 35 miles per day. This pace gave me time to stop whenever I wanted to chat with people and enjoy the views, waterfalls, tunnels, plateaus, and a few of the many trails along this stunningly beautiful bikeway. 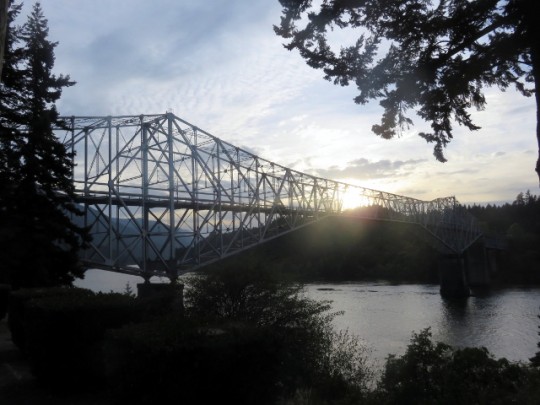 The Bridge of the Gods. 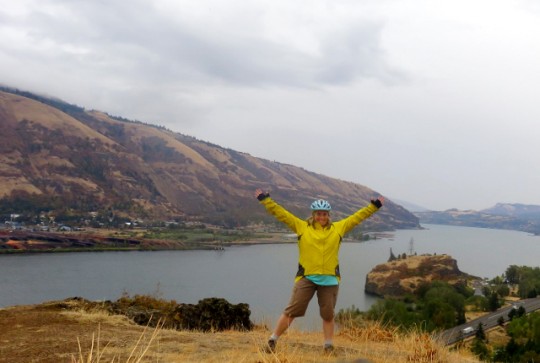 At the west Mark Hatfield Trailhead. 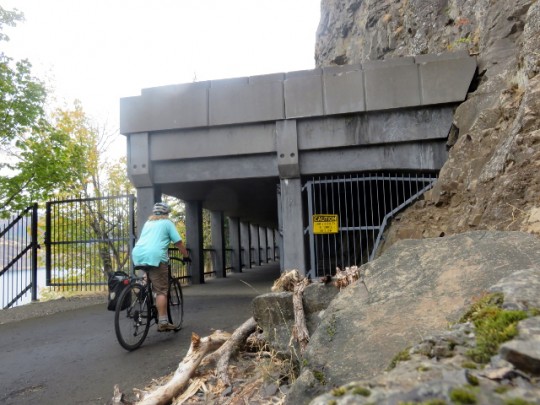 Through the Mosier Tunnels.

Even though there are plenty of campsites along this route, I decided to stay in a few of the many motels in Troutdale, Cascade Locks, and Hood River. This decision meant that I didn’t have to carry much gear and I had a comfortable bed to sleep in each night.

By traveling weekdays instead of on the weekend, the traffic was very light on the portions of the historic highway that are shared with cars. The ride from Troutdale to Cascade Locks is probably the most beautiful day of cycling I have ever had.

The decision I felt best about, though, was to make use of the Columbia Area Transit (CAT) Dial-A-Ride Service to get around the yet-to-be re-connected 10 mile stretch from Wyeth to Hood River. After watching the ODOT videos about the plans for the final 10 miles of trail, I had no interest in attempting to share any part of the I-84 Freeway with huge trucks hurtling along at 80 miles per hour. I was especially worried about the narrow section around Shellrock Mountain that is described by Park Rangers as ‘frightening’ and ‘harrowing.’ 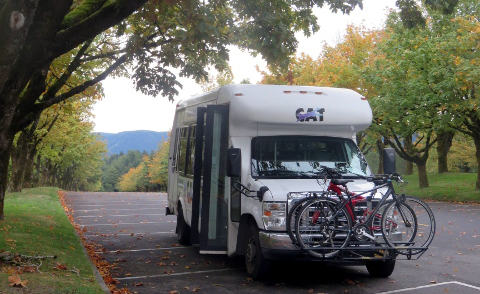 What a relief to find out about CAT and their bicycle friendly busses. I simply called 541-386-4202 a couple of days ahead and booked an early morning ride from Cascade Locks to Hood River. Then after being shuttled around the scary part, I hopped on my bicycle and spent a wonderful day riding up the easy 5 percent grade to the West Mark O Hatfield Trailhead and then on to the famous Mosier Tunnels, the town of Mosier where bike racks are works of art. I climbed up and up some more to Rowena Crest and then rode the swooping loops down toward The Dalles.

At the end of my trip, I caught the scheduled CAT bus service from The Dalles back to overnight in Hood River and then the net morning I caught the bus back to Portland.

Learn more about the Historic Columbia River Highway project in our archives.

Awesome – hope you caught some tailwinds! Smart move to catch CAT for the Cascade Locks stretch over to Wasco Street – it’s a hidden gem that I really wish ran more often. Happy birthday!

Great account, and a splendid way to celebrate. The coast highway gets all the hype, but the gorge is fantastic and imo a better ride.

Michael, this in its context: “by opening of a section of the highway to bikes and removing the need to bike along the shoulder of Interstate 84” could be construed to mean that you can ride all the way to Hood River without using I-84. Would that it were so. As Linda’s account makes clear, there still are some freeway miles – most are not too bad (really wide shoulder eastbound) but as she says, the Shellrock Mt. portion is kind of tight….

useful map on the city’s website here, if you’re thinking of making the jaunt:
http://www.portlandoregon.gov/transportation/index.cfm?c=36638&a=322030

Good info and resource! I should add the CAT link. This leaves from the Gateway MAX, which I sometimes use to/from PDX:
http://www.gorgetranslink.com/regional-thedalles-hoodriver-portland.html

Once in Hood River, you could also ride loops south into the valley, or climb to Lost Lake for the more ambitious. Temira’s site has some good local info (and weather): http://thegorgeismygym.com

This is great! I want to try to do this ride sometime soon. Thanks for the inspiration!

What an awesome ride! Great use of CAT to get around Shellrock Mt. The fun factor of riding on that narrow shoulder around that Mt. was very low that last time I was riding through there.

If there were in fact “huge trucks hurtling along at 80 MPH” I’d be concerned sharing the highway in a car!