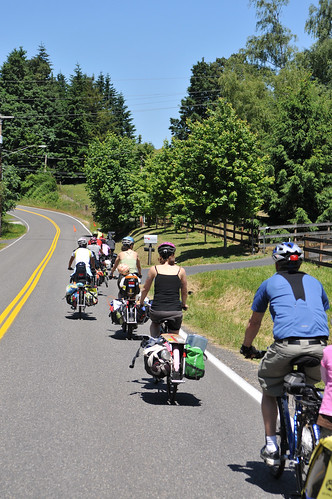 Welcome to one of the first in our series of occasional “Advocate” posts. These are quick, simple opportunities to get involved in making the Portland area better for biking.

Multnomah County is updating its wide-reaching long-range plans in ways that matter deeply to residents of the relatively few urban streets owned by the county government.

The result is that people who live on those streets — notably for bike users, Northwest Skyline Boulevard and Corbett in the western Colombia Gorge — have weighed in about the importance of bike transportation to the county, but most residents of the county haven’t.

“It appears that the only active outreach has occurred at two open houses held along Skyline and in Corbett,” Multnomah County Bicycle and Pedestrian Citizen Advisory Committee member Andrew Holtz wrote in an email to BikePortland. “Not surprisingly, the attendees at these meetings put bicycling, walking and other active transportation projects at the bottom of their priority lists.”

“The survey is open only until 5 p.m. Wednesday, Sept. 30, so there are just a few days to make your priorities known,” Holtz wrote. “Unfortunately, the key transportation questions are buried deep into the survey, so people have answer several pages of land use, agritourism and other questions before getting to the bike and ped stuff.”

If you’d like to weigh in, go for it.

just did it. Fight through to the end. the first 75% is non-transpo related

Washington County Visitors Association just sent out a survey, to try and analyze how visitor-friendly the County is. Unfortunately, it’s WAY too long. Would have taken me an hour to fill it out

Do you have a link to this? I don’t recall seeing anything about it…

It only took a few minutes.

These Advocate posts are a great idea. Thanks for including them.

Want to improve cycling safety on rural MultCo roads, cost effectively?
1. Make sure the pavement is maintained.
2. Promote cycling in these areas (there is safety in numbers)
a) Add creative “Bike Route” signs
b) County-sponsored events and/or car-free events that may get people “hooked” on a particular road or route
3. Add safety signs where appropriate, example: Bikes May Use Full Lane or Speed Readerboards “Your Speed Is…”
4. Think outside the box – speed humps that bikes can ride between

Filled out the survey. It seemed well-intentioned and it looked like they were putting some thought into the transportation section, but it was still frustrating to have to parse automobile-normative language.

Done. And I let them know about continuing to use “sensitive” habitat designations as a tool to ban mtb usage as well.