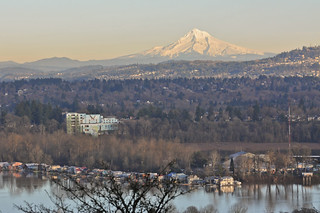 Come on down.
(Photo J.Maus/BikePortland)

The annual Hood to Coast running relay is understandably celebrated as a signature Northwest event. But if you’ve ever participated, you know that it involves a lot of motor vehicles.

Two weeks from today, a squad of Portlanders is inviting a few people to join a trial run of an interesting experiment: a Hood-to-Coast style running relay that relies on bikes, not vans, for support. Here’s the description of the “Peak to Rising Tide” relay from organizer Jamey Harris:

We’re a group of friends and friends of friends who are excited to do a running relay race with bikes instead of vans. We’re not sure if this has been done before (though we haven’t done a lot of research on that point).

Some of us have participated before in relay races that use vans for transportation between running legs. We really appreciated the challenge and beauty of the courses and the camaraderie of the teams, but we wondered whether there was a way to conduct a relay race without all the traffic, pollution, risk of injury from the motorized vehicles, etc. Running is so simple and special, in part because it does not require fancy equipment or motorized vehicles, so it seemed a shame to stage a race with such a large impact. We all love biking, so we put two and two together and decided to stage a relay event of our own!

Some team members are passionate about peak oil and climate change, a friend suggested the name, and it stuck.

But all of that is just an explanation of the event’s origin. We decided at the very first happy hour that our only goal is to put together a fun, positive, human-powered event. It’s been great working through all the logistics. We’ve had a series of happy hours to meet each other and decide on details. We’ll be using a bike trailer to haul the current runner’s bike from the start of his or her leg to the end of the leg. And everyone has committed to biking to and from the start and end points of their teams’ sections. So, in the end, even though we’ll be running from Timberline Lodge to the coast, we’ll be doing a lot more biking than running.

We still have a few slots open on the team and (perhaps too ambitiously at this point) we are open to a group putting together a second team to run the same course.

What a cool idea. Here are some more details from another organizer, Nadia Dahab.

On Friday, August 21, and Saturday, August 22, we will bike and run from Mt. Hood to Seaside. The twelve-person relay team includes three subteams, each traversing 1/3 of the relay course (Mt. Hood to Portland (A), Portland to Vernonia (B), Vernonia to Seaside(C)). Each subteam member will bike to the start of their course section, run three +/- 5-mile legs along that section, and bike the distance between each leg. Distance traveled will total about 130 miles (more for subteam C members).

Do they have to bike back to Portland as well?

We sure do! We’re biking to Hood, biking from Hood to Seaside, and then biking from Seaside back to Portland.

I think they get to bike back to Portland. Biking’s not a punishment, you know. 🙂

after running 18+ miles on poor sleep? I have to disagree.

Such a strange and sweet convergence. There’s another group doing the same damn thing at the same time, lead by Josh Volk. We’ve had commitment attrition so our “H2C Motor-free” has become “Hood to Portland”. Maybe we should join forces…

Hi, Mike! We’d love to talk about joining forces! Shoot me an e-mail (dahab.nadia@gmail.com) and we can talk more about getting together. We’ve got a happy hour coming up next week that you and your crew should attend.

This is good to see. It always disheartens me to see running events that involve mostly driving. Maybe we can even get some (more) runners to buy into the notion that they don’t have to drive somewhere to do training runs.

Of course the cycling house could use some cleaning up in this regard as well. It would be nice to see the directions to recreational cycling events NOT give freeway directions and parking lot locations but rather give appropriate routes to ride to the ride.

I’m not a runner, but this sounds really awesome!

Our team came in 3rd place at the finish line for the 95 Portland to coast but we were laster told that we did indeed take first because the other two teams had been caught getting back into their vehicles.
Aside from the cheating side of things I can say that the cars kick up a lot of dust when on the gravel parts of the route and its super hard to see as a result.

I love the idea but fear it would exclude / discourage some from running.

I’d be into this!

Hey Matt! Send me a note (dahab.nadia@gmail.com) and we can get you looped in! We’re having a get-together next week; if you’re available, it’d be a great chance to meet the team and learn more details!

You guys are awesome. Best of luck and please keep us all posted on how it goes – this is a great idea. Not sure I’m up for joining this time, but I am very interested in training for it with more advance notice etc.

Will do, thanks, Ryan! We’d love to have you next time around!

Nice idea but I’d never do it. H2C is a massive massive CF of vans, lots of night driving, the need to sleep out, you’re on the road (on foot) or in Van or sleeping on the ground for 20-30 hours.

I can’t even imagine trying to ride on 30 through Scappoose at 3 am.

Good luck but I ain’t that fit.

Hey Paul! I totally get it—it’ll be a ton of running and biking! But here’s the great thing: we’ve mapped our own course that’s much more bike-friendly than the Hood to Coast route. (For instance, we don’t even come near 30 through Scappoose!) What’s more, our teams are set up in a way that eliminates the craziness of having to get a good night’s sleep between running legs. Maybe we can convince you to join us next time around. 🙂

I could probably be convinced to do it. Fortunately out of town ha ha! Find me next year I’m a pretty speedy runner.

Sounds good. I have usually escorted the runners from Portland to St. Helens on my bike wearing a set of pink tights and jersey on my yellow bike. I ride on the right side to middle of the right lane to wave the trucks over to the middle lane, especially where the fog line is narrow (bike path as far as ODOT is concerned at less than 18 inches in places close to St. Johns bridge. About 10 minutes after I hit the road the truckers hear all about it to Mt. Hood. they want to give the guy in PINK! a lot of room. they get the idea and give all of the runners more room.

I so hope you have enough momentum from this year to keep it going next year! If it’s on next year, I’m totally in.

Thanks, Jennifer! We hope so, too — and look forward to you joining us next year!

This is a great idea. Too bad all the damn traffic also makes it a dangerous idea.

Thanks, Mike — we’ll report back on how it works, but we think we’ve found a pretty bike-friendly route. For safety reasons, we agree that the standard HTC route could be pretty dangerous for night riding.

In the past, there were traffic jams on rural and forested roads, some in the middle of night. As a result, some runners arrived late to start their leg, leaving the runner of the previous leg waiting. There are long stretches where they are no street lights. Someone left horse manure on one unlit part of the course, and it required all of your attention to avoid the clumps. This will be an arduous exercise for team members, and they will not be able sleep in the van. I hope this team fares well.

Color me impressed! I’ve participated in three H2Cs, and finally threw in the towel after the massive traffic head ache that marred the 2013 edition.

We did the same thing! We’ll report back on how this works out! Perhaps you’ll consider joining us next year! 🙂

Why run at all? Just have the team all bike there and back together. Much more fun.

The 3rd team arrived at Seaside yesterday afternoon and all three managed to stay ahead of the smoke from what I gather.