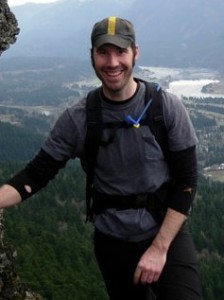 According to the Multnomah County Sheriff’s Office, Crenshaw was riding downhill with a group of friends when he “crashed on a curve” and veered into the opposing lane of travel. Someone driving a car in the opposite direction collided with Crenshaw. Friends attempted to revive him, as did emergency responders, but he was pronounced dead on the scene. The driver of the car remained at the scene.

The collision happened on East Haines Road near the intersection with E Larch Mountain Road. This is a very popular place to ride as Haines connects to Alex Barr and the Historic Columbia River Highway. I’ve ridden this exact same stretch of road myself many times (it’s featured on one of my RideWithGPS Ambassador Routes). It’s very quiet and rarely has traffic; but the curves are sharp and the road is very narrow in some spots. 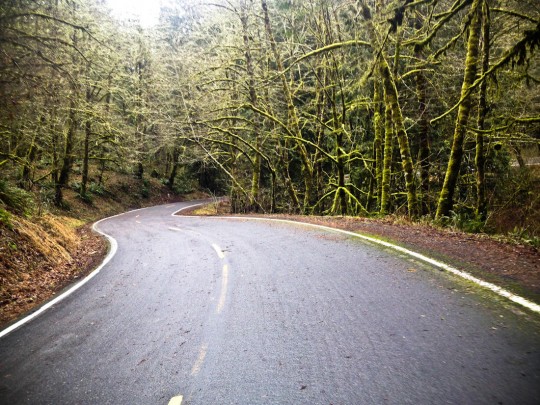 The last time I was on Haines Road I recall there being many potholes. So many in fact that someone had painted around them with creative designs and a rainbow of colors to draw attention to them.

KPTV has posted photos from the scene.

Crenshaw was an experienced rider and did a lot of racing in the singlespeed category of local OBRA races as a member of Team JVA. His Facebook page includes several photos racing bikes and hiking in the Gorge.

His father, Winn Crenshaw, posted this along with an old photo:

“Austin has been enthralled with bicycles since I gave him his first one when he was 5. He immediately proceeded to do dare devil stuff, fell and had a scar under his chin the rest of his life. I don’t know how many bones he has broken and how much road rash he has endured.”

I am so sorry to hear about this. My heart goes out to Austin’s family and friends. I’ll working more on this story tomorrow. If you were on the ride with him and/or have anything else you want to share about Austin with the community, please get in touch with me.

Was the motorist drinking?

Did you read the actual article?

“Crenshaw was riding downhill with a group of friends when he “crashed on a curve” and veered into the opposing lane of travel.”

This motorist deserves a major amount of sympathy. They have the trauma of seeing someone die and having to live it over and over again trying to think of how they could have avoided the unavoidable.

Explain yourself, Soren. No sympathy for the person in the car?

My condolences to everyone involved in this tragic accident.

Based on the description given there is no indication that the motorist did anything wrong. Austin veered into the oncoming traffic lane after crashing. The motorist may have been going under the limit, had full attention on the road, but could have been unable to do anything to prevent Austin from crashing in to him.

Middle of the Road guy
Reply to  Frank Roosevelt

***This comment has been deleted out of respect for Austin Crenshaw and his family and friends. –Jonathan ***

Zimmerman
Reply to  Middle of the Road guy

Wouldn’t it be smart to delete Frank’s comment too?

Exactly. What about respect for the driver and his family?

I understand Maus, it was meant to be absurd as the comment about the driver drinking. As in, what “difference does it make”.

My sympathies and condolences to both parties involved, and to Austin’s family. Certainly not a joking matter. 🙁

Aw man someone mentioned to me yesterday that someone died on Larch and what a bummer to find out now who. I met and rode and camped with Austin last year (2014) on the Oregon Outback ride. Such a nice person. Very sad. And he was a very experienced, very good rider. D@mn

Austin played a huge part in the fundraising for an injured cyclist a few years ago. He wasn’t only into cycling, but also the cycling community. He was a wonderful human being.

My heart goes out to Austin’s friends and family.

I met Austin several times at work parties for a mutual friend who was injured in a biking accident. He was so incredibly kind and upbeat. This is such heartbreaking and tragic news. My deepest condolences to his friends and family— especially Reagan.

No matter the weather or circumstance, it was always heartwarming to see Austin on a ride. Always. He was one of the kindest people I’ve ever met, and I can’t imagine a world without him. He was a pure passion rider, doing it for the sheer experience and camaraderie. I’m a better person for having known him.

I had the pleasure of meeting and riding with Austin and his partner when they moved here several years ago. He was a very nice guy and had a love for cycling. My heart goes out to his partner and family.

A very grim coincidence is that someone was killed while driving the next day at the bottom of Alex Barr Road when a large tree branch fell on their car.

🙁 RIP we have to stop the car merging into sholder.

Go back and read the article. There was no issue of a car merging onto a shoulder.

What a bummer for everyone involved. The roads in that area are pretty narrow. Even in a car there’s a decent amount of risk. One lapse in attention or one mistake by a driver or cyclist can end in tragedy.