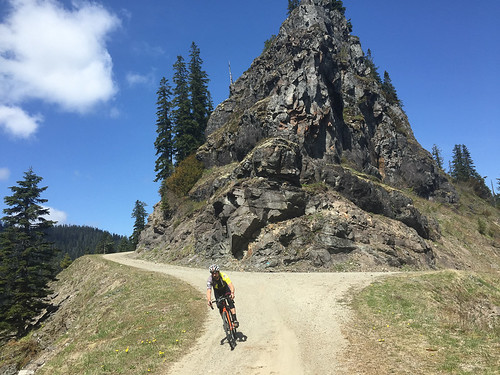 Our reward for some tough climbing.
(Photos by J. Maus/BikePortland)

This ride recap is sponsored by 21st Avenue Bicycles. They’ve stepped up to bring you more coverage of bikepacking and adventure rides. Stay tuned all year long as we explore the best backroads and bike-camping spots in Portland and beyond.

Just north of the Columbia River lies a bastion of unpaved backroads within striking distance of Portland. It’s the Gifford Pinchot National Forest and it has been tantalizing me for a few months now. So, when I saw the Gifford Gravel 50 ride pop up on social media I instantly added it to my calendar.

The ride is the work of Camas, Washington resident Todd Shank. Todd is the owner of Salmon Creek Cycle Co, a by-appointment-only mobile bike repair business he started doing full-time after leaving the corporate world last year. Like many similar rides in this era of unsanctioned group rides, Todd scouted the route, published a website and promoted it on social media. He provided no formal support whatsoever. 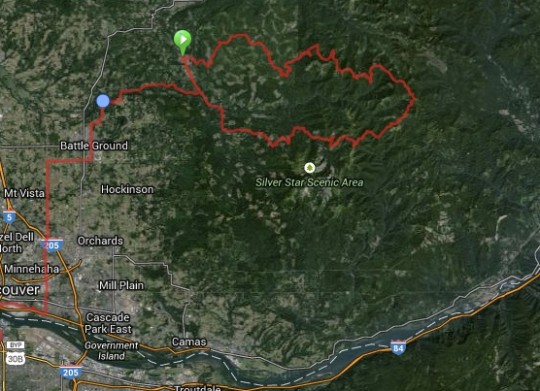 See the details and get the GPS here.

On Saturday when he showed up at the start — a gravel parking lot in the tiny town of Yacolt (population 1,600) — he was pleased to see nearly 50 people ready to ride. They came on a wide variety of bikes. There was everything from traditional road bikes with 28-32mm tires, full-suspension mountain bikes, and even a fat-bike or two. 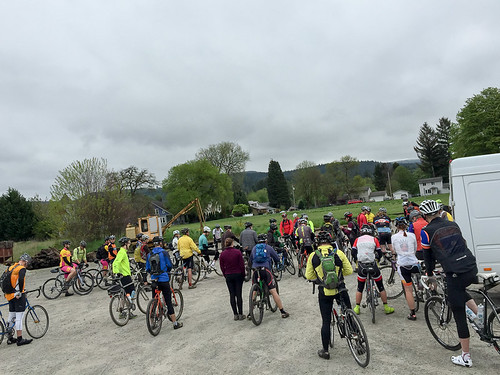 I had no idea what to expect; but I was eager to ride new roads and see new views. There’s something special about pedaling to places for the first time. (I’m also planning a three-day, two-night bikepacking trip from Portland to Trout Lake later this year and figured this ride would be perfect reconnaissance.)

In case the roads got rough, I brought my new Salsa Vaya built up with custom parts from the expert crew at 21st Avenue Bicycles. I was rolling with tubeless 40mm tires (the knobby “Nano” from WTB) and some new frame bags from Revelate. Before we rolled out, I got familiar with the Yacolt Trading Post. I picked up some snacks for later and grabbed a very detailed map of the area that was recommended to me by the clerk. 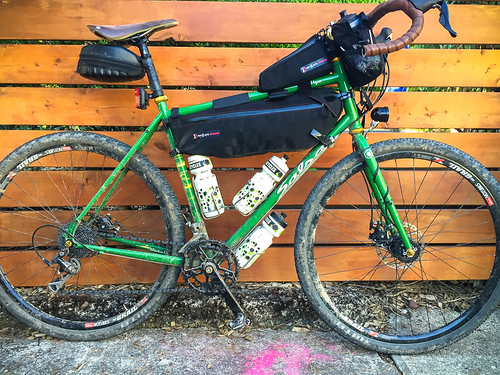 I am really loving this set-up. Handles big rides and tough roads all day long.

Back in the parking lot, Todd shared a few notes of caution about the route, then we were off. We rode on pavement for just a few miles before the dirt and rocks — and the fun — began. 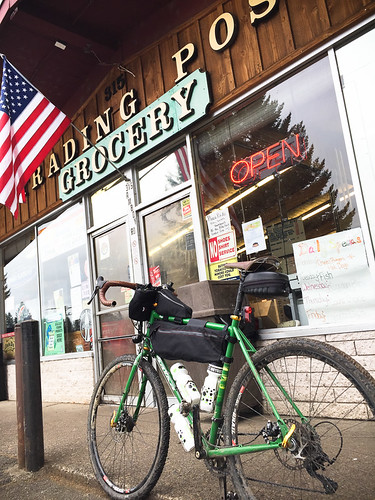 Every good mountain town has to have a trading post. 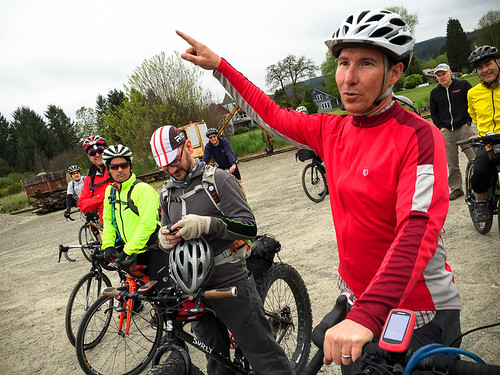 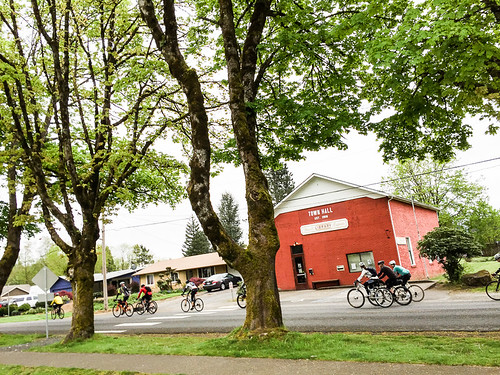 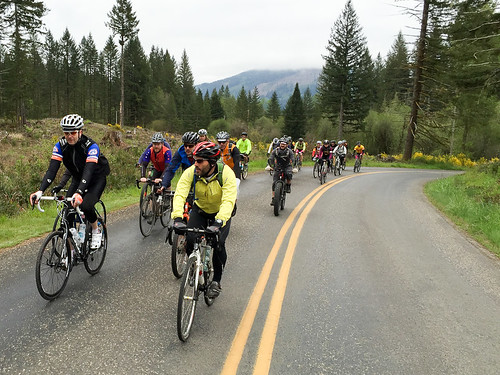 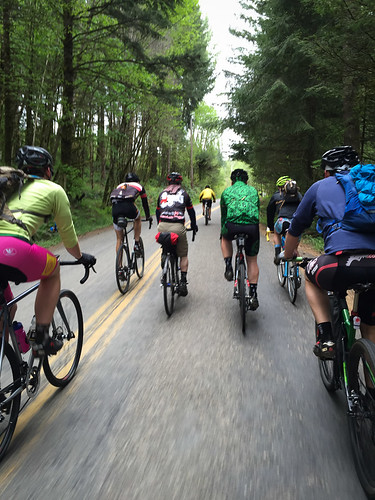 We climbed a gentle grade for the first 10 miles or so, following Big Tree Creek up to about 2,000 feet elevation. Then at about mile 14 the road turned skyward for a tough three miles of climbing as we crossed into the Gifford Pinchot National Forest. The next 15-17 miles were some of the best of the entire day. We rode along a spine high above the Lewis and Washougal rivers that afforded dramatic views of Mt. Adams to the east and Mt. Hood to the south. At our highest point we crested Lookout Mountain at just over 4,000 feet. 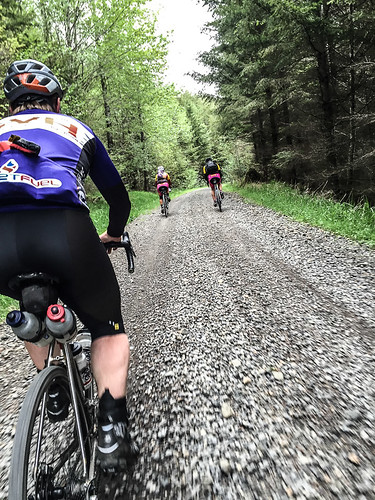 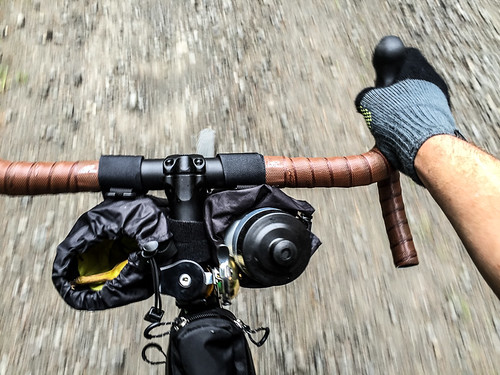 This was my first timing using these feed pouches from Revelate. Loved the extra space for my bottle, snacks, and phone. I just have to remember to keep them cinched shut when the going gets rough. 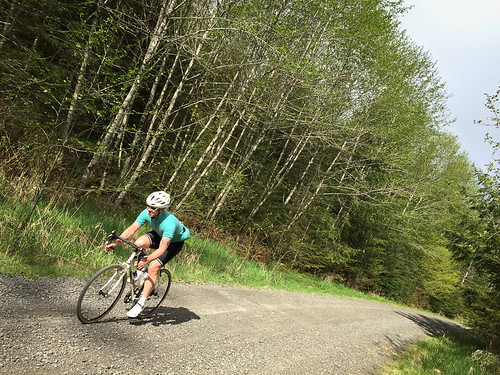 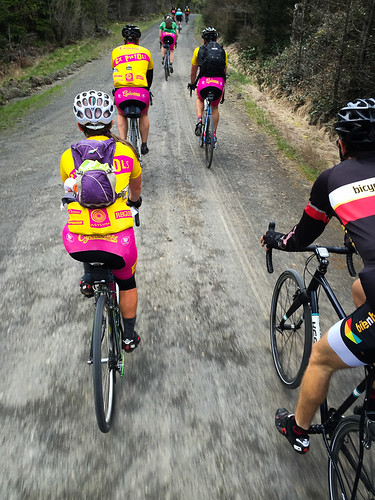 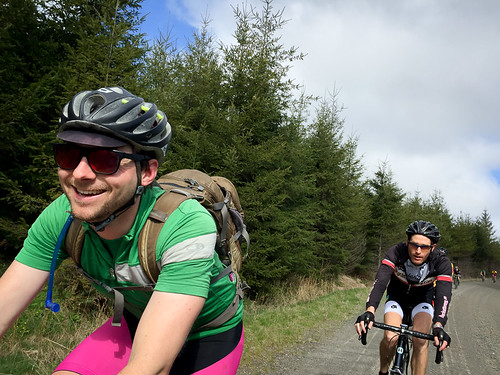 Patrick Croasdaile all smiles during the early miles. 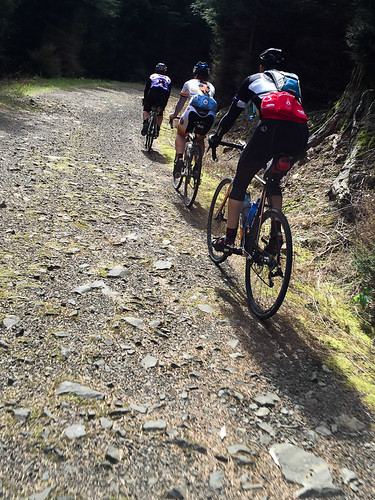 I think the rocks and tough road conditions caught a lot of people off-guard. 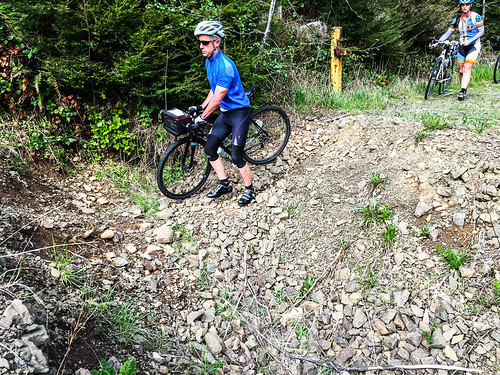 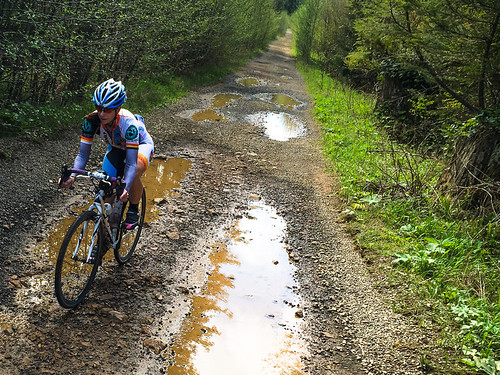 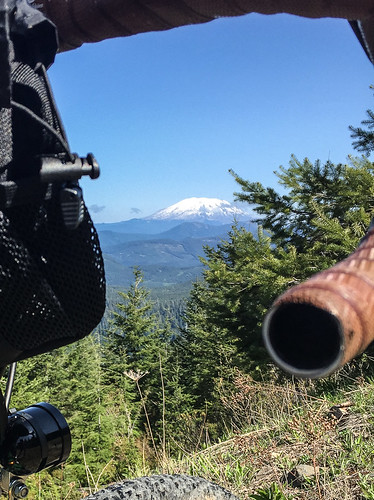 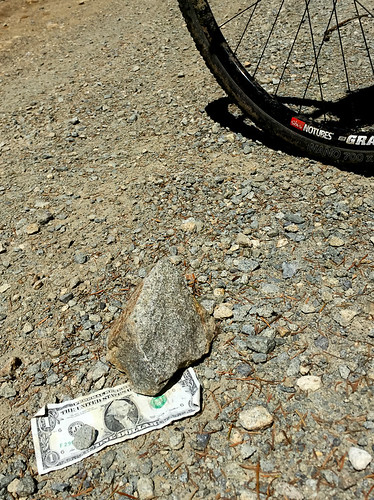 KOM prize was a classy touch. 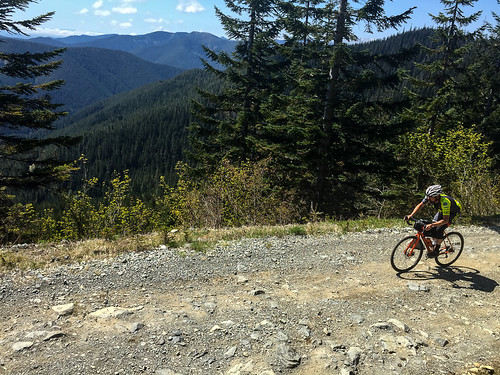 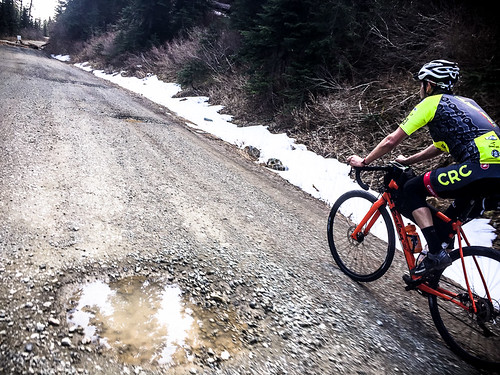 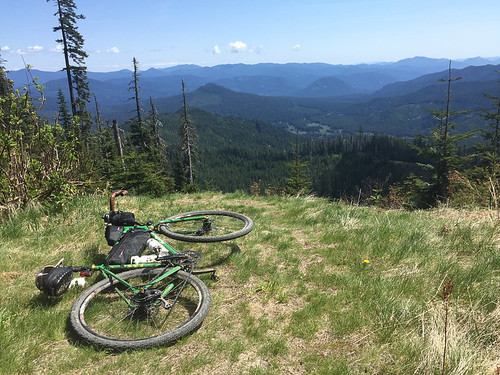 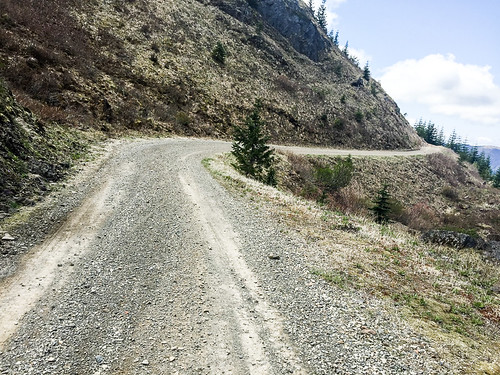 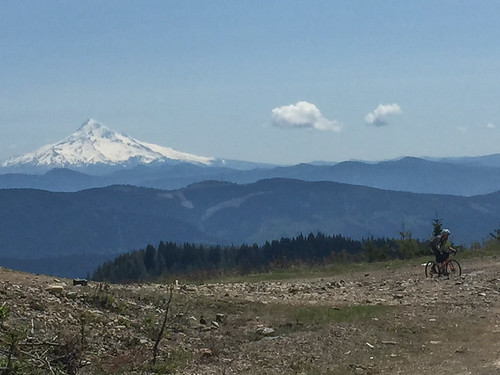 Most of the day’s major climbing (a total of about 6,800 feet) was over by mile 37 when we reached a large clearing with unobstructed views of Mt. Hood. It was a good place to catch our breath before an absolutely unforgettable 6.5 mile descent on National Forest Road #41. It averaged a 10 percent grade and there were incessant rocks, ruts, and loose gravel sections. I was loving it, but almost had to stop before it was through to rest up a bit. In some ways that downhill was almost harder on my body than the big climbs! 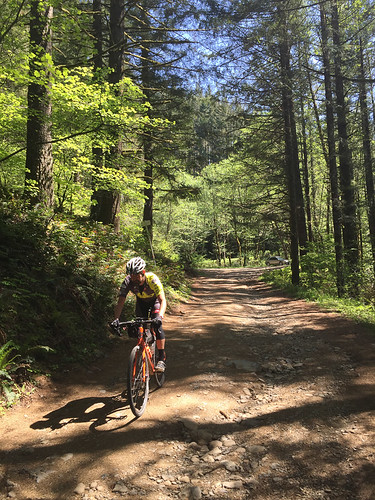 At the bottom of the descent we crossed a bridge over the crystal clear rushing waters of Cooper Creek and began the final climb and descent back to civilization — but not before my riding mate Chris Brannen filled his bottles straight from a big creek next to the road. I had plenty of water left and was a bit sheepish to drink unfiltered. Chris noticed the look on my face and said, “What? This isn’t Mexico. I don’t see any cattle around either.” (He did not get sick, although he made a wrong turn after we separated later down the road, so I’m glad he topped off his bottles.) 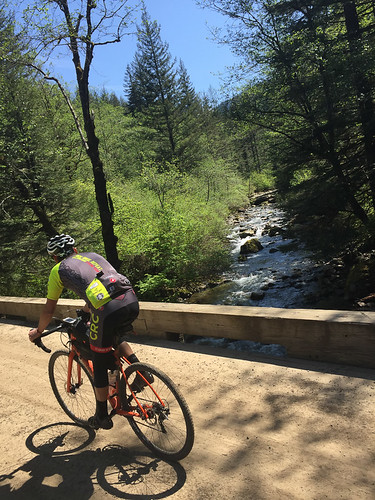 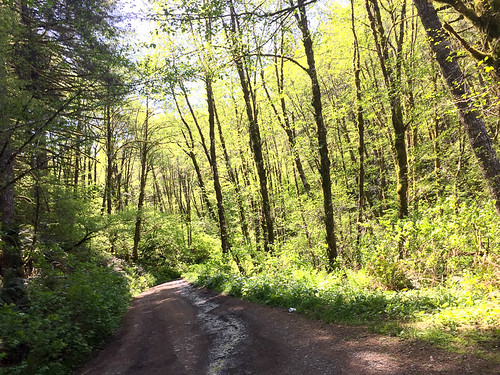 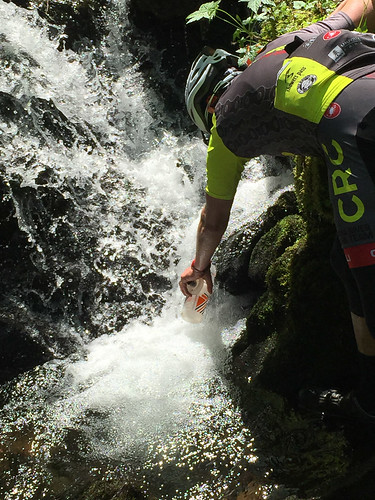 A few more relatively uneventful miles and we eventually connected to the smooth pavement of NE Dole Valley Road, which delivered us back to Yacolt. 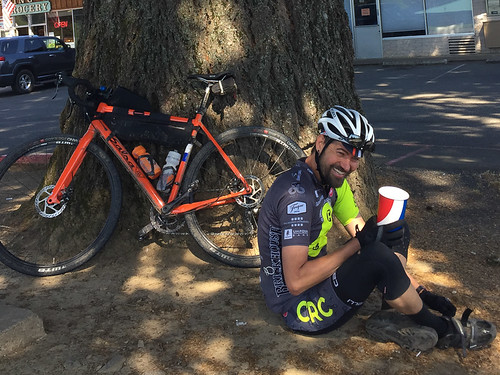 Chris Brannen, with one of those tired/happy smiles.

If you’re looking for some adventure and don’t mind crossing the border into Washington, this is a fantastic loop I highly recommend. Just make sure you don’t skimp on tire size. I heard there were lots of flats out there.

And if you are feeling frisky, I found a nice route from Yacolt back to Portland that adds about 40 miles to the ride. Check out the route at RideWithGPS.com.

— Read more from this series here.

Looks like a fun ride, i’m going to try it sometime but i’m going to do a Clackamas to Hood run first to see if i can handle the elevation ride.

I generally do 70 miles around portland occasionally but its mostly flat paved pathway/trail riding.

Tomas and I made up the tail end of the group, but we had the most fun on our fat-tire bikes, especially on the long descent. Surly Knards and babyhead rocks are a great combo!

Thank you for this inspiring report and the wonderful photos. This is exactly the type of riding I would like to start enjoying. But I’m not sure if I have the right sort of bike. Clearly my 17 lb road racer with 23 cm tires is unsuitable, but I’m wondering if my fully suspended Santa Cruz Superlight MTB is overkill. Given how few actual MTB trails there are around PDX these days, I’m wondering if I should just sell the SC and get something like your Salsa for these long gravel excursions. From what you overheard on your ride, were many of the fully suspended mountain bikers regretting their rides and wishing that they had ridden bikes with larger wheel sets, or did they seem happy enough? From your pics, I think that having a fully suspended bike would have been useful in some of those rougher and more technical sections, but overall I can imagine that a MTB would just become overly fatiguing after the first 30 miles.
Thanks again for the excellent field reportage.

There are miles of fun singletrack up in that area, too.
http://www.dnr.wa.gov/Publications/amp_rec_yacolt_burn_non_motorized_trails.pdf

I rode my hardtail 29er (w/rigid fork) and 2.2 tires (zero flats), and I thought it was ideal. Dreamt about having full suspension or 29+ on the rocky descents. If the full suspension doesn’t bob on the (many) climbs, I think it’d be really nice. I normally ride a cross bike on the Velodirt-style gravel routes around OR, but I was super happy to not ride a CX bike on this route.

Hybrid bicycles combine the best features of MTB and road bikes and can be enjoyed in a wide variety of conditions.

Assuming that was your picture of the dollar bill…congrats on the polka dot jersey!

Hah, I was wondering if that bill would be there a week later. I left that there the prior weekend when riding the same route.

Sunshine and no rain or snow at the first of May. Wow – I was up that way riding in July and ended up with hike a bike over the snow.

Paul in the 'Couve

Thank you. I’ve been planning to explore out there for years (kids…) but don’t know my way around much. Hate to waste the time and gas driving it. Now I have a starter route to get out there and see it.

Rick
Reply to  Paul in the 'Couve

Would you like more mountain biking trails closer to the Portland metro area?

“What? This isn’t Mexico. I don’t see any cattle around either.”

I grew up drinking from streams and tarns in the Cascades and Olympics, often untreated. It wasn’t until about 1980 that I got giardia, up high in the Icicle Creek area. It’s a sh*tty experience, let me tell you. There are other pathogens in clear mountain water, too. If I was thirsty enough, sure, I’d take my chances, but if I were riding a lot of backwoods like that loop, I’d pack an ultralight filter or sterilizer.

Exactly. I might drink water dripping right off of a glacier. Maybe.

As far as rivers/streams go, for all you know there could be a dead deer floating 50ft upstream. Not worth the chance.

Thanks Todd! The route worked perfectly. If anyone rides out there soon, my Wahoo RFLKT popped off my handlebars around mile 10-12.

before or after the tank traps?

Though it was tough, I enjoyed the ride. Thanks for posting it on your weekend event guide.
I would definitely fall into the category of rider who was caught off-guard by the (size of) rocks and tough road conditions. This was my first adventure on my new cross bike. Next time I do this route I would use larger tires, I had 32 knobbies, and some lower gears, 34×26 was not low enough for me. I did find a pocket camera on the route, did you drop yours?

Thanks for the coverage Mr Maus. If you are considering this route please be aware of a few things. No support, no cell service usually, and you must be able to fix your bike if it brakes or the walk out will be painful and long. Be safe and ride larger tires and have a go at the descents.
Howard, thanks for the KOM touch.
Until next year!! Saturday May 7th, 2016 9am

Depends on your cell carrier. There was a lot of AT&T coverage out there–only one place did I find No Service.

Yeah, generally, there were more than 3 bars of AT&T coverage up on the ridges, and little to no coverage down in the lowest elevations/valleys. Pretty straightforward.

This looks fun. I should probably start a “trail rides” section in my bookmarks, but I don’t always remember to read every article, so maybe you could could create a “ride maps” section that puts links to fun rides like this all into one place? Then when I want a weekend ride, I could click over and peruse the options.