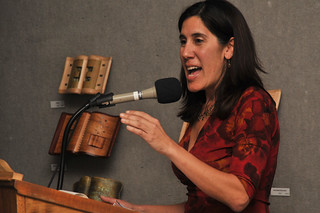 If anyone in the country knows what it takes for a city to improve its bike transportation, it’s a woman whose entire business depends on cities doing so: Mia Birk.

Birk, the former Portland bicycle coordinator and senior local principal of Alta Planning + Design, was indirectly quoted in a comment this week from BikePortland reader Matt, who said he’d heard Birk’s theory about this in a conversation once.

Matt seems to have remembered it. It’s a memorably simple formula.

I once sat next to Mia Birk at a meeting where she said that in order to create a city that is friendly for cycling you need the following things:
1. Political leadership
2. Advocates (an organized group)
3. City Staff/Planners who ‘get it’ and at least some who actually ride bikes
4. A good bike plan
5. A dedicated source of local money (which can be leveraged toward larger grants)
Getting elected officials who understand the issues and take the lead is the only way that forward movement is going to happen in Portland. The other four items on that list either already exist, or will come after the political leadership shows up.

Which of these does Portland have today? Jonathan shared his own take on this in a reply to Matt’s comment; so did BTA Advocacy Director Gerik Kransky, who had written the guest post that prompted the comment.

Intriguingly, Jonathan, Gerik and Matt all seem to agree on which two items Portland is missing at the moment: #1 and #5. With #1 being the most important.

This is something we’re thinking a lot about at BikePortland. Stay tuned for a new recurring feature that we hope will help the city patch this leak and get rolling again. And in the meantime, let’s all give Matt some thanks for taking those mental notes.

Yes, we pay for good comments. We’ll be mailing $5 to Matt in thanks for this great one. Watch your email!

Political leadership and a dedicated source of money seem pretty linked to me. When Steve Fritz was killed on I-5 it took Matt Garrett (ODOT Cheese) only a month to come up with $7M to add steel cable median barriers to that stretch of I-5.

I know what you’re saying, but the key word here is “dedicated”. No matter what narrative the City is weaving about its budget, there is ALWAYS some slush to be scooped up for an emergency of PR proportions. But a standard, not-subject-to-political-whim budget line item is much harder to create and maintain.

Good point. Not being that close to city budgets, or much of anything to do with running a city, I wasn’t aware of that distinction.

I would add that ever since I heard Mia mention this in the meeting I attended (maybe 4 years ago), I’ve tried to carry it with me in the work that we’ve been doing in Milwaukie, and we are starting to see results down here. We’ve got newly elected council members who are on board, a decent (but not perfect plan), some staff that are on board and who cycle, and a group of residents willing to advocate. The only thing we seem to be missing is the dedicated funding (and I have a feeling that will come eventually).

I also strongly believe that Mia’s 5 ingredient recipe can be used as a blueprint towards many other issues, not just bikes. Apply it towards sidewalks, skateparks, safe routes to schools, parks, school funding, anything in the public realm that politicians can control or touch…. and you can get stuff done. It just takes work.

To hell with winning hearts and minds. Grab em by the balls…the rest will follow.

Prior to Bike-Summer/Shift,Critical Mass and such, save the BTA,there was much less going on, advocacy-wise.Nascent voices were starting to be heard, wanting to start the discussion ( Mia being among the clearest) but it wasn’t until the streets got shut down monthly by Critical Mass and more and louder voices started working towards improving access to the City by bicyclists. And many did not much like being inconvenienced by the CMers. The Police and City spend enormous amounts of money and effort trying to squash the movement, to little effect. Finally, the effort to resolve the tension led to actual investment in the dream. But once we had that ‘win’ the heat was off the city and indifference set in. And we are again at that point where we need to take to the streets, and push for better facilities and demand, cajole or force the city to act.
All governments respond the biggest pains, not the loftiest goals.

I agree with what you said based on its spirit, but those protests occurred before we had any clout as a bike city. You will get backlash now because many people who were inconvenienced the first time will see the critical massers as entitled and destroying businesses, despite the “good will” of our “gracious” representatives.

It will do more harm than good.

A couple of stories back was $33M for biking and walking upgrades. It seems to me that covers some of both #1 and #5.

$33M sounds wonderful as a Powerball jackpot. Funding a city the size of Portlands annual pedestrian and bike improvements with a pot that size reflects how little the City wants to spend on safety.That $33M probably doesnt’ cover the actual cost of the mounted patrol.

Yet our city has a budget 3 time Indianapolis a comparably sized city which also has to deal with weather based issues we don’t.

Overall it’s not how much you spend its how smart you spend, and Portland doesn’t spend smart.

The story was about ‘possible’ money for ‘county’ bridges.
It’s on the current front page.
If the electorate is so ill informed that they can’t remember a story from last week, let alone so lazy they can’t scroll down once or twice on the main page, I don’t hold out much hope for any organized push back on city hall.

City leaders that don’t ignore half the city would be nice.

And you need a copy of ‘Enabling Cycling Cities; ingredients for success’. Runs partly parallel with Mia’s remarks and gives more detail to the organization of the city’s bureaucracy for a good result. http://www.pas-port.info/#publisher_07

I appreciate all the work you do to promote cycling in Portland. I’m not familiar with Ms. Birk (familiar with the name because I’ve seen it referenced here).

One problem I had with the article is “…a woman whose entire business depends on cities doing so…” raises some conflict of interest flags for me.

Don’t get me wrong, I’m as big a free marketeer as there is, and I love seeing people making money producing bikes and bike related services. But, when your business depends on the actions of “Political Leaders” and “City Staff” that starts to look like rent-seeking and cronyism.

The usual caveats about cars and oil companies receiving truckloads of freebies from the government.

By the way, this is not intended to call into question the integrity of Ms Birk. Only to say, it gives the appearance of a potential conflict.

conflict of interest: NOUN
1. the circumstance of a public officeholder, business executive, or the like, whose personal interests might benefit from his or her official actions or influence: The senator placed his stocks in trust to avoid possible conflict of interest.

2. the circumstance of a person who finds that one of his or her activities, interests, etc., can be advanced only at the expense of another of them.