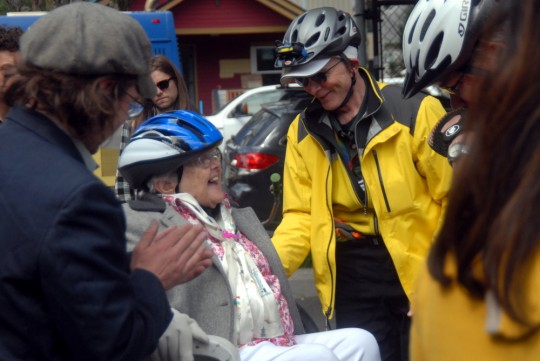 The weather was perfect for a pedicab trip to Peninsula Park.
(Photos: M.Andersen/BikePortland)

A cohort of residents at local senior housing facilities took a roll through North Portland in style Wednesday, including one 96-year-old taking her first cycle trip ever.

Organized by local bicycling advocate and Providence Elderplace optometrist A.J. Zelada and sponsored by Providence as an Earth Day-themed event in its Elderplace program, the pedicab and cargo bike ride from North Albina Avenue to Peninsula Park drew smiles from participants of at least four generations.

“I rode a bicycle,” said Luu Quaiuu, a native Cantonese speaker, in broken English, before being helped into the bucket of a cargo trike. “But now I’m very old.” 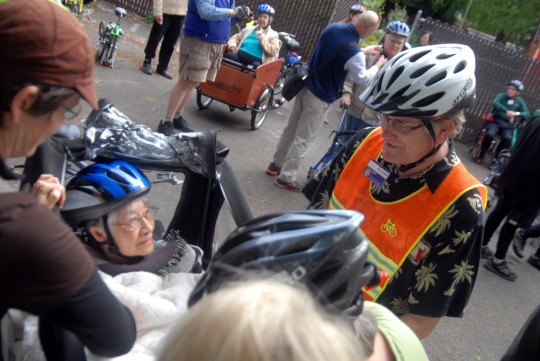 Carol Freda, 76, said she hadn’t ridden since moving from Chicago to Portland 20 years ago to live near her late sister.

“When I came here I stopped riding altogether,” Freda said. “I can go down the hill but I can’t go back up. I would get asthma attacks. It’s just not worth it.” 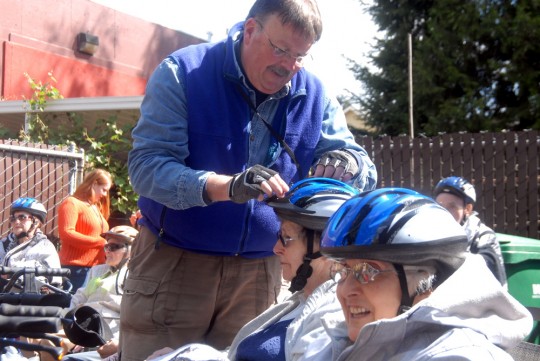 Freda said that among Elderplace’s events, this ride rated an 8 or 9 out of 10.

“Since we got Dustin, we’ve had a lot more interesting outings,” said Freda, who said she doesn’t get a lot of other social time since her sister died a few years ago and her niece moved out of town. 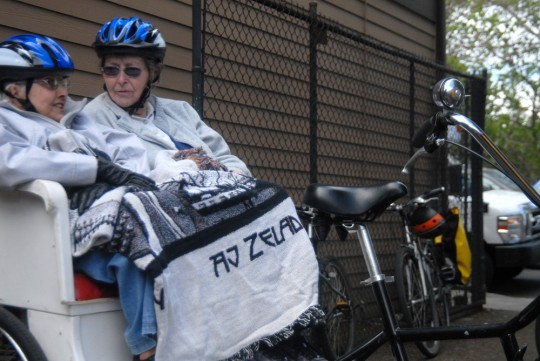 The ride set out from Elderplace’s Marie Smith Center on North Albina a little before noon, with Portland Pedicabs providing some of the chauffeur services. 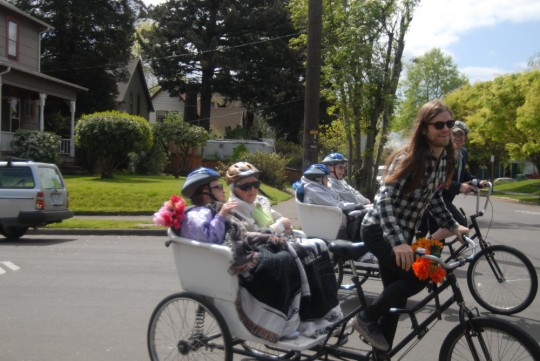 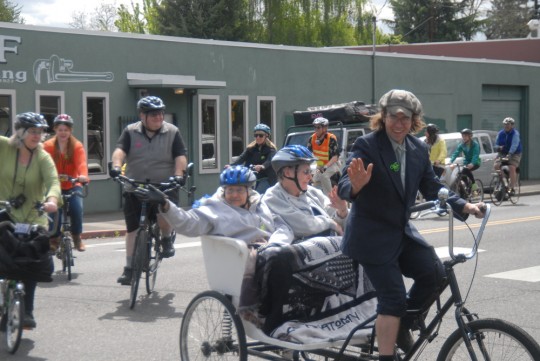 The ride even had music. Biking advocate Kiel Johnson had shown up with an on-bike speaker system playing Frank Sinatra classics. 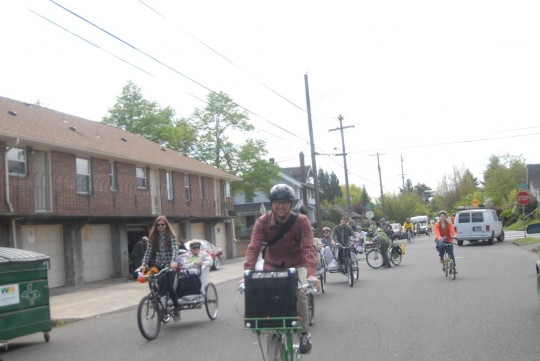 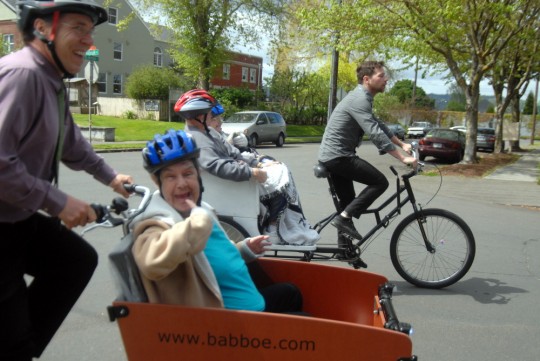 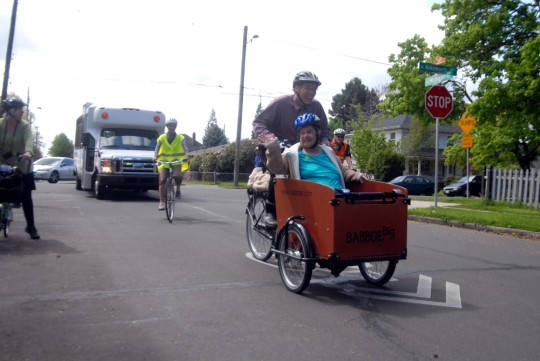 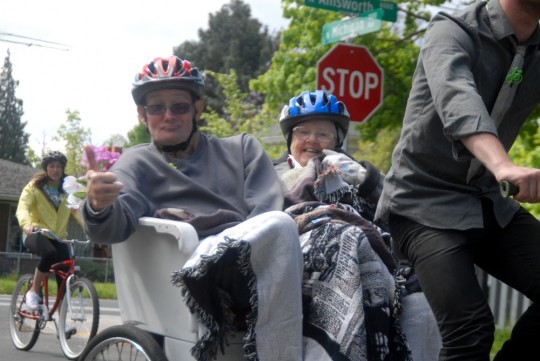 “This is an attempt to start really making the 8 to 80 rule of active transportation
a reality for an inclusiveness of ALL,” Zelada, himself a regular participant of Shift bike fun events, wrote in an email. “I think this is a prelude for all the Shifties as we all enter those golden years.” 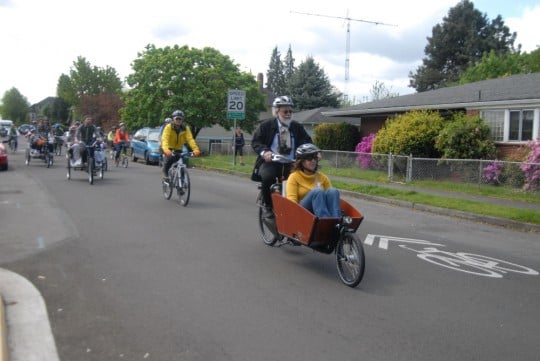 Martine Sacks (center below) was among the skilled corkers; I only noticed one honk from someone annoyed to wait for the ride to cross a street. 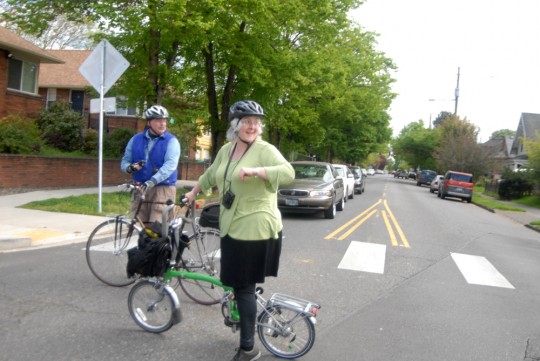 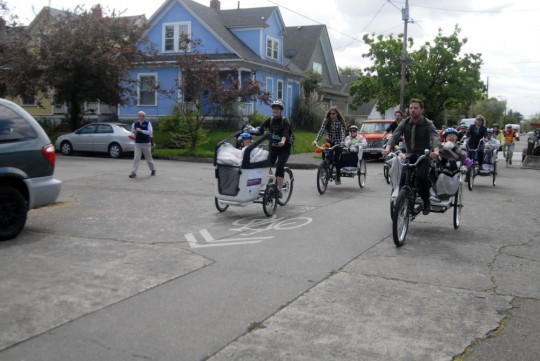 There was also a little bit of tension when one of the trikes got stuck briefly entering Peninsula Park, causing a backup on North Albina Avenue. But a couple of the participants were pretty effective ambassadors, waving in thanks to people in cars while the problem was resolved. 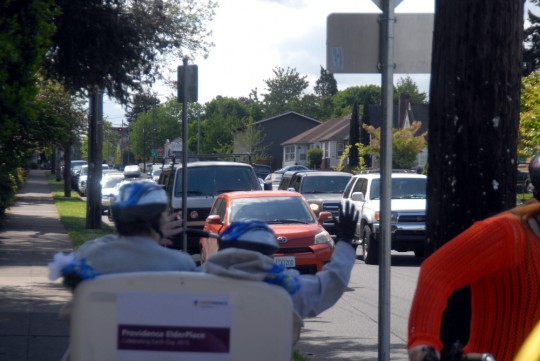 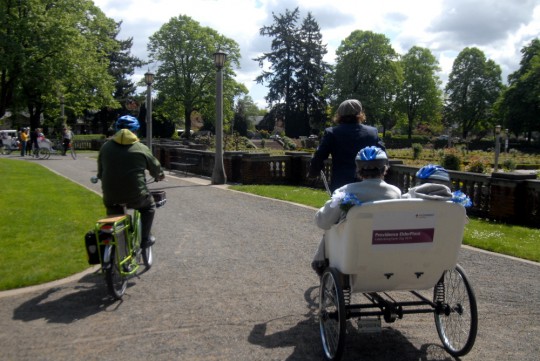 At the park, Zelada gave a short address at the bandstand about its history — envisioned, like many other parks in Portland and around the country, by the Olmstead brothers. 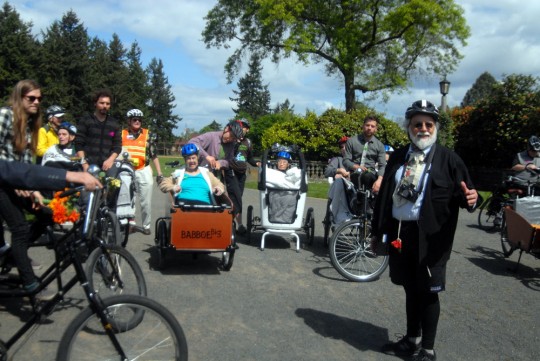 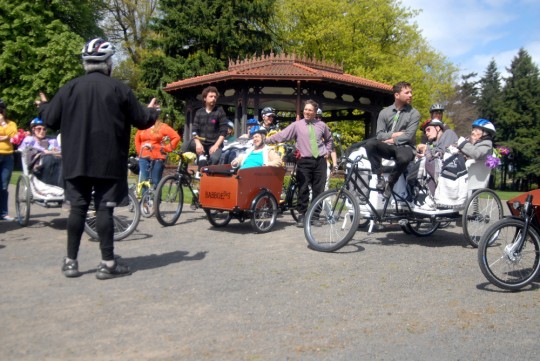 And then the pedicabs headed down into the park’s rose garden for a few loops around the fountain, followed by a stop for picnic snacks. 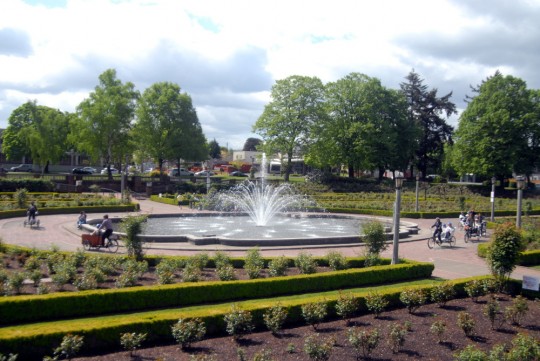 “Maybe a 96-year-old can do this after all,” said one participant, Fran Woolford, who is only a bit younger than the fountain. Woolford, whose birthday was this month, said she’d received a bicycle from her aunt when she was a little girl, but had never actually used it.

City staffer Greg Raisman, there to document the event, asked Woolford how she liked her first ride.

John Bilinowich, who was driving the van that would take people home after the event, agreed.

“It’d be more fun than riding in the vans, that’s for sure,” he said. “They’re meant to haul stuff, not people.”

(I saw similar efforts done by the City of Palo Alto back in 2005).

They look like they’re having so much fun! Nice to see. I’ve read that novelty helps keep the mind young and fit, and I know it’s true for me. Seems like the benefits of this activity go so far beyond fun and fresh air, really providing a novel and stimulating experience for everyone concerned – even the impatient horn-honkers.

Oh my goodness this is the most adorable thing I’ve seen in a long time. So awesome! I just love to see the smiles on these seniors’ faces! I’m not gonna lie, I teared up a bit :’)

The peddle taxi is a pig, its too wide for most normal bicycle lanes. The Christiania is a nice cargo trike the only problem its expensive and hard to find. What is needed is a single wide trike that can take mom shopping not on special occasion but any time in the week. Why do I say this I am a 65 year old amputee that ride a peddle power trike that tries to do as much shopping as possible, this is what is needed for the older generation.

rachel b
Reply to  The Odd Duck

My hat’s off to Zelada/Providence for putting this excursion together–wonderful idea! The Odd Duck has some valuable input here–is there any company making a reasonable single-wide trike?

Spiffy
Reply to  rachel b

Spiffy
Reply to  The Odd Duck

standard bike lanes are supposed to be at least 5′ wide, plenty wide for a normal trike…

the problem I find is that with crowned roads you’re fighting the angle trying to run you into the curb, so you’re never quite upright… taking the sidewalk on a busy road or the middle of the road on a greenway helps…

Yay! What a great idea. Bikes for all!

To show I am not trying be a boat rocker but to get people to start to think down the road, this is a standard question I will ask on different bicycle sites.

To help others with the same problems as myself with artificial leg, getting around. If I don’t have a car handy and just to get around with out a car for the fun of it. I thought I would pass some conclusion along better understand what the future might hold for us.

This my thought on moving past the 20-30 year old with there Tour de France bicycles and look to what lies ahead.

When looking at what changes need to be made over the next couple of generations to add larger sidewalks and bicycling paths, its should be look at this perspectives is person X. Person X will be the need to have a market, and or a pharmacy with in three or more rings, that would be round trip, Ring 1, a mile, Ring 2, 11/2 miles and Ring 3, three miles. The reason I have set this up this way, as a person with artificial leg, a three mile walk round trip I can do on a good day with a slight climb in elevations. Using as a guide, you can figure out in a given location how many person for one reason or others will walk, bicycle, or use an electric scooter for transportation to said location.

One of the things I would like to see is a transport trike. What this a narrow down peddle taxi with a driver and one person that will fit in a standard bicycle lane. This way it can take an person who can’t walk to the store and back. I tried several companies but they didn’t warm to the ideal.

wsbob
Reply to  The Odd Duck

Odd Duck…there seems to be plenty of trike builders out there, so I’m sure they know this, but what are the range of widths to which functional trikes have been built? The stability issue of bikes isn’t something that only older people are concerned about. On the other hand, maybe the width of the old standby Schwinn adult trikes is more stability than some people need. A happy balance between extremes might be worth looking in to.

One of the discussion that came up over at bikeforums long ago, is something I remember from time to time. It had to do with people interested in trikes they creatively re-purposed into lightweight trikes. Essentially, same as a road bike, but in the back, with two wheels instead of one. Bit of an engineering, design challenge.

Could work with two wheels in the front too. Haven’t seen him in a long while now, but there was a young guy out in Beaverton that would come by the starbucks once in a while, with a mountain bike he’d prototyped to have two wheels in front, designed so the bike’s front wheels turned for steering. The front wheel arrangement was designed to allow the bike to lean to either side with the rider in turning the bike.

the pictures really show how silly the helmet market is, and how it reflects on bicycling in general…

this is just one reason that bicycling isn’t taken serious as transportation… the majority of bicycles I see on the street are the equivalent of Formula 1 race cars, with the rider usually outfitted in their special racing gear, including the race helmet…

My thoughts exactly. If there ever was a time and place to skip the helmets it would be here. Even the pilots of some of those rickshaws skipped them.

I think the seniors look just fine in their racing styled bike helmets. Great things about bike helmets, are their benefits when they’re not actively involved in absorbing the impact from a crash: They moderate head temperature, helping insulate from both hot and cold extremes, and, they offer protection from the sun.

Plenty of people, not just seniors, get cold easily when they don’t have a lot of blood circulating through their system. Which is why, often when people are walking around in shorts and t’s, bareheaded, other people are wearing heavier clothes, and warm hats. I’m glad to see there were older people having an opportunity to enjoy this event, and that there were younger people enthusiastic to help them with enjoying it.

This is very encouraging. There doesn’t seem to be a lot of compassion for the elderly in the cycling community normally. They don’t ride…they don’t matter.

“There doesn’t seem to be a lot of compassion for the elderly in the cycling community normally.”

Really? I haven’t encountered this. What form does this lack of compassion take in your experience?

Chris I
Reply to  Lester Burnham

There is very little compassion for the elderly in all communities. Try asking one of your driving coworkers about elderly drivers some time.

Great story!!
Odd Duck–you’re a pioneer. Thank you! I’m trying to set my life up so I don’t need a car, as well. As to TdF-style helmets: I’ll be 60 this year and I want my bike gear to make me feel fast, even when I’m fixing a flat. Fast, sleek and sixty. Outta my way!

Anybody honking at these folks getting sun & fun should be handed a grumpass ticket on the spot and made to ride along with the gang. Hahaha, that’ll fix ’em. 😉

Most three wheeler have a standard width of 28-32 inches and are very stable on smooth level roads, where I live the roads for the most part haven’t seen new pavement for the last 20 years or so and are overly crowned can make if difficult to ride. The other problem is a five foot bike lane would be nice, however in the real world most of the bike paths I have encounter or four feet or less, some are accidents waiting to happen do to poor planning and the lack of foresight. even thought the trike is slow I like the leisurely ride as I can see more of the world around me. As far as helmets goes I like Giro helmet in a bright yellow. it’s a nice comfortable helmet even on a hundred degree day doing a slight clime.