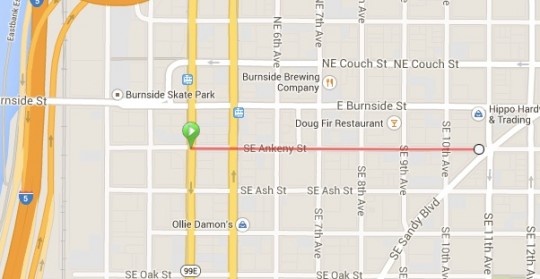 There has been much debate about whether the Portland Bureau of Transportation should prioritize investments in “safety” or “maintenance.” The terms of that debate are code for the same old “us vs. them” dichotomy that poisons many of the transportation discussions in this town: “Safety” is where all the biking and walking projects reside and “maintenance” is where all the major arterial paving, bridge rehabs, and generally car-centric projects dwell.

I’ve always tried to avoid that divisive thinking. I’m fine if all the money goes to maintenance projects — as long as those projects are prioritized with not just driving in mind.

Now, I’m happy to report that PBOT is paving a neighborhood greenway, specifically because it is a known and popular route for bicycling.

According to a statement released today, PBOT has already started to grind down the existing pavement on SE Ankeny between SE Martin Luther King Jr. Blvd and Sandy. It’s a short stretch (about 1/3 of a mile), but it’s a key bicycling connection.

PBOT spokesperson Diane Dulken told us today that “Neighborhood greenways are a priority for us to maintain.”

The work is expected to last until March 13th.

During the construction, bicycle riders should detour south to SE Ash Street.

How is the construction detour? As we are all aware, PBOT hasn’t been great with detours and construction reconfigurarions recently.

I’d rather have a safer/more protected way to cross Sandy at that intersection than smoother paving. Just my opinion.

I agree completely. Maybe they could install a flashing crosswalk light at the intersection of Ankeny and Sandy (that cyclists can press to activate) like at 33rd and Klickitat – that would make it a little safer to cross.

Agree. The pavement was perfectly good before (I ride this route every day). I have no idea why it needed repaving, but I don’t see how it can be construed as an improvement for cycling conditions. Is there more to the story here? There is a large apartment complex going on at 10th and Ankeny…

Repaving is done in advance of deterioration so that full rebuilds are not needed later. Full rebuilds cost a lot more than refreshing the running surface to prevent water infiltration.

“Repaving is done in advance of deterioration so that full rebuilds are not needed later. ”
But that doesn’t explain why Ankeny got repaved ahead of all the other streets folks here listed, which were, by their estimates, in worse shape.

I ride this regularly, and I think that re-paving is a bit of a luxury! The pavement was in good condition. They also demolished and rebuilt ALL the curb ramps which were in good condition! I echo Alexis’ thought: I would much rather these resources were used to create a safe crossing at Sandy!

Chris I
Reply to  MaxD

They must be changing something with the curb ramps? Are they adding bulb-outs?

MaxD
Reply to  Chris I

I noticed this too. Almost called it in – to ask, why the rebuilds? The ones I saw were in very good shape – a few cracks, but not even a riser to trip you.
It felt like the city was getting scammed.

That’s what I thought, too. I asked Sara Schooley, Pedestrian Coordinator at PBOT. Because of a pivotal court decision years ago (Kinny vs. Yerusalem, in Philadelphia), when a municipality improves the road surface (grind and pave, not slurry seal), they have to bring the curb ramps up to standards for the disabled. And, that means the current standards, not the standards of 5-10 years ago. So, unfortunately, the ramp construction of a decade ago (?) must go, for Current standards to be met, as a part of the Ankeny repaving. That same ramp work will eventually be done on Clinton as a result of it’s relatively recent repaving.

That’s PBOT spending their money wisely (and then demanding more from us because they don’t have enough).

This does seem a little odd. As MaxD said, the sections they’re repaving aren’t all that bad to begin with and the City isn’t even addressing the worst section of Ankeny, from 2nd to 3rd, where the street is still cobblestone.

I agree Ankeny seemsed to be in fine shape pavement wise, but Sandy street crossing is scary. When I saw the repaving this morning, I assumed they were repaving because of all of the condos and infill that is being built and built and built.

I just walked by Ankeny at SE Grand and I didn’t see any detour signs. Just a “Bikes in Roadway” sign.

They’re repaving THAT stretch? I commute on the Ankeny/Couch/Davis/Everett/Davis Greenway out to the high 70’s, and after around 39th, the idea that this particular route is any kind of “priority to maintain” is laughable. The pavement is in terrible condition, and a couple of the intersections are laid out in such a way that it’s not possible to see the cross traffic. You just have to guess and hope.

I’ll take safety improvements over silky pavement any day, and for sure the Sandy crossing needs help, but if they’re going to put the money into repaving this route and claim that it has anything to do with the Greenway status rather than catering to to the fancy new condos, why spend it on the portion of the route that needs it the least?

Forgive my asking but isn’t this sort of an obsolete route? Unless people are coming from the east waterfront, isn’t it easier to take the burnside lane through to 15th? I always found crossing sandy to be a hassle, especially during rush hour, and then again at 12th. Before the bike lane went all the way to 13th on Burnside, I used to turn right coming off the bridge and ride this section of Ankeny, but not anymore.

Where do people go if they are heading West on Ankeny? I’d guess most just get on Sandy and drop down to the Hawthorne Bridge? It’s not a very easy route to get onto the Burnside bridge

north on 6th to Couch, then across the Burnside Bridge

I drop to Grand and left to Couch to avoid that horrible right hook possibility on Couch and Grand.

True, but the city has preliminary plans to complete the Ankeny greenway to 3rd Ave.

Not too concerned about being doored on that part of Burnside as those bulb outs are pretty generous and it is a wide bike lane. My biggest gripe is that taxis drivers love to use the bike lane as a parking strip anytime after rush hour.

You know how much longer the paving would last if the city actually prevented cars from using bike boulevards as cut-throughs? A lot longer, that’s how much. I’d be fine if they never paved them again, if we could keep car travel to local traffic only. Think of the savings!

Think of the lack of enforcement!

Think of the lack of diverters!

My thoughts exactly. If the hordes of drivers each day on Ankeny were diverted back to where they are SUPPOSED to be, the bike boulevard would pretty much never need to be repaved.

Are people still finding a lot of cars on Ankeny? I know I’m usually on in during non peak hours (at least not morning ones), but I haven’t really found it to be very heavily trafficked by cars.

they just repaved a decent section of SE Holgate from about 75th to 80th, but Woodward between 59th and 62nd still feels like riding on an old country road… Woodward in that area is more like a complete network of patches rather than one paved section… it’s been that way for years…

Any chance they will do the same to NE Holman? I often reflect on the overlap of safety and maintenance on Neighborhood Greenways as I am jostled along that street.

The Holman greenway is pretty long, any chance either of you could narrow it down a bit? And not the center strip section – that needs a rebuild.

A one-way section between 8th and 9th would be better than any repaving. Some real fast traffic down that narrow street.

Is this really the section of ‘greenway’ that needs this work the most? I don’t think so, and I’m sure BikePortland readers can come up with many higher priority areas for repair…

Michigan! (Between Kworth and Alberta). But then we release the double-edged sword. The only reason cars aren’t going 35 down Michigan is its poor conditions. I suppose I can broken record this point: diverters? Please?

The concrete road section? Can’t get BOM to do anything for some reason.

Looks like someone was repaving parts just so. of Kworth last week. The longer the construction stays up the longer it keeps traffic slower. Keep paving one patch at a time.

My nominations:
NE Holman from 8th-22nd (excluding a couple blocks around 15th)- super rough
SE Salmon from Grand to Water- washboard like surface and lots of potholes

Anybody get any pothole photos before the grinding began? It would be useful to have proof that this isn’t simply a bicycling project but is needed maintenance, too, for all users of that stretch of roadway.

there were no potholes

Apparently we bikey folks can complain about anything.

But think of it like this, we know money is tight, so they should spend it where it helps most. Take a look at the Ankeny on street view then try Woodward around 61-62nd or so…

“Apparently we bikey folks can complain about anything.”

I don’t understand your comment, John Liu. Did you actually read people’s posts? They didn’t just say Hmpf! They specifically pointed out that there was basically nothing wrong with the surface before, and that there are dozens of other bikeway stretches that could use resurfacing if it is resurfacing dollars that are in oversupply right now.

You can’t have a functioning democracy without people pointing out when things are done badly or unnecessarily.

I get it, JOhn, and it does sound like whining…BUT…this is what PBOT gets when it claims no money for anything out of one side of its mouth, then replaces A LOT of perfectly good infrastructure.

And people ignore what PBOT has said about the asphalt life curve and when it is best to spend money.

Got to make it smoother and easier for all those auto vehicles driving down Ankeny to avoid Burnside/Couch couplet!!!

For that money, we could have had like, TEN diverters.

Any chance you have, like, any basis for the 10 diverters claim? Maybe, if the diverters are composed of sawhorses and old sofas.

I like Adam’s point, though, even if it only would have bought 1.5 diverters. I think some of us have made it pretty clear that those would be a higher priority, make a bigger difference.