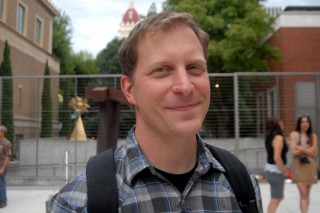 Update 9/17: The application deadline has been extended to Oct. 24.

The incoming chair and vice-chair of Portland’s Bicycle Advisory Committee are full of energy and they’re recruiting new voices, faces and brains.

“I want to see the committee be more present in the process, both on the community level and the political level,” said Ian Stude, a member of the committee for six years and its incoming chair, in an interview last week. “People who want to cozy up to the beast a little more.”

Vice-chair Heather McCarey is leading the recruiting process for the committee, aiming for a total of 13 members and seven alternates.

“We could be having as many as 10 new people or more,” Stude said.

The committee’s official mission is “to review projects of interest to cyclists and discuss bike issues. The committee advises City Council and bureaus on all bicycle-related matters.”

Inspired by the influence of the Portland Freight Committee, which consists mostly of people whose jobs are freight-related, Stude is especially interested in getting people in Portland’s private bike industry.

“The No. 1 thing that we I think we’re missing from the committee is people who are in the bicycle industry,” Stude said.

But if you don’t pull a paycheck from Chris King Components or SoupCycle, don’t let that stop you — send in an application, or contact McCarey for more information: heathermccarey@gmail.com.

The BAC meets at 6 p.m. on the second Tuesday of every month. Meetings are held in the Lovejoy Room in City Hall at 1221 SW 4th Avenue.

i like that ian has a backpack in that picture, getting ready for school!

…it could be a skydiving parachute too! (A new commute mode…little planned for in Portland.)

It would be great to see someone with an interest in mountain biking on this committee.

Chris, you need to be on this. Not only is your business bike-based, it is freight-related.
On second thought, can you get on the Portland Freight Committee?

I had forgotten how youthful and fresh former chairs looked before the BAC workload and pressure takes its toll (like how US President’s age in office, Obama etc.)…Ian thanks for all your hard work.