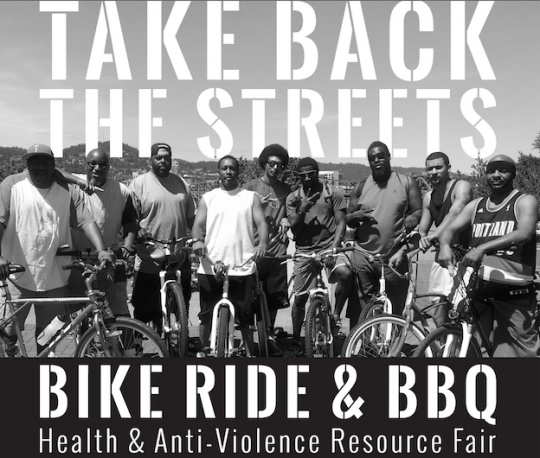 Former gang members want to take back the streets in North Portland and they want to use bicycles to do it.


Following gang-related shootings earlier this summer, a community activist and a former gang member approached the Community Cycling Center with an idea: a mass bike ride to show that the streets belong to everyone.

“Together,” reads a description of the ride, “we have worked to create a powerful bike ride and community event.”

Melinda Musser with the CCC told us via email this morning that, “This collaboration sparked a robust and powerful grassroots movement. After 12 hours of being on Facebook, over 100 people expressed interest in this event.” Now it’s up to 149.

The two men behind this movement are community activist Jason Washington with a group called Brothers Gaining Equality Through Excellence and DeMarcus Preston, a former gang member.

“I’m stepping up as a former gang member. I’ve seen friends and family killed,” said Preston in a statement, “I’ve been lucky enough to make it out and I want to help others do the same.”

The stated goals of this ride and event are to: “Promote peace and understanding by building community,” and to, “Promote a healthy and active lifestyle.”

The ride is on August 24th at 11:00 am. It will start at the Bike Repair Hub in New Columbia (N Trenton and Woolsey) and it will end at Columbia Park. After the ride, there will be a documentary screening (about life after incarceration), guest speakers, an anti-violence resource fair, live music, and a BBQ ($5 a plate, with proceeds going to the Stop the Violence Foundation and others).

And my favorite feature of the ride (as promised in its description on Facebook): “Real talk with one another.”

There will even be 25 bicycles available for the ride on a first-come, first-served basis. Learn more on the Facebook page.

Portland needs more of this.

This is the greatest thing I’ve heard so far today. Portland DOES need more of this. It sounds like it has a good shot at changing some hearts and minds.

Great idea. Even if it changes the mindset of just one individual, then the event was worth it.

This is fantastic. I wish them luck.

Their determination is an encouraging start. More backsides of good people on bikes is more eyes on the street. Not just for this demonstration ride, but on more of a consistent basis, could make a difference. Good picture for the poster.