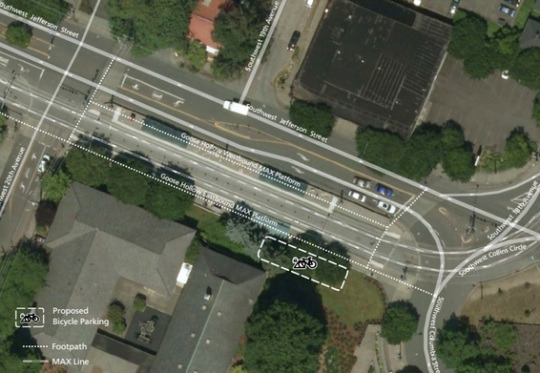 One of the Portland neighborhoods with the lowest rates of car ownership might surprise snooty east-siders: Goose Hollow.

The dense urban neighborhood immediately west of downtown also enjoys terrific access to Washington County thanks to TriMet’s MAX tunnel — and that combination gave a major new bike parking facility proposed there a boost into a list of transportation projects that are about to be funded by coveted state lottery revenue.

The Goose Hollow project will hold 20 to 50 bikes in either a covered or walled-in bike parking facility, vastly increasing bike parking in the area. Today, the station is served by a single bike rack, which probably contributes to the number of people who bring their bikes on the MAX, reducing passenger capacity through the busy tunnel. Too many bikes on MAX has been a tough issue at TriMet for many years. A survey they completed in 2008 said that due to various constraints, their strategy would be to improve bike parking at stations, rather than try and fit more bikes on trains.

As part of the same $1.9 million project, TriMet would add secure parking for 75 bikes at the Beaverton Creek MAX station (the same one where new open-air bike staples were just added) as well as a new trail crossing of the MAX tracks “to connect to a future east-west trail by Tualatin Hills Park and Recreation District and a future north-south Nike trail through the Nike woods property to directly connect to its main campus on SW Jenkins Road.” 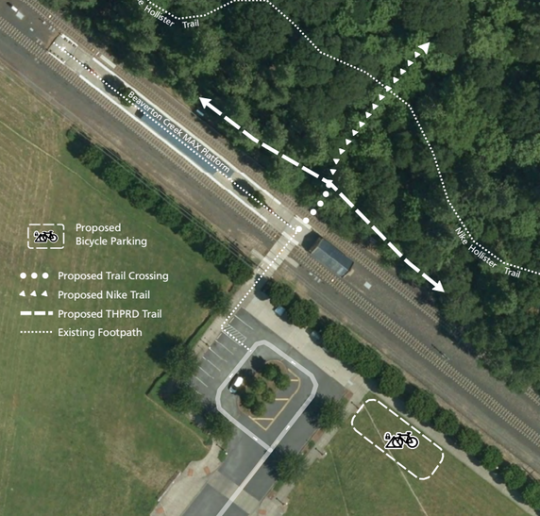 That’s according to the official project description on page 163 of the advance materials (PDF) for this Thursday’s meeting in Salem of the Oregon Transportation Commission. The governor-appointed commission is expected to approve the lottery-funded grant awards, including this one.

The lottery-funded transportation program, known as Connect Oregon, is now in its fifth round of awards. This year, for the first time, bike and pedestrian projects were eligible as well as projects for other modes — a substantial legislative victory for the Bicycle Transportation Alliance.

The Goose Hollow and Beaverton Creek bike improvements actually fall in the “transit” category of the grants. As we reported last month, the other likely winner among Portland-area bike/ped projects is a stretch of the Tualatin River Greenway. (Some local activists are crying foul at several Connect Oregon projects they say are aiding oil train shipments in Oregon. We’re looking into that story now.)

The Goose Hollow project was similar to a recent Portland State University student capstone project (PDF) that envisioned a 45-bike structure at the MAX station there. But TriMet Active Transportation Planner Jeff Owen said Tuesday that the final design might differ from that proposal because it would ultimately be up to the First United Methodist Church, on whose land the new bike parking area would sit.

“We’re just early on in that conversation now,” Owen said. “We don’t know if it’ll be a building with a door that you can walk into or covered parking that you can see through.”

If TriMet, the church and the City of Portland settle on a covered open-air facility, Owen said, TriMet is likely to install security cameras to improve the bikes’ safety.

Asked for a possible date of completion, TriMet’s Owen said they aren’t exactly sure yet. Stay tuned for updates.

1. The enclosed bike parking stations at Beaverton TC and Sunset TC (there may be others) are an unmitigated failure for obvious reasons. Charge for bike parking while car parking is free? C’mon, TriMet, you’re not even trying!

2. TriMet’s strategy of park-your-bike-and-ride just doesn’t work in a transit network where much of the network is in suburban areas with horrible development plans immediately surrounding the stations. Look no further than “Beaverton Central”, that just had a new parking lot put in right up against the few only buildings. These stations are not becoming destinations, but remain waypoints to most peoples’ final commute destination. Thus, most people who don’t want to tie up TWO bikes in their commute NEED to take their bikes on the train.

3. As for Goose Hollow, how about doing something about the criminally negligent bike lane going down Jefferson towards this station? It’s a steep downhill, with a standard narrow lane hard up against a door zone, that ends in a bus stop at the bottom of the hill. Buses block the bike lane not just on scheduled stops, but for extended periods while TriMet drivers takes scheduled breaks. I take the “car” lane on Jeff for my survival, and am nearly every day cursed at by drivers for not using the dangerous bike lane. (I am not a VC, but I will not use poorly designed bike infra if it puts my life at risk.)

Sorry, I love me some good bike parking, but this is not where money needs to be most spent at this particular location. Fix the connecting streets first, please!

I agree that hill is unsafe and I also take the lane there. Plus, you’ve got the tracks at the bottom of the hill to worry about, too.

I agree it’s a poorly designed lane but you must be doing something else if you’re regularly “cursed at” by drivers. There is little difficulty in keeping up with car traffic traveling (the steep) downhill while taking the lane here.

The “criminally negligent” situation is Columbia which doesn’t even a single uphill lane. I wish 18th had facilities as well as I never know whether to take the lane or hug the right curb. The travel lane almost seems wide enough where you could stripe a 5 ft bike lane there.

Chris I
Reply to  peejay

This is the waterfall effect of the city of Portland not properly charging for street parking. Trimet should be charging for car parking at all parking structures (given that each spot built costs about $20,000), but they can’t, because people aren’t going to pay to park at a park and ride when they can hunt for a spot and likely park somewhere for free in Portland (outside of the downtown core, at least).

Boy, have I wanted this for a lot of years: an affordable and secure place to park my bike, as close to Goose Hollow as possible. With this I will be able to ride my bike downtown (often saving 20+ minutes versus the bus) and then take MAX to work without having to deal with my bike on the jam-packed afternoon trains. Yay.

The downhill bike lane on Jefferson is indeed criminal, and I NEVER use it. Always take the lane. What sucks more is the climb up Columbia, with cars speeding around me and the occasional need to jump into the left lane to dodge a parked bus. But for decent bike parking in Goose Hollow, I’ll take it!

Why even take SW Columbia when you could go a few blocks north to Salmon where the hill is much more conducive to cycling?

I can’t hear about Goose Hollow without being reminded of Bud Clark. Here’s an excerpt from his wikipedia page: “Clark is known for his eccentricities. He commuted to work by bicycle…”. Apparently if you commute to work by bicycle you’re ‘eccentric’.

Well, he also exposed himself to art, so there’s that.

I live in Goose Hollow and frequently bring my bike on MAX. It will be nice to hopefully have more room on the train!

Perhaps TriMet could also get the ticket machines and validators at Goose Hollow to work more reliably?

compared to Goose Hollow… it’s the Gresham of Portland…

Do you want to increase bike traffic between downtown Portland and Beaverton/Hillsboro?
Offer free fares from Goose Hollow to the Beaverton transit center for bicyclists.

I’ve often wondered what I would do if I found myself carless on a day when riding the entire distance into town just seemed Herculean (e.g., injured, sick, intense rain, whatever), and without being able to take my bike on MAX (nearly impossible heading into town in the morning, and out of town in the afternoon—hush, reverse commuters!) the choices aren’t appealing. The closest MAX stop to me with secure parking right now is Sunset TC, five miles away. If I left my bike there and took MAX into town, I’d have to switch MAX lines once, then get the street car or walk 10 blocks (this will change when the Orange line is done, then I’d have one MAX change and a fourish-block walk). There just aren’t good options for a mixed transit/bike commute for me unless I can wrestle some project manager or account exec for a bike hanger spot on the train.

As peejay notes, without two bikes, one of which you are willing to leave parked at a MAX stop overnight, the only convenient option for most folks is to take their [one] bike on the train. Now putting a Bike Share station at Goose Hollow? That sucker would likely have some pretty high turnover, else get emptied out by 8 am and filled back up at 6pm…

As far as charging for bike parking right next to free car spaces, I guess I don’t object as much to the $.30 a day (last I checked, I’ve never done it) it costs to lock my bike in a covered cage with fancy racks, but more the hassle of getting a BikeLink card, and this:

“If you use a group parking facility (where lots of bikes are parked in one room), your bike’s security is increased by the fact that we check every new user’s photo ID the first time they access the facility. Our 24 hour operators do this remotely via camera.”

Yeah, yeah, security…cameras everywhere…drivers are also on security cameras… But, they don’t have to produce a photo ID to gain access (granted, this is first-time-only), or remember to bring, then fish out their key card to get into a parking spot. Also, there is no real record of which drivers entered a park-and-ride garage when, but cyclist activity in a bike cage is traceable to the individual. Maybe I’ve just watched too much “24”, but I don’t like it. I would think anyone else who attempts to hold on to the tiny shreds of privacy we have left in the world wouldn’t either.

Ah, crap. Forgot to end my blockquote. You know what I meant.

The first thing you said.

I think there are more employers close to west-side MAX than residences.

Of course Goose Hollow today is a mere remnant of the once thriving PSU student “ghetto” that was gutted in the 70’s for the I-405 and Sunset freeways. Just one of half a dozen close in neighborhoods sacrificed to suburban commuter convenience in the post war era. All were poor, most were minority, and all are now reviving, but held in check on the Robert Moses inspired “freeway loop.” Time to start taking it down! The land needs to be put to better use in the 21st century.

The Goose Hollow bike & ride will be dominated by Westsiders. The highly visible construction will give “interested but concerned” cyclists plenty of time to dust off the old bike and plan their time-saving route. If just 1% of the Westside Commuters taking the train into Portland decide to shorten their “last mile” by a 10-15 minutes, they’ll start keeping a bike in the cage for weekday use and it will be filled to capacity. Ironically, this will not affect the number of bikes or passengers on the train.