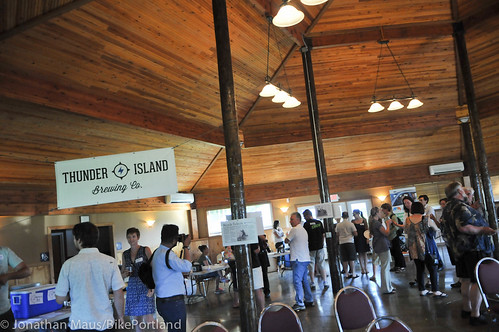 “… There’s no place for all the cars. We’re limited by parking. If we can get more biking out here we can double our business without adding any infrastructure.”
— Tom Cramblett, mayor of Cascade Locks

From a former Portland resident with a penchant for brewing beer and long bike rides to a native who’s now mayor, the small city of Cascade Locks in the Columbia River Gorge is rallying itself around cycling. With an eye toward economic development, it’s an all-hands-on-deck approach that underscores the growing momentum of bicycle tourism across our state.

At the monthly Gorge Green Drinks networking event last night, about two dozen Gorge business owners, agency staffers, and community advocates came together. The topic of the meeting was “Bikes Mean Business”. And in the Gorge, there are stats to back up that claim: A recent study by Dean Runyan & Associates found that in 2013 an estimated 230,000 bicycle trips in the Gorge generated over $21 million in visitor spending.

Dave Lipps, owner of Thunder Island Brewing Company, is doing everything he can to make sure Cascade Locks gets its share of that growing pie. 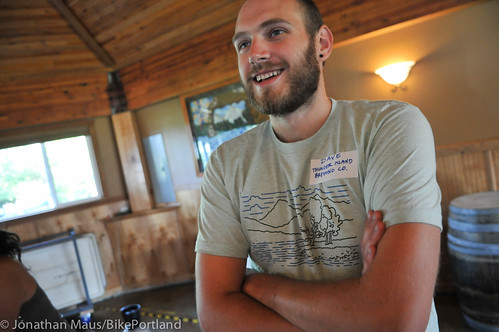 Lipps’ journey to Cascade Locks began in the carport (or what he called the “bike-port”) of his inner northeast Portland home where he built up a sizable clientele for his homemade brews. In 2009 he rode his bike across America and then ventured to New Zealand to do more biking and also look for work. With a sport coat he’d packed into his pannier to do interviews, he found himself with two jobs: assisting a bicycle framebuilder while moonlighting at a brewery.

“Several businesses in this town have changed ownership, and we’re re-thinking everything.”
— Dave Lipps, owner of Thunder Island Brewing Co.

By the time he returned to the states, Lipps began looking for a place to start a brewery of his own. Around the same time in early 2012 a group of Portland State University students launched a project to organize the bike trails in and around Cascade Locks into a tool for economic development. As fate would have it, one of the students was Sara Morrissey, who happened to be the girlfriend of Lipps’ business partner Dan Hynes. “That project is where we first got the hint that Cascade Locks might be the place,” recalled Lipps last night.

Today Lipps, 27, is part of a new wave of business owners in Cascade Locks who want to make the town more bike-friendly. “Several businesses in this town have changed ownership,” he said, “And we’re re-thinking everything.”

Calling it a “trail town that’s ready to boom,” Lipps has planted himself on the local tourism committee and is active in the community at large. He recently won a tourism grant that will pay for 40 new bike racks and he’s opened up a wholesale account with Portland-based distributor Cyclone Bicycle Supply. With the closest bike shop 20 miles away, Lipps plans to sell basic bike parts and accessories at his brewery as well as supply other local businesses with “Bike First Aid Boxes” so they can help riders in need. 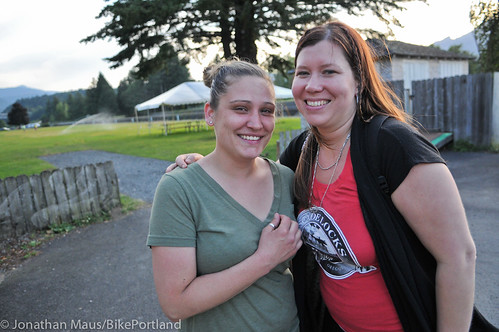 On the other side of town, Suzanne Jackson and Shelley James — the new owners of the Cascade Locks Ale House — are also looking to make their business attractive to bike riders. When Jackson and her staff see biking customers (who are easy to spot with helmets and bike clothes) they ask if they’d like their water bottles filled or if they’d prefer a window seat to keep an eye on their bikes.

“This year we saw tons of cyclists come through. It’s been a huge increase since the new trail went in,” Jackson said. “”We just want them to feel welcome.”

To further capitalize on the bike boom, Cascade Locks is also actively building out its trail offerings. Not only are they at the (current) end of a newly completed section of the Historic Columbia River Highway State Trail, they’re also working on a new, 25-mile network of off-road trails that will turn this town into a mountain biking destination and serve as perfect complement to the existing family-friendly easyCLIMB Trail. 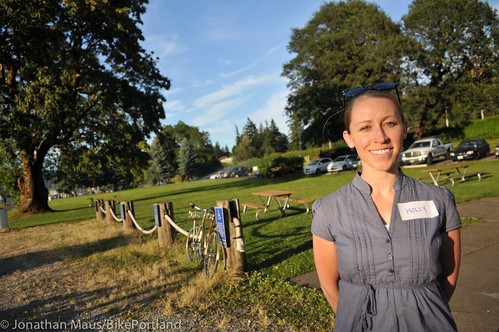 Holly Howell, marketing and development manager for the Portland of Cascade Locks.

Holly Howell, the marketing and development manager for the Port of Cascade Locks, told me last night that her agency has already invested $100,000 into the off-road trail project to pay for necessary federal studies (the trails will be built on U.S. Forest Service land). She sees cycling as the “third wave” of “passionate recreation groups” (after sailors and hikers) who help make Cascade Locks tick. 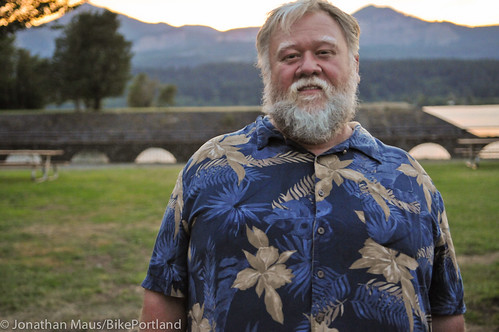 If there’s anyone who keeps Cascade Locks ticking it’s current mayor and elder statesman Tom Cramblett. A lifelong resident of this small town (which is bordered by a national forest and a huge river), Cramblett said one of the main reasons he supports bicycling is simply because there’s simply nowhere to fit more cars. “Out here,” he said, “space is huge to us. This town is nuts on the weekends and there’s no place for all the cars. We’re limited by parking. If we can get more biking out here we can double our business without adding any infrastructure.”

One way Cramblett wants to get more bikes into Cascade Locks is by prohibiting cars on more sections of the Historic Columbia River Highway. “Wouldn’t that be nicer for you guys?” he asked.

A man with a strong connection to the river and the grassy acreage of the town’s marquee public space, Marine Park, Cramblett said he’s even had people encourage him to pave sections of the park to add a parking lot. “So I told them, why don’t we instead put our efforts into getting bikes here?”

And that’s exactly what his town is doing.

— Read more about the Cascade Locks bike boom in this recent article published in the Hood River News.

A well timed article. This weekend a friend and I are riding from PDX to Hood River, with plans for a hearty food/beverage stop in Cascade Locks both ways. I knew about Thunder Island Brewery (they sell insulated growlers, BTW, if you want to get a cold beverage to your campsite), but I’m glad to know the Ale House won’t mind a couple of sweaty folks eating and drinking with them.

Check out the Kiteboarding 4 Cancer (KB4C) event if you make it to Hood River – should be lots of fun going on this weekend.

Love that mayor, he gets it. You cant pave all the green space in the world without effing the world over.

“This town is nuts on the weekends and there’s no place for all the cars. We’re limited by parking. If we can get more biking out here we can double our business without adding any infrastructure”

Now THAT is a refreshing statement from a mayor.

Dave, Dan and the TIB team have put a great deal of energy and effort into developing a community-oriented business that also has a strong outdoor and cycling component. Plus their location is my favorite in the Gorge and the beer is delicious. As a member of the team that developed CCCL, it has been inspiring and exciting to watch TIB and CL move forward and implement various elements from the plan and make waves of change in the Gorge. Congrats to all! And thank you to bikeportland for providing out-of-Portland coverage!

love it! can’t wait to go on more cascade locks trips and spend lots of money!

This mountain bike network could be huge for us here in Portland. If they include some technical trails that cater to more advanced riders, we will be bringing our bikes and dollars en masse. It would be rad to have a place for my four year old (EasyClimb) and I to ride in one day. This would be the largest trail network within 45 minutes of Portland, with easy access to food/beers after. Three cheers for Cascade Locks! They get it. Thank you!

I’m more than satisfied with mountain biking options >45 minutes away already, so I’m sort of indifferent to another drive-to spot. Still, I can see this being a huge boon to Cascade Locks. It would be great if Thunder Island Brewing could expand into quality gastropub fare or someone in town bump up their standards a little bit. Cascade Locks would certainly get my business if they can match the current 1-stop-shop Hood River experience. MTBing, craft beer, and quality food is the making of a perfect day.

It is so great to see Cascade Locks blooming with new development and entrepreneurs! Thunder Island Brewing is a gem indeed with great beers and great owners.

Rode the Easy Climb trail with my 9 year old and my 4 year old on a tag-along the other weekend. Had the whole thing to ourselves surprisingly. we had a great time other than a couple of blackberry scratches. Best mtn bike trail for beginners and kids around. Thanks Cascade Locks!

Of course it is. duh. fixed it. Thanks Mr. Case.