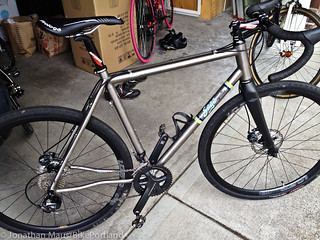 From a garage and a small storage space in Beaverton, David Rosen has launched a new bike company: Sage Cycles.

Rosen, 41, created the brand in 2012 after he saw a niche in the market for bikes made out of titanium. “Ti”, as it’s known in the industry, is a great material for bikes because it’s light, very durable, and offers a ride that can be the perfect blend of stiffness and compliance. The vast majority of bikes you see around town or at the races are carbon, aluminum, or steel. But ti, mostly because of its higher cost, is relatively rare.


A few years ago, Rosen was in the market for a new bike (he’s an active racer who’s competed in road, cyclocross, and mountain biking events). He wanted something different and something that would be tough enough to withstand his rigorous riding (he’s broken two carbon frames and often races in the “Clydesdale” class which is open only to riders 200+ pounds). “I didn’t want something that would be thrown away because the material had a short shelf life, or because the ‘fashion trend of the day’ had come and gone. And carbon is so commonplace, you’re even seeing it on commuters,” he said, as we rode through the rural backroads south of his home near Cooper Mountain Nature Park last weekend. One of his teammates at the time had a company that was importing titanium frames from China, so Rosen ordered one up. “I loved that bike,” he recalled, “it was perfect.” 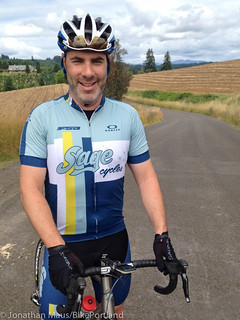 Like many of us bike nerds Rosen’s age, he came to love cycling through early romances with Mountain Bike Action and Dirt Rag magazines. It was in those publications that he first dreamed of owning a titanium bike. “I always wanted a Moots,” he recalled, but the price (which, for high-end brands like Moots or Seven can easily reach $6-7,000) always kept that dream out of reach.

Once he realized you could import titanium frames from China, then build them up with carefully selected parts and sell them for thousands less, Rosen’s wheels started turning. Not long after he ordered that first frame from his friend, Rosen had hatched a business plan and Sage Cycles was born. “The idea was to do a high-performance bike at a lower price point that would serve a portion of the community that wanted to get into titanium but couldn’t afford a Moots.”

Because his frames were coming from China, Rosen initially partnered up with Portland-based Ti Cycles to do thorough quality-control on each frame that came in. He kept Ti Cycles busy because quality problems were relatively common on his first frame orders. Because of Ti Cycles’ expertise, most of the frames could be fixed (the others would be shipped back overseas), but having to do QC just added to the price of the China-sourced frames. Combine that with shipping costs, communication barriers, and the rising price of Chinese-made products in general (because of increasing labor prices and the strong yuan), and suddenly the big savings just weren’t there.

Another issue Rosen experienced with China-made frames was that potential dealers cooled on the idea of selling the brand once they realized it wasn’t U.S. made. “They loved the concept and the bikes in general, but I would lose them because of the China thing.” 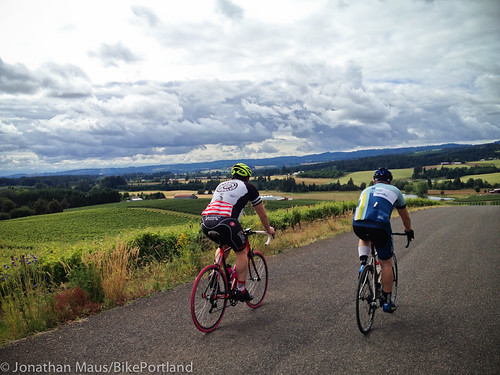 Rosen’s testing grounds are the gorgeous backroads of Forest Grove. 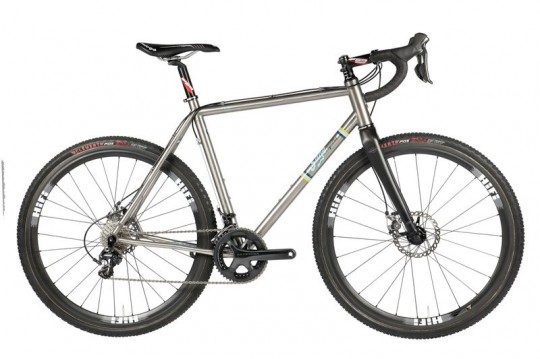 Rosen eventually bought out his partner due to creative differences and began looking for American factory that could build his frames. He settled on Tennessee-based Lynskey, a highly-respected name in titanium. And once all was said and done, the U.S. made Sage frames cost only about $200-300 more than the ones from China. “It just makes so much more sense to go this direction,” Rosen said, especially when thinking about serving a customer who’s already in the market for a $3,500-$4,000 bike.

The switch from China to the U.S. illustrates larger trends in the potential for domestic bike manufacturing and it has also had a major impact on Rosen’s business.

Since he began sourcing frames from Tennessee, Rosen now wants to make the bike as U.S.-centric as possible. “Now I’m embracing it,” he said.

“Being able to switch production from Asia to the US was a big step as it allowed us to look for different ways to tell the Made In USA story. As a small brand, to be able to say that our frames are the result of work done in four states (Oregon, Tennessee, North Carolina, and Rhode Island) is something I am really proud of and never thought I would be able to say.”

Rosen’s focus is on the burgeoning cyclocross market. Last year he had a booth at the local races where he offered free demo rides of his bikes. He plans to do the same this year. In addition to racing and running this company on his own, he’ll be out there talking up his bikes to whoever will listen. It’s a big job, but Rosen doesn’t seem deterred. “The main lesson I’ve learned from building Sage Cycles is that if you have a vision for something, you alone must see it through to the end. Some people may help you achieve that goal while others may slow your progress down, but ultimately the success or failure of that vision rests on your shoulders.”

— Learn more at SageTitanium.com and read this review of the bikes via the Bicycle Paper.

I believe “strong yen” should be “strong yuan,” no?

Yep. My mistake dan. Thanks. Fixed it.

So I’m confused, so the frames are all being outsourced. Is Sage just responsible for the design and build?

I’ve always assumed the Ti market has gone way down hill since Litespeed kind of died off.

That’s right. Sage does the design, build, puts on the decals, and then does all the marketing/sales of course.

oh I’m not doubting there aren’t Ti bikes out there. You just don’t seem to see as many as you did when Ti was the really hot thing in the 90s. And I guess your comment contradicts a quote in the article: “he saw a niche in the market for bikes made out of titanium”. I guess I’m really just asking with all the companies you mentioned, is there really niche not being met?

I’m not sure of how much of a niche there is. I’m not wealthy, nor am I a racer, but I could see myself dropping the coin it takes to get a Ti mountain hard tail frame because they do last forever. That’s a big consideration for a frame as far as I’m concerned. The people who already own or will soon own a Ti bike have many thousands of dollars to drop on a bike, and having a frame with some regional roots might tug at their heart strings enough to sway them. And if you look at the absurd (and personally, welcome) array of different biking niches, I’d see opportunity anywhere and everywhere if I’m a manufacturer. You just have to set yourself apart in some way, and a Ti frame, though available from several sources, is still novel and offers properties that aren’t offered by other frames.

Not to mention Vertigo and TiCycles right here in Portland.

These bikes are built in Tennessee by Lynskey who (I think) builds in the the Lightspeed factory there. A price check shows these bikes are not any cheaper than Lynskey’s or Moots ( I love my Moots). Still, it’s nice to have more choice, but support Ti cycles if you want to keep it truly local. I used to have an early Ti cycles bike and it was pretty sweet.

Lynskey is not made in the same factory as Lightspeed. They are two separate companies. Though they were both started by the same guy and both based in Tennessee.

Can someone explain the reason for squiggly chain stays? Is it just ‘sexy’ or is there more physical reason?

Heel and chainring clearance come to mind. It just ends up being sexy.

was carless
Reply to  DNP

Room to clear the crankset, right?

Thanks! (and was carless, too) I like it even better knowing there’s a reason for it.

The real reason that Ti frames so commonly have curved stays is that titanium suffers from much great heat distortion than other metals. So when you use straight stays things end up looking bent (or at least not straight). The curvy rear end is mostly there to mask that.

What about the seat stays? How do they stay straight despite the heat?

I’ve seen his bikes and they looked great, good to here that they are now US sourced.

You clearly don’t read Outside magazine……
Their choice for an “entry level” bike to “try out cyclocross last year” was about $4500. I just had to laugh reading that. One of the main reasons I’m dumping my subscription.
“affordable” definitely is a relative term.

I have several $6,000+ bikes (Moots, Seven, Co-Motion) and would love to add the Sage to my stable. I believe that if I’m spending that much money on a bike, it better be made by craftsmen and women here in the USA. I’m sick of the $1500-$3000 bikes out there that are made in Taiwan or China (think Surly, Trek, Bianchi)…that is just insane and really sickens me.

I have no problem buying quality bike components made in Taiwan. Taiwanese workers are typically better compensated than factory workers in the USA and have a much better social safety net. Ditto for Korean and Japanese workers.

I would be interested in seeing updated info on the environmental impact of titanium manufacture. Anyone?

We have got to stop buying products produced in China. Fortunately we are getting more and more choices to allow us to do just that. If it costs more for a bike and components, so be it.

Well, I’ve never paid more than $800 for a bicycle, so I’m likely not the target audience. That said, why do we have to stop buying products produced in China?

Because we are supporting unfair business practices (the Chinese government subsidizes their factories by tens of billions of dollars) and helping bolster a communist government that is now trying to amass the largest army in the world. Oh, and the environmental thing too.

Another angle would be to not continually buy new bikes every few years unless your old ones are completely destroyed. Then you’re not really buying anything new. Bikes can last a long time (even with heavy use).

That’s what my therapist (and my wife) keep telling me…