PedalPalooza planner: 9 rides worth checking out for June 9-13 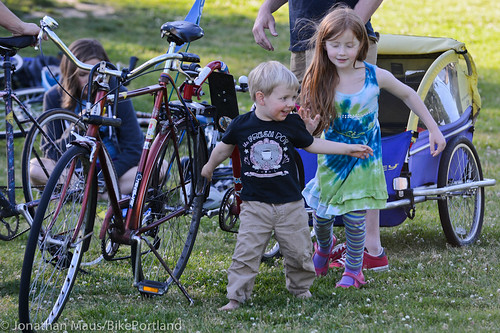 Welcome to the first installment of the 2014 PedalPalooza planner. Each of the next three Saturday mornings, we’ll be highlighting some of the most promising or unusual rides from Portland’s summer bike festival.

Saturday June 7, 2:15pm – 4:15pm. A 10-mile meander through North Portland to check out a bunch of huge, awesome-looking old trees.

Saturday June 7, 5pm. Slip on your fancy fabric footwear to say farewell to a five-year PedalPalooza institution with one last round of games and prizes that hits local specialty sock retailers Sock Dreams and Sock it to Me. Led by “Ladies of the Sock” Kristin Bott and Steph Routh.

Sunday June 8, 4:00pm – 5:30pm Of course I put my own ride on here. Kicking off BikePortland’s week of reporting from East Portland, we’ll take a trip down the bike lanes of 122nd Avenue and talk about the ways a frequent-service bus line and a pair of protected bike lanes could turn one of the city’s most important arteries into an alternate universe.

Tuesday June 10, 6 pm. Erin and Alex lead “a celebration of emo music: especially the stuff that was popular in the mid 2000s when I was in high school. … Singing along and dressing the part encouraged.”

Tuesday June 10, 7:45 pm. All riders should bring a portable FM radio with headphones. The plan is to totally rock out together while listening to KBOO 90.7’s disco show, but nobody else around will know what’s going on. (See link for tips on finding a radio.)

Thursday June 12, 8:30 pm. If you ever wondered what the original WNBR was like, this Thursday night is the one for you. Plus it’s timed to the lunar cycle.

Friday June 13, 6 pm. Anyone “interested in Afro-Brazilian culture and movement” is invited to this tour of various capoeira hubs around the city.

And Bowie Vs Prince on June 13th at 7PM, of course. Team Bowie starts at The Fields park, Team Prince starts at Sewallcrest Park!

Dogs on Bikes Ride – Puppy Palooza! June 23rd at 6:30PM. Adorable dogs on bikes parade, what could be better. Meet at Meat on E Burnside.