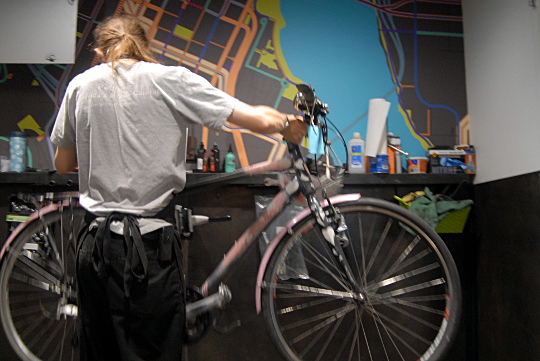 Tech firm New Relic hires a mechanic to visit its Portland engineering headquarters and give free bike tuneups to its commuters.
(Photos by M.Andersen/BikePortland)

In 2012, one of Portland’s fastest-growing employers told the managers of Oregon’s biggest office building that it would walk away from any lease offer that didn’t allow employees to bring their bikes up to the 28th floor office.

The company, software performance management startup New Relic, got its way. Two years later, its 180 employees in downtown Portland’s U.S. Bancorp Tower are enjoying the benefits: the most attractive commercial bike parking in the city and a workplace where bike-commuting is about four times more common than driving.

New Relic also seems to have kicked off a new local trend, the Portland tech scene’s version of Silicon Valley’s on-site laundry services and all-you-can-eat buffets: hiring a bike mechanic to come by the office for free on-site tuneups while the bikes’ owners are at work.

“There’s nine people signed up today, and a dozen bikes that have been tagged,” New Relic’s guest mechanic, Darin Wick of Pedal Bike Tours, said Thursday as he hurried to pump tires and tighten cables for many of the 37 bicycles hanging, leaning or (in one case) sitting neatly folded in the company’s 1,000-square-foot bike parking area.

Photo by New Relic. The company’s bike amenities are up for a People’s Choice award at Saturday’s Alice Awards banquet and ceremony by the Bicycle Transportation Alliance.

Wick comes to New Relic’s office once every three weeks. The company pays Pedal Bike Tours $40 per tuneup, of which each bike’s owners end up paying about $8 in additional taxes. That’s because bike maintenance isn’t recognized by the IRS as a fringe benefit.

“I keep joking that I ought to bring in bikes and get them tuned up, and charge people $10 off the street,” New Relic software engineer Jonathan Thurman said.

New Relic’s parking area, a line of wood-trimmed metal slabs with affixed hooks isn’t physically beautiful — it’s a just storage area, after all — but, sitting just to the right of the office’s main entrance, it’s arresting. Then there are the details: a bike map of downtown Portland painted on the ceiling above the in-house bike repair workstation, the sign that references Portland’s annual Bunny on a Bike Ride, a shoe-drying rack that during the winter had inserts with built-in heating elements, a rack of personalized shower bags hanging in the adjoining locker room, a wall of rubber coat-hooks that you eventually realize are handlebar grips. 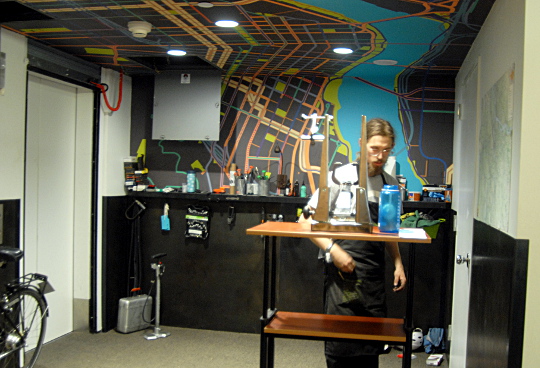 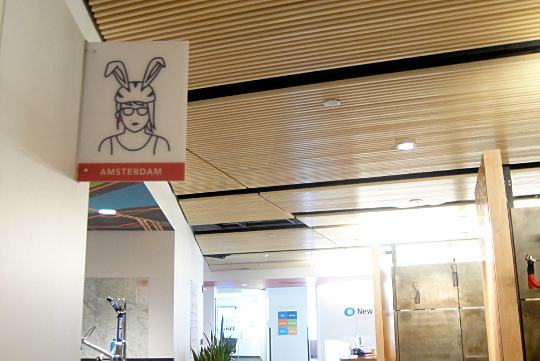 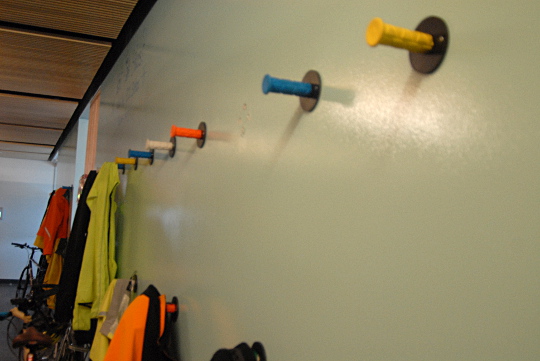 In any case, it’s working.

Asked how many of New Relic’s 180 local employees drive to work, executive assistant and office manager Mary Cameron began ticking off names on her fingers with the help of two colleagues.

They made it to six before getting stuck.

Next month, New Relic will expand into the 29th floor of the big pink office tower, adding room for more than 100 more employees and another 800 square feet of in-office bike parking space. It comes out to about 10 percent of the firm’s total office lease, enough for a few dozen employees to set up desks if the company had chosen to use the office tower’s normal bike parking area in its underground garage.

But the unwelcoming, remote space outside the office wouldn’t fit New Relic’s culture of bike-friendliness, said Jesse Dearing, a software engineer who moved to Portland from Dallas in 2012 to join New Relic and started bike commuting as soon as he realized how many of his co-workers were doing it. 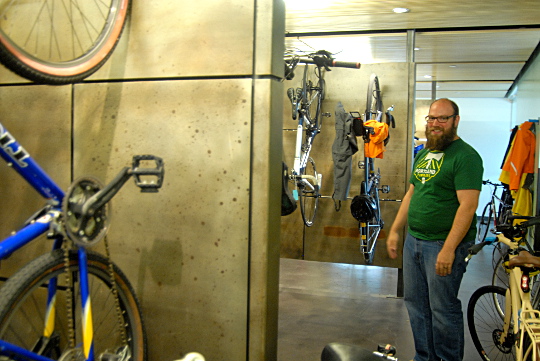 Jesse Dearing started bike commuting and is now a hub of the company’s biking community.

“It’s contagious,” he said. And a recruiting tool, too: “Whenever we bring people in for an interview and they see all the bikes, it’s really impressive.”

At the advice of a co-worker, Dearing sold the heavy, undersized bike he’d brought with him from Texas and bought a Surly Crosscheck from City Bikes on Southeast Ankeny. After he started bike-commuting daily, he moved from Parkrose to Montavilla, dropped 30 pounds and became one of the company’s lead evangelists for biking.

Before that, Dearing had ridden TriMet, which is the most common way for employees to get to New Relic. Dearing decided to make the jump to biking when it was time to renew his transit pass — a benefit that, it’s worth noting, New Relic chooses not to subsidize, other than letting employees buy them with pretax income.

Then again, it doesn’t subsidize employee auto parking costs, either.

“You have to pick and choose,” Cameron said. “And we chose bikes.”

Being able to buy your pass with pre tax dollars is a really nice benefit, and one that doesn’t really take that much effort for a company to do and costs them nothing beyond the administrative time. I wish my company would do it, but I wasn’t able to convince them that it was worth their admins time and she didn’t really want to do it so we don’t have it.

Props to New Relic for pushing for this. Not all building owners downtown are understanding of the desire to accomodate bikes, but what a great place _to_ accomodate them. I know of another tech firm downtown, Jama, that had complained about their previous location and the stickler landlords that dug their heels in against allowing bikes on premises. Hopefully the New Relic story will serve as an example to other firms not only of what can be done with a strong will and a little pushback, but also to demonstrate that the desire is there!

“And a recruiting tool too…”. Indeed.

I’m impressed New Relic managed to do this – I remember when I worked in the US Bancorp Tower that bicycles were not allowed in the building, period. No exceptions. Nice to see a change.

The building owners are actually still ****s about this. But New Relic has enough clout to shush them when they complain about it. with other companies going into the building that also have a large % of cyclists this will only be pushed on the landlords that have traditionally been fussy about this.

Is that a Spanglish headline?

That is SO COOL! The idea of having on site bike tune-ups is just brilliant. I think this keeps a lot of employees ‘en selle’ because the bike is easier to ride and they don’t have to forego maintenance because all the bike shops are closed when they get off work.

I’d love to try to replicate this where I work…

I miss this part of my job. 🙁 Great to see New Relic getting some bikeportland coverage though! They are a great bunch of people and their bike parking story is an example for others to follow! Keep it up guys!

Also, they simply make a sweet, sweet kickass product. Definitely a highlight of Portland’s tech scene even without the bike culture.

The chief reason shops in North America sell bicycles with chain-flipping transmissions to commuters is to bring in profitable repeat shop visits. Jonathan’s photo record of his trip to Copenhagen and Amsterdam last year showed zero–nada–derailleurs on commuter bikes.

Those mechanical monstrosities were designed for the exigencies of road-racing: climbing and descending hideous mountain passes; conserving energy while riding at speed in the peleton. They require expert daily maintenance to function as designed. For city biking they are worse than useless: hard to shift; detracting from attention to traffic; difficult to maintain; deleterious to stability of the rear wheel; perennially clogged with road-oil-rubber gunk. Got to be thoroughly worked-over at least every week!

Do riders with 27-speed chain-flipping transmissions get to work 9 times faster than those with 3-speed hub gears?

Do riders with 27-speed chain-flipping transmissions get to work 27 times faster than those with one-speed fixies?

Assuming that the folder was a Brompton, its owner would be well advised not to let a tune-up artist anywhere near it. Keep it under the desk. Lube the chain and pump-up the tires once a week.

In the words of the excellent Robert Hurst: commute with fear and with joy! And economy.

“Wake up”? What makes you so high and mighty? FWIW in my experience, the two bikes I have with derailleurs have never needed professional work. My nexus 8 is about to be replaced for the second time in three years. I love riding all three and you better believe they can take seattle’s hills far better than a three speed or (hah) a fixie. If you can’t figure out how to shift in traffic or keep your gear clean don’t blame the bike.

What’s next? Shoes? Innovation be damned! These shoes don’t help me walk any faster than anyone else…

Of course life IS about how I compare with others…

If that has been your experience with derailleurs, then you need to consider that you might be doing it wrong.

My beater MTB commuter gets ridden (somewhat) hard and put away wet, often with a dirty drivetrain. It gets lube every 2 months or so and a degreasing maybe once a year and that’s pretty much it. I get 5+ years out of a drivetrain with year round commuting and maybe a bit of touring thrown in there.

I’m fairly certain Hurst is not categorically opposed to derailers. Like all bike technology they have advantages and disadvantages. I for one very much enjoy crisp shifting under load and the ability to maintain a high cadence in both the dinner plate and the salad plate. In my experience, IGHs feel like they are lubricated with molasses and shift with the alacrity of a banana slug. And the fact that most IGH hubs weigh more than my commuter frames pretty much rules them out for my utilitarian cycling. I guess they would work well on my 35 lb shopping bike — the one with a 90s era deore lx derailer that I maintain myself for free.

And since we are quoting Mr Hurst I though I’d contribute one of my favorites:

Road rash is a precious gift. Road rash is your friend. Bask in it, appreciate it, love it. Above all, learn from it.

Get out of the stone age. Welcome to America where we have HILLS. I don’t want a 30 pound dutch bike.

That’s why mine are electronic.

My commute is from Beaverton — over the Sylvan Hill. I suspect I have a few more terrain issues on my way to work than most of the Dutch. … just sayin’ …

Wow. I’ve been known to deliver a dubious screed or two, and to each his own, but to call derailleur gearing worse than useless and an evil star-chamber conspiracy is really something.

I applaud you, sir!

Hope that wasn’t a dig at Google that Apple really deserves – they run way more buses and don’t have half the bike commuters or bike-borrowing infrastructure that Google has (plus they stole a very popular bike lane to build a gigantic building nearly the size of Jobs’ ego). Just saying…

Thanks for the subtle bike-check, Mike 🙂

I think this should be a standard in the US regardless of where you work. Ive parked my bike in cubes,computer rooms, hidden closets.. name it don’t feel this is a part of the bike scene tho..

I am pretty sure that Portland’s answer to the Google (or Apple) bus is the Intel bus.

Can we start a thread off this called maxed out.. re: max train per ppl limit. ok sorry got on a tangent with the bus post. I’m from the bay so why not do little cause n effect.