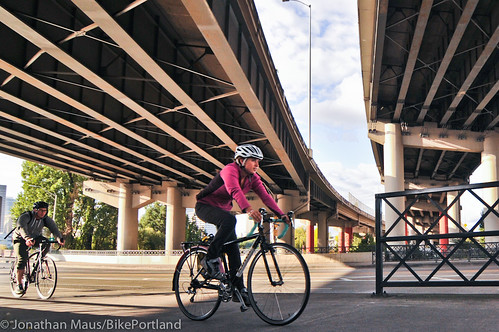 Bike traffic on the Hawthorne Bridge as it goes under I-5.
(Photo by J. Maus/BikePortland)

With well over 15,000 bicycle trips daily (according to 2012 counts), Multnomah County’s bridges play a major role in central Portland’s bicycle transportation network. You might not realize it, but the County owns, operates and manages six of the seven major downtown bridges: the Sauvie Island, Broadway, Burnside, Morrison, Hawthorne and Sellwood spans. Three (soon to be four) of those six bridges have a separated path for bicycle traffic and the Hawthorne is widely considered one of the busiest bicycle bridges in America.

Today the County announced they’re launching an effort to update their 20-year, Willamette River Bridges Capital Improvement Plan (CIP) and taking a “thorough and comprehensive look at the needs of this critical transportation infrastructure.”

To say it will be important for people who care about bicycling to raise their voices and get involved in this process would be an understatement.

A statement released today said, “The county wants to know which bridge improvements are most important to the public as it develops a list of possible bridge improvements for public review later this year… With limited available funding for major bridge upgrades or replacements, there are questions to be answered about which improvements to plan for and prioritize.”

To garner feedback, they’ve also released a short online survey and there will be a “Bridge Summit” next Thursday (3/20). That meeting will be held from 6 to 8 p.m. in Room 315 of the Multnomah Building at 501 SE Hawthorne Blvd.

Being such key arteries for bicycling, you would assume bike traffic would be a major starting point in the county’s plans. However, as you can from the graphic pulled from the Bridges CIP Fact Sheet (PDF), bicycling isn’t mentioned under the “Traffic Operations” category on a list of “performance attributes” the county is using to evaluate priorities. (Bicycles do appear under the “Livable Community” category.)

Consider attending the meeting next week, take the online survey, and stay tuned for other opportunities for feedback. This planning process will continue throughout the year and a public review of the updated CIP is expected this fall.

You can learn more at Multco.us/bridgeplan.

The survey is so explicitly geared towards business motor vehicle and freight concerns that I’m at a loss as to how to fill it out. So here’s what I put in box 5:

In case the county isn’t actually planning to ask individual bridge users what OUR priorities are, here are mine as a daily commuter across the Willamette:

1. Include bikes and walking in your plans and statements about your plans.
2. Safety for non-motorized users of bridges – separation from high-speed motorized traffic, safe surfaces, and access.

These concerns CLEARLY belong under the Livable Community, Social Justice, Sustainability, and User Safety headings in question 6 below, so I’m ticking those boxes with my concerns in mind.

“The survey is so explicitly geared towards business, motor vehicle, and freight concerns that I’m at a loss as to how to fill it out.”

Wow, you can say that again. Seems like they definitely don’t want input from the general public.

How so? There’s almost nothing in that survey which is mode-specific, and only one of the questions has pre-determined responses.

The factsheet says the 4 county run bridges “are also highly susceptible to failing in the event of a major earthquake.” My understanding is that Burnside and Morrison are most at risk to be taken out by soil liquefaction of the West Bank. I wonder how much this discussion is really talking about the $$ to keep any of the bridges working after the 9.2 quake (the Duniway PLMR and Sellwood excepted).
Heck, wouldn’t be to crazy to foresee the new bridge being open to private auto traffic on an emergency basis for a decade while we recover and rebuild.

A strangely framed set of questions indeed. It doesn’t look to me like the survey was vetted very carefully. Except for questions 5 & 6 I’m not sure what usable insights the survey questions are expected to reveal to Multnomah County.
But I appreciate you drawing our attention to this, Jonathan.

the only one I’m aware of with a separated path for bicycles is the Morrison, and not the entire path is bicycle-only… actually, I’m not sure if any part of that path is bicycle-only… possibly the portion on the moving parts of the bridge where the grade is separate from the sidewalk, but I don’t remember any markings stating that the road portion is bike-only and the sidewalk is ped-only…

lower the speed limits on the bridges!

By the way, I’d like a footbridge on the Morrison Bridge that’s at the same level as Waterfront Park / the Esplanade, kind of like the footbridge on the Steel Bridge. Is this the place to go to ask for that? 🙂

My 3 cents for the global strategy….push for conversion of the outer lane on the Hawthorne to bike use and the sidewalk to foot traffic (“each mode to have their lane!” and focus the funding on this as #1 priority.

Jonathan – I think you need to expand the screen shot from the CIP Fact Sheet. Bicycles are listed under the “Livable Community” performance attribute. The way your article reads one could conclude that bicycles are not listed at all when in fact they are. Historically bicycles have not been included with “Traffic Operations” and I agree that they should be, especially in Portland where they are so prevalent, but I think your reporting is misleading in that you infer that Multnomah County doesn’t care about bicycles. Not true.

Regarding the survey I agree completely that it sucks. Not sure who the intended audience is but I believe it will be refined as stakeholders are identified throughout the CIP process.

My point is that bicycles are a mode of traffic. When they are categorized under buzzwords like “livability” “sustainability” “alternative” “multimodal community” and “green” this and that… they are treated very differently than the real modes of transport like cars and trucks. It’s a red flag in my opinion. And I agree that the County definitely isn’t anti-bike. It’s not my intention to convey that idea… I’m just trying to put out a cautionary note about why it will be very important for people who think bicycling belongs on the same level as driving and freight movement to show up and make sure their voices are heard in this process.

In that vein, and referring specifically to this part:

“bicycling isn’t mentioned under the “Traffic Operations” category on a list of “performance attributes” the county is using to evaluate priorities. ”

We specifically called that to the county’s attention at last Wednesday’s Bike/Ped advisory committee meeting, and I expect that there will be some attention given to that particular performance attribute.

That photo is beautiful!

Agree, but I’d like to see more visible clothing on the second rider.

no law requires high-vis clothing and I certainly hope they never pass one.

Even if they did, a lack of visible clothing does not relieve other road users of the responsibility to take due care. Striking a poorly-visible rider isn’t the fault of that rider, it means that the person/vehicle striking them either has inadequate lights, wasn’t paying attention, or was unable to properly navigate through existing conditions.

I’m getting unreasonably excited about this event.

I was at the meeting. For myself, I had to wonder at the real purpose of such a meeting in an obscure conference room in a deserted County building. Is this just so they can say that they asked the public’s opinion, or are they really interested in what we have to say? If they are interested, they need to do a much better job of getting people to the meeting. The folks running it were very nice though, if you have suggestions, definitely take their survey.

Paul
Agree, but I’d like to see more visible clothing on the second rider.
Recommended 0

What is this, the nanny-state police? Where is the thumbs down button?!