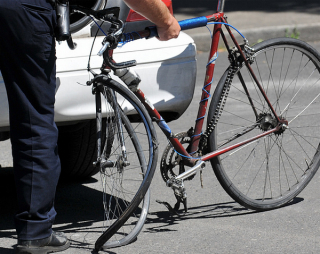 Now what?
(Photo by J. Maus/BikePortland)

(Publisher’s Note: We’ve split this article into two parts because Ray is an authority on this topic and he gets into some important details. Come back tomorrow for the finale. Also worth mentioning is that Ray’s firm, Swanson, Thomas, Coon & Newton, is a BikePortland advertiser and this column is part of our partnership. — Jonathan)

Sometimes it’s tough to get fair treatment when a collision results in property damage but no personal injury. While it’s always better not to have to deal with a physical injury, there is not enough money involved from the contingent fee (1/3) on a property damage case for most lawyers to even justify opening a file, so most riders end up representing themselves. If you are going to go it alone it helps to know the lay of the land before you start. This article contains an overview of the law of property damage and some tips on how to get a fair amount for your damaged ride.

Fortunately, most bicycle collisions do not result in personal injuries. Instead, wheels get bent, helmets scraped and, if the accident is the motorist’s fault, a “property damage” claim is made against an insurance company. For bicyclists, property damage claims can be frustrating because they typically have little or no experience in legal matters and find themselves advocating for damages with experienced claims adjusters. Since the amount involved is usually small, the bicyclist ends up appealing to the claims adjuster’s sense of fairness. Most claims adjusters are not experienced riders and they are frequently shocked by the costs of bicycle repair and parts.

Typical shared fault scenarios include collisions that result from multiple factors, like when a rider fails to exercise “due care” after a motorist makes a driving mistake, such as when a rider panics and crashes after being cut off by a motorist when if the rider had done nothing there would have been no contact or impact.

Since the claims adjuster’s job is to pay as little as possible on a claim, any fault arguably attributable to the bicyclist will be pointed out as a reason to reduce the amount paid. It is essential during these discussions that a bicyclist know the basic Rules of the Road. If possible, be prepared to cite actual Oregon Revised Statute (ORS) numbers.

III. Diminution in Value – The Law of Property Damage

The law relating to property damage claims is technical. Many people believe that they should receive the amount of money they will need to replace their damaged property. Unfortunately, that is not the law. Instead, the bicyclist is entitled to the amount of money equal to the difference between the fair market value of the property immediately before, and immediately after, the occurrence. This is called the “diminution in property value”. Bicycles depreciate rapidly and often the market value of a used bicycle is considerably less than its original purchase price. In order to establish market value, it is best to take your bicycle to a bike shop and get the following estimates:

Frequently, bicycles have little or no salvage value. If you have a particular attachment to some of the components, such as that Terry saddle or that wonderful old Campagnolo crankset, let the adjuster know and they will frequently be willing to let you have these parts. It has been my experience that the adjuster will usually recognize that a bike has no salvage value and allow you to keep the damaged bike if it is indeed totaled. On the other hand, if the bicycle can be fixed, it is up to you whether you want to fix the bike or not. You are not entitled to receive more money because your bicycle had a particularly high sentimental value. However, if your bicycle was a rare bicycle, and had an unusually high monetary value, you are entitled to receive that greater value if it is damaged or destroyed.

Remember, the diminution in value of the bicycle may be much less than it would actually take to fix the bike. The law states that the person responsible for the damage need only pay the loss in value, not the cost of repair.

IV. The Statute of Limitations

The Oregon statute of limitations for property damage claims caused by negligence is two years unless the defendant is an agent for a public entity, in which case written notice of a claim must be provided to the appropriate authority within 180 days after the accident. In serious injury cases, it can be a year or more before the person has recovered enough to know what if any permanent physical impairments may have resulted; however, property damage claims can be resolved immediately after the collision. There is no tactical reason to wait to resolve the property damage claim, and if a bicyclist also suffered physical injuries any release of claims signed by the rider can be limited to property damage only so that the personal injuries may be pursued at a later time within the statute of limitations.

— Come back tomorrow for part two.

” For bicyclists, property damage claims can be frustrating because they typically have little or no experience in legal matters and find themselves advocating for damages with experienced claims adjusters. ”

Whether driving or riding you’re at a disadvantage with a claims adjuster. They work for the insurance company not for you.

Always get your own estimate of damages before accepting any payout. That means going to your mechanic, whether at the bike shop or car repair shop.

Also your bike is covered by your home owners or renters insurance. Have your insurance company stand up for your property.

Meh, The problem with the homeowners or renters insurance is that they usually have a motor vehicle exclusion for damage to insured property. So, if your bike is stolen from your back porch, or a tree falls on it, it’s covered, but if it is hit by a car it isn’t.

One thing to mention… The Bike Gallery charges for the inspection. In my own case, it was well worth it. Since the bike was operable before the crash, and not after the crash, the inspection cost was covered in full by the insurer. Things like custom detailing (reflective paint/tape), pedals, wheels, tires, etc. can be documented and help bolster your chances at getting fair compensation.

Also, you can ask to keep the damaged parts if the insurer is agreeable. Scuffed up seats and other parts are worth next to nothing in resale value, but may still be reusable.

Not that anyone should wait that long, but I think the statute of limitations for actions where the sole damage is to personal property is six years under ORS 12.080(4).

Babygorilla, I think ORS 12.080 is for contractual matters, not tort matters. ORS 12.110 sets the statute of limitations on tort matters at two years.

typo: “2 year statue of limitations, or notice required within 180 days if against a public entity;”

should be “statute of limitations”

I was rear-ended by a car and my bike was totaled about a year ago. Only injury was a bruised shin. Getting settled up was much easier than this
post implies about the process. In my case, I snapped photos of the bike, the driver, her car, and her insurance documents right at the scene. No police were called. I filled out an accident report from the state of Oregon website and sent it and my photos to the driver’s insurance company (Geico). The adjuster was very friendly and told me that the driver was not responding to her requests to verify my story, so she just told me to get a receipt for the replacement for the bike. My bike was a 70’s LeTour Frankenstein commuter special made of parts I’d accumulated over the years. Citybikes wrote up a quote for a new equivalent replacement for $750. I sent the adjuster the quote and mentioned that it didn’t include the rack but I thought I could salvage the old one. She said, “OK then let’s call it $900.” I got a check a few days later. Citybikes recycled the wrecked frame and bought the salvageable components for $200. So within a week I had $1100 to use to replace the bike.

Amen to that. In my experience, they are not *at all* interested in ‘fair’. They are interested only in 1. Minimizing what they pay out, and 2. Making it easy for themselves. Sometimes #2 means they pay a fair amount, but you have to make that the easy choice by having lots of ammo on your side- making sure they know it.

What about damage to carbon frames? Its often difficult to detect.

I was in a right hook crash last year, filed 2 insurance claims, one on my auto (just in case the driver fought my claim) and the other with the drivers insurance. I got an estimate for repairs to my bike and the drivers insurance paid it. I also went to a chiropractor a few times until my back felt right again. Those claims were paid and I got an additional $2,700 for incidental damages.
Insurance came through for me yet again, but my general frsutrations with the whole process is I called portland’s non-emergency line immediately following and they would not send anyone out. That made the claims process a bit more difficult that otherwise.
I am a big fan of insurance, I had a car stolen many years back and was paid handsomely for the priveledge, and I learned to live w/o a car.

I called the police too and they said to fill out the form I could get online. I just wanted to make sure the accident got put on the record for public policy/road design stats!

did I miss part two?

In early December I was T-boned going through an intersection out on N. Marine Dr. Driver was issued a citation. I was riding a 3 year old high end bike. The carbon frame was inspected by Ruskus Composites, they said I should not ride this frame. The Ins. co. took that with my photos and an est. for a new replacement from the bike shop. They offered me 70% of the full retail price of a new bike(same as I had). I took it and kept the old bike.
Now as for the personal injury, I have no idea what compensation I should settle for when I’m fully recovered. Any ideas would be helpful. I went to emergency for x-rays, had about 8 stitches on the knee, some road rash, swollen wrist and rotator cuff pain and 2 months of weekly PT so far. I think I flew over hood of car and landed face down in the street, I feel lucky.