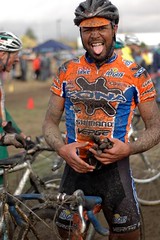 North Portland resident and well-known local mountain bike racer Matthew Slaven is recovering in a hospital today after being shot while walking through a park in Santa Cruz, California last night.

According to a story the Santa Cruz Sentinel, Slaven and a group of friends were walking through San Lorenzo Park at about 10:00 pm last night when they were approached by a man who demanded their wallets. The man then shot Slaven before fleeing with a wallet. The suspect is still on the loose.

BikeMag.com reported this morning that the bullet shattered Slaven’s clavicle and became lodged in his neck near his esophagus. Despite that, he’s expected to make a full recovery and BikeMag.com says he’s in great spirits in the hospital.

Slaven is a fixture on the local mountain bike and cyclocross scene. He used to work at Bike Gallery but currently works as a sales rep for Continental Tires while racing the professional enduro circuit with sponsorships from Kona and Bell Sports. Back in April we highlighted a video that features Slaven riding the trails at Sandy Ridge.

Slaven lives in the Piedmont Neighborhood in north Portland with his wife and 2-year-old daughter.

There are lots of comments and well wishes coming in for Slaven via this Kona Facebook post.

Get well soon Matthew! We all look forward to seeing you out on the bike again very soon.

This is horrible to hear about….. Our best wishes to Matthew and his friends that he was with at the time.

It is great to hear that his mood is okay after what happened.

Not to make light of the situation but of all the places a bad ass cyclist to get shot it’s in the collar bone….

Will from the Westside

I’m gonna start by asking no one use this as a chance to talk about guns and gun rights. Just be thankful that a fixture of Oregon bike racing is alive and able to be with his wonderful wife and beautiful daughter.

Thinking about you Slaven.

SilkySlim
Reply to  Will from the Westside

Sorry, just turning to add the slightest bit of levity to this terrible situation. Get well!

spare_wheel
Reply to  Will from the Westside

Someone casually attempted to murder a human being with an easily obtained gun and you do not want to talk about guns? OK then.

PorterStout
Reply to  Will from the Westside

I always like it when someone who “doesn’t want to bring up a topic” is the one who brings it up. Your insinuation that freely available guns had nothing to do with this is your comment on the topic that you wanted to slip in without being challenged. Same thing goes for helmet discussion – why did you bring it up if you really don’t want to talk about it. Yeah, I don’t know Matt, but best wishes for his speedy recovery. And best wishes for the next person who gets senselessly shot, whether or not they ride a bike. And the next one after that. And the next one. I got a great solution, let’s all start carrying .45s on our bikes. Yahoo.

Ok, but it better be carbon. Or ceramic. Weight weenies.

I was born in Santa Cruz and visit frequently and it is no longer a safe place. It has one of the highest crime rates in California due to major Hispanic gang problems, and a very high transient population which is populated with lots of criminals. The area where Matthew got shot is actually right behind the municipal office buildings and used to be a very popular park, until it became a homeless hangout. Sort of like downtown Portland.

Do you have any evidence that the person who tried to murder a human being with a GUN was “homeless”. Or do you just not like “those” people.

Read my posting very slowly. I was describing a place, not a person. Also, see Ms. Kefauver’s posting; SC is turning into cesspool.

I live in Santa Cruz and have for the past 20 years. I am a mountain biker and bike commuter and am so sorry this happened here (or anywhere). I go thru that park often myself on my bike and it is indeed a known gathering place for transients – sometimes in large groups. Regardless, I am so so sorry and wish Matthew a speedy recovery.

geez… I think of santa cruz as a dreamy wonderland of good weather, outdoor sports, interesting people/culture… but I have heard a few incidences of assaults in parks or green areas (the UCSC campus trails) lately. Too bad.

Hope you recover well. Best wishes to your family as well.

Santa Cruz is a dreamy wonderland. And it has homelessness, gangs and crime problems. That’s how cities are, neither all good nor all bad.

Pretty apathetic attitude…though I share this attitude as well sometimes. What can we do, right?

Mental health issues, crime, and poverty are all related and this type of pessimism only creates acceptance of the status quo. How about deciding to turn that apathy into action? Btw I was stabbed last year in front of the Burger King on MLK/Grand and Clay walking to work at 7:30 in the morning.

Don’t mistake my blunt observation for apathy. It’s more kind than writing a place off as dangerous and staying as far away as possible.

I happen to ride my bike alone through parks in San Jose every day that have significant homeless encampments. I wish they weren’t there both for the sake of the people who end up living that way, and for my own personal safety. I’m not apathetic at all.

Maybe apathetic was not the right word. But “wishing” certainly don’t do sh!t.

BTW, I didn’t read pessimism or apathy in either of your comments, and it isn’t just because I bike through the same parks and have seen the increase in homelessness and the sensitivity with which Mayor Reed has attempted to address the problems with.

Santa Cruz is beautiful by day but we no longer feel so comfortable walking our dogs through this park in late day or after dark. This is a bummer to read about and I hope Matthew is back in the saddle fully recovered and soon.