Photos from the Midnight Mystery Ride 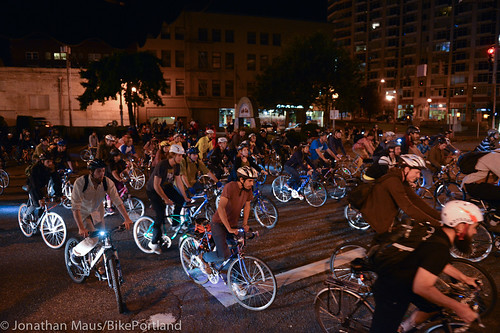 A large group showed up for the Midnight Mystery Ride on Friday night (this is only half of it).
(Photos © J. Maus/BikePortland)

I have not been out on many Pedalpalooza rides this year. After missing the big opening weekend while I was in Europe, I just haven’t gotten into the bike fun groove. I’m also being pulled by the strong magnetic force of home where my two year-old son and growing daughters don’t really care much about biking because it’s just what daddy does when he’s not with them.

I did however get out last Friday night for the Midnight Mystery Ride. This is a monthly tradition that’s been going on for over 10 years in Portland. The premise is simple: Show up at the announced meet-up spot, hang out for a bit, then “at midnight we ride” goes the slogan. The destination is only known by the ride leader.

It has been years since I joined an MMR. Besides the fact that it made me feel very old seeing all the new and young faces that had gathered in huge groups along both sides W Burnside and 18th, it felt great to be out on the streets on my bike at night with a huge group of people. The turnout was pretty big, which made it feel even more exciting than usual (the warm skies and “Pedalpalooza bump” were surely to blame). 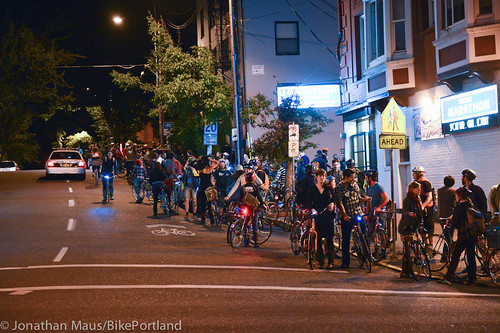 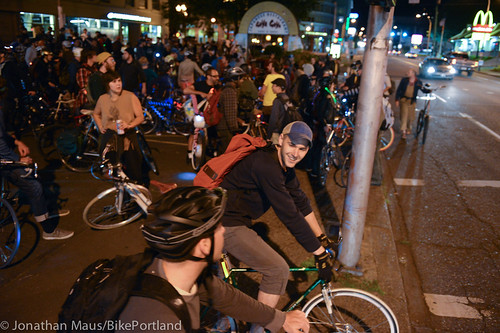 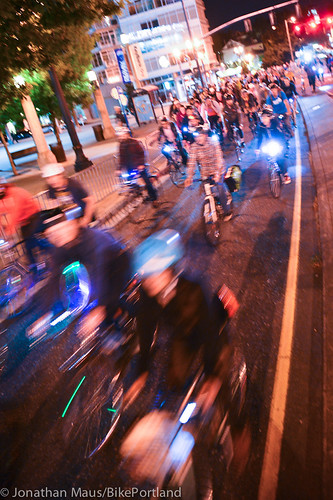 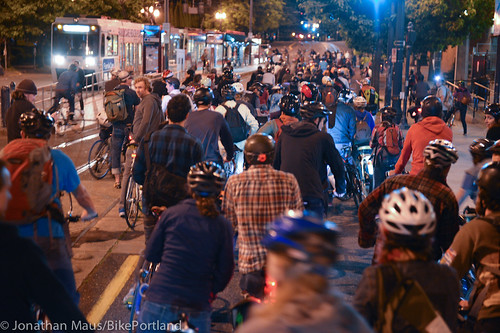 We took a unconventional route to the final destination — south through town and then up onto SW Terwiliger (disclaimer: I turned back after the first big regroup spot but heard later the ride ended somewhere on the western shores of the Willamette River south of downtown). I bailed out early (my boy wakes up, ready to play at 6:00 am), but still got to chat with a few friends, meet some new people, and enjoy a solitary and wonderful ride home through nearly empty streets.

I hope everyone is having a great Pedalpalooza. Check out a few more pics from the Midnight Mystery Ride below… 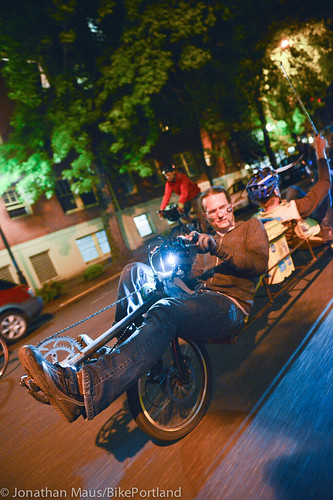 Adam George of BoundBikes.com on his amazing recumbent, back-to-back tandem. 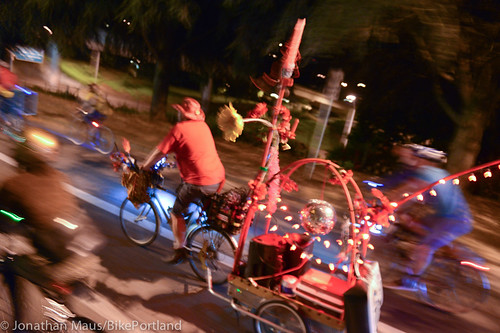 El Diablo is a fixture on Pedalpalooza rides. 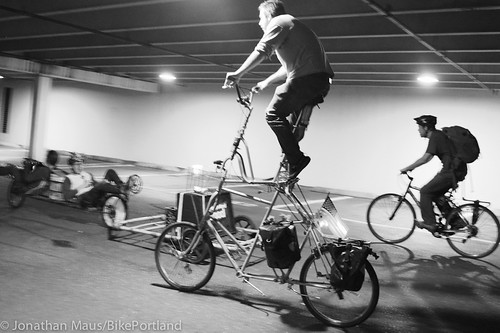 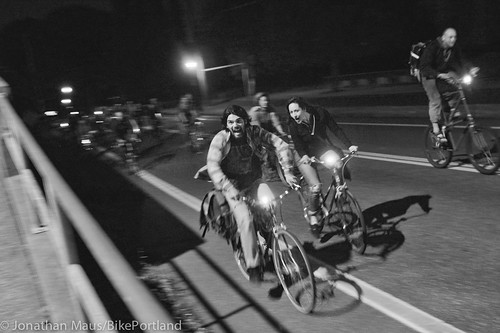 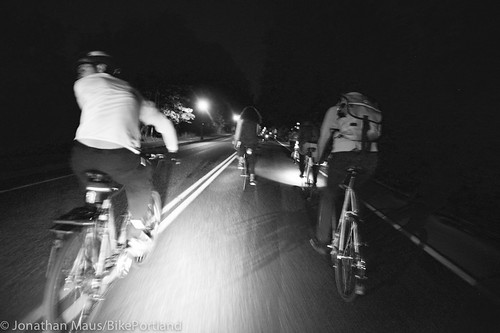 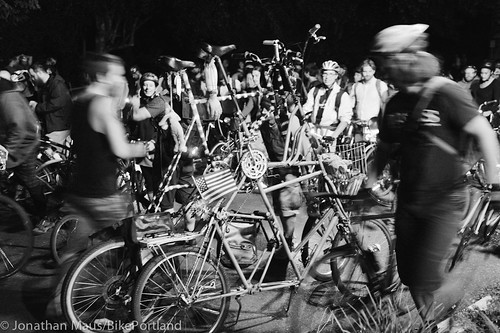 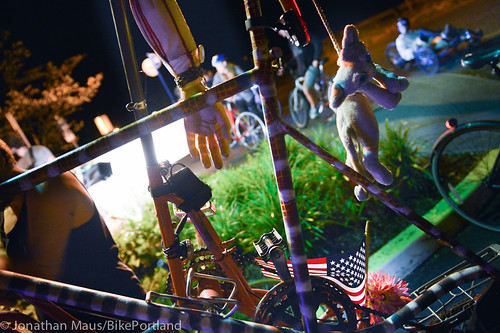 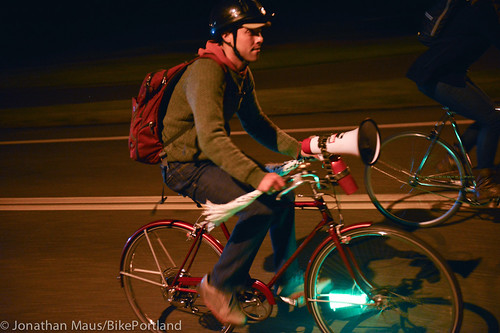 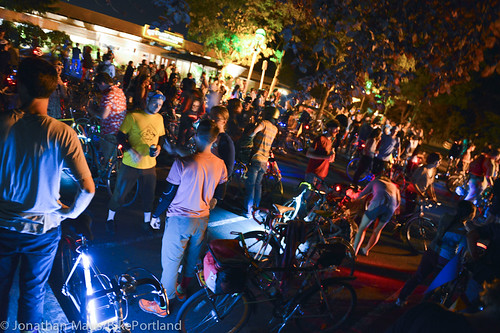 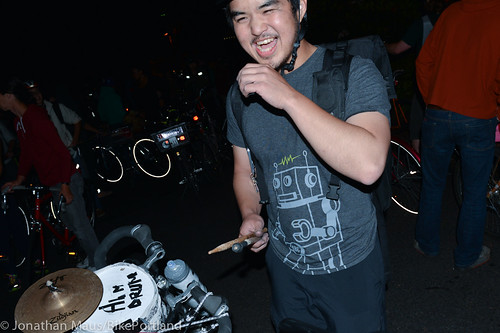 This is Greg Hum. He’s visiting from Boston and rolled out to the MMR to share his bike-drumming (yes, that’s a thing) skills. “I like biking and drumming, so I figured I’d combine my two passions,” he shared.

Check out the Dropout ride scheduled for Friday night to get your light night riding/music/party fix.

Yeah, unfortunately this is the one ride not on “bikey” time. Midnight prompt. I got saved once by being able to phone a friend who caught it.

i enjoyed the ride but i hope that next year the meeting spot is more open and the ride is more inviting for all the cargo/weird bikes that pedalpalooza brings out (less hills and narrow choke points). Also I wonder what the cemetery looked like after we rode through? There is a carefully balanced relationship between bikes and the cemetery and I hope 400 people riding through didn’t destroy any grass.

I didn’t even hear about it until this article!?

Every 2nd Saturday of the month. They don’t announce the meeting location until generally the morning of.
http://midnightmysteryride.wordpress.com/

Does anyone have more info on the awesome back-to-back recumbent tandem pictured here? Or its riders? I’m looking to buy one just like it. Thank you for any tips!

The caption for that photo:
“Adam George of BoundBikes.com on his amazing recumbent, back-to-back tandem.”

Got it now, thanks! The caption is new. 🙂

missed it this time but heard it was epic 🙂 love MMR

Vote Up0Vote Down  Reply
« Editorial: So much carnage on our streets, yet so little response
Former Portland mayor to lead public art bike ride »