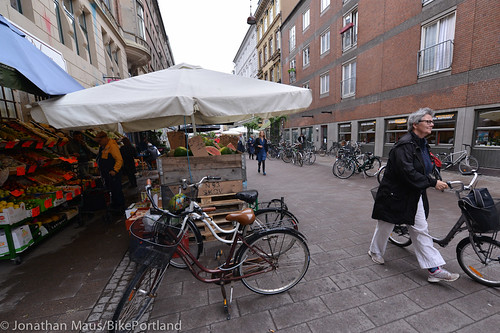 Life is very good on Blågårdsgade, a carfree street in the heart of Nørrebro in Copenhagen.
(Photos © J. Maus/BikePortland)

When it comes to creating a city where mobility and quality of life are put ahead of auto capacity and speed, Copenhagen is a great model to follow. While I’ve spent a lot of time on main streets (it’s hard to stop staring at all the bike traffic!), I want to share two examples of wonderful side streets: Blågårdsgade and Elmegade (gade is “street” in Danish). Both of these streets are directly off Nørrebrogade, a street that has frequent bus service (nearly bus rapid transit) and very high volumes of bike traffic.

I first noticed Elmegade because of its interesting bike lane that shoots north right off Nørrebrogade. Unlike many other streets in Copenhagen, there is no cycle track on Elmegade. Instead, on one side of the street there’s a standard, wide bike lane much like you’d see in Portland. The lane meanders north as it weaves around bike parking corrals and patio seating from the various cafes. This isn’t just by chance. The weaving has a traffic calming effect that keeps the street safe for everyone. 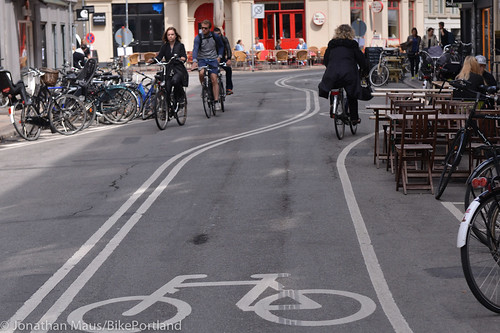 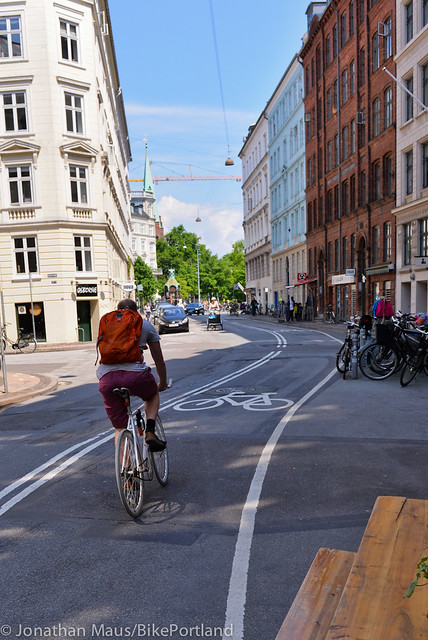 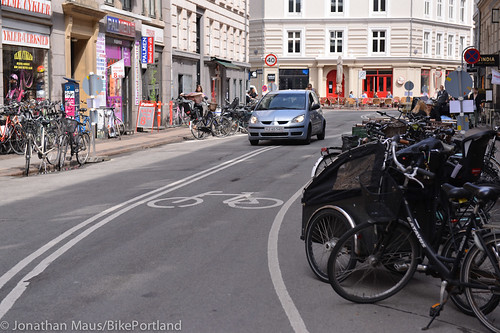 Elmegade is southbound only for people driving cars, but it’s two-way for people on bikes (your wonky friends will call this a contra-flow bike lane). There is no marked bike lane in the southern direction, because that lane is shared by car and bike traffic. The speed limit is 40 km/h, which is about 25 mph. Even with frequent auto traffic, the street feels comfortable and relaxed. This is a great example of a compromise solution that doesn’t exclude either mode; but vastly improves the safety and livability of the street: 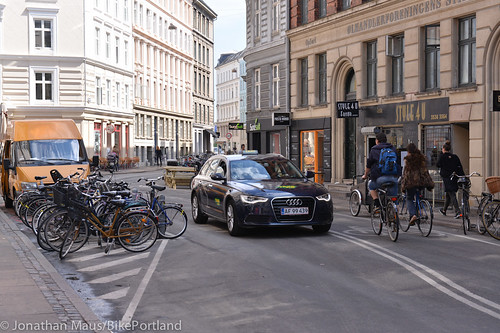 Elmegade is full of little boutique shops and cozy food and drink places. The famous Laundromat Cafe is the largest. While I was there, the sun broke out and the entire corner was full of people sitting outside. Elmegade is a success in large part because it almost feels like a car-free, promenade street. It’s quiet and the sidewalks invite casual conversations. When I think of Elmegade, I want to call it a bike street. Bikes are parked everywhere; in designated corrals, on the side of buildings, and often just right out in the street. That’s a little innovation of Copenhagen planners: Instead of installing racks, they simply painted out a section of the street and encouraged people to park their bikes (everybody has a kickstand here). Sometimes bikes fall over, but it’s no big deal. I can’t think of a simpler or cheaper bike parking solution. 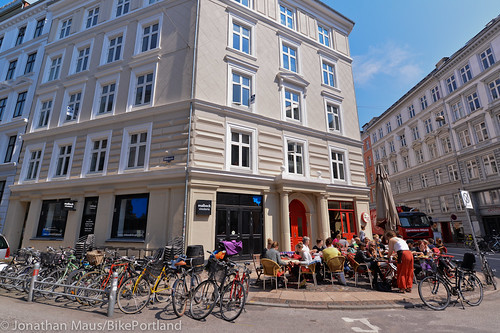 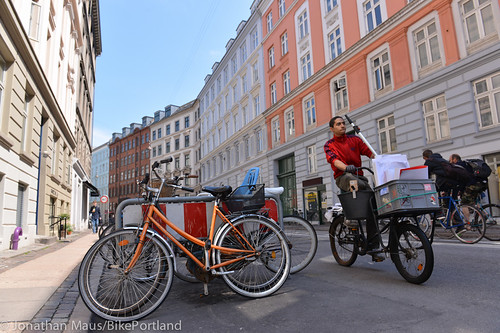 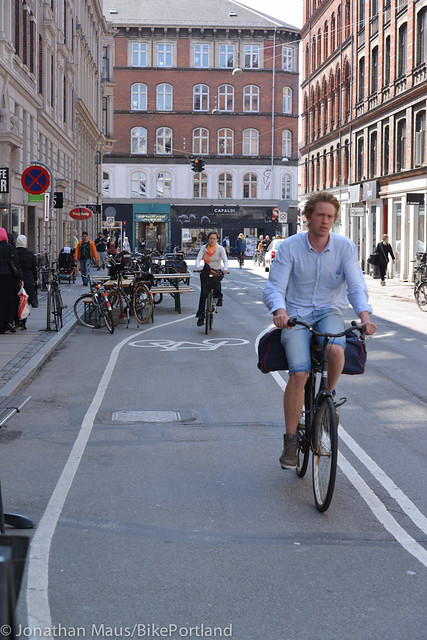 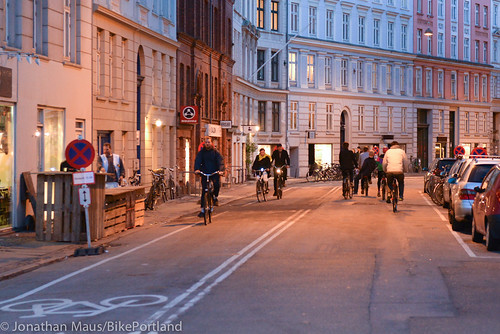 At night, the street comes alive with friends riding side-by-side.

A few blocks to the southeast of Elmegade is Blågårdsgade. This is a very special street that I find myself drawn to over and over again. It connects to the much busier Nørrebrogade; but only for people walking or biking. Cars can’t enter Blågårdsgade from Nørrebrogade. The street itself looks and feels like a classic European pedestrian street. It’s narrow and old, five story buildings on each side make it feel cozy and intimate. Like any successful street, Blågårdsgade is full of great little shops and outdoor seating cafes. There’s also a produce market that gives it even more of a bazaar/shopping feel. At one end of the street there’s a large park with beautiful trees and benches. A local told me they do ice-skating in the park in winter months and it’s used for flea markets in the summer. 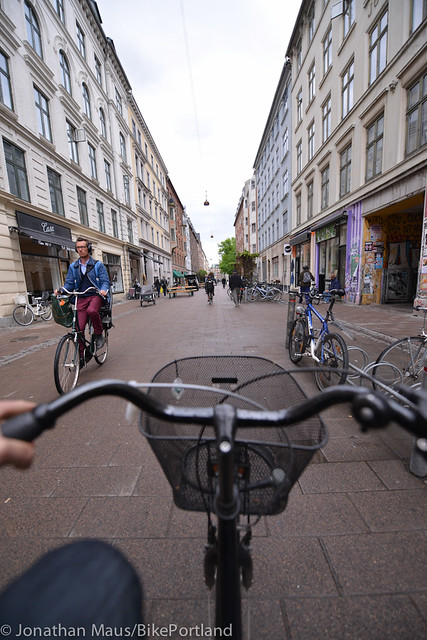 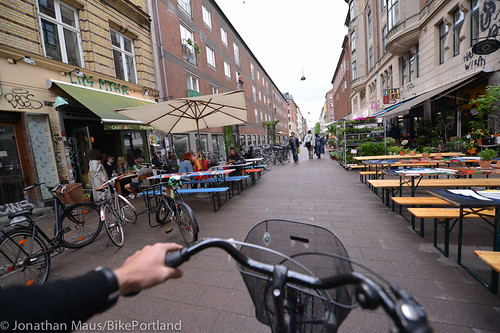 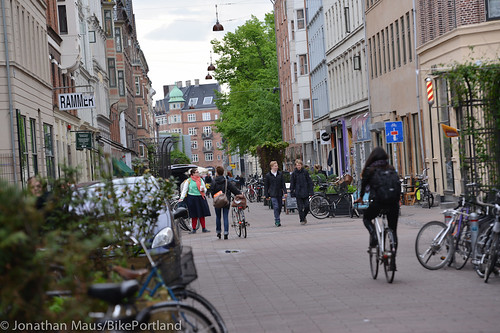 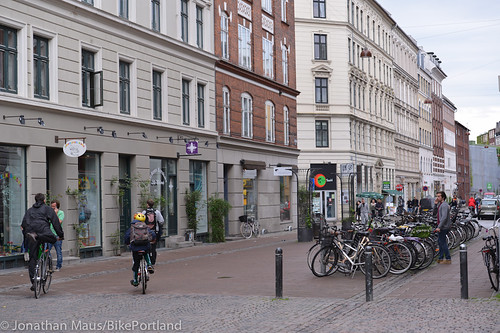 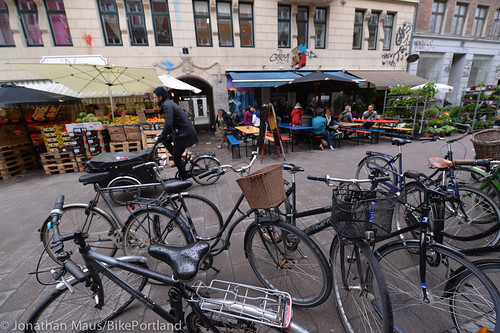 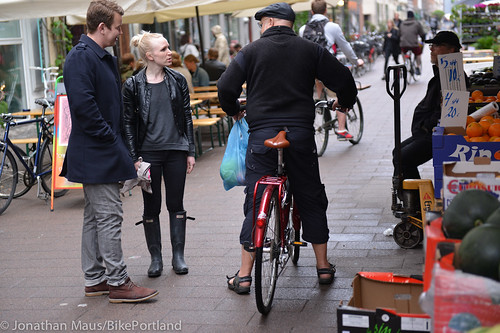 You see this all over Copenhagen. Friends stopping for a chat while astride their bikes. These conversations would not be possible if people were in cars or on the Metro/bus. 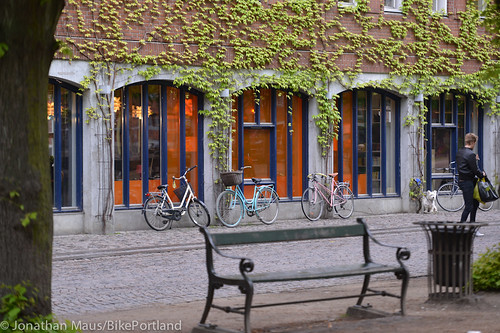 People can drive across Blågårdsgade, but they can’t drive on it. As a result, the street is a popular cut-through for people on bicycles. As I observed it during the afternoon rush-hour, I noticed many families biking with small kids would use it instead of the busy cycle track. 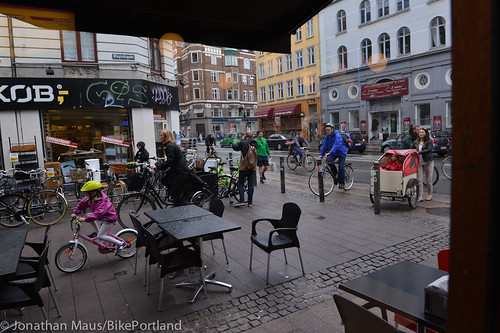 This photo shows several families who have just turned onto Blågårdsgade from the busy and hectic Nørrebrogade. 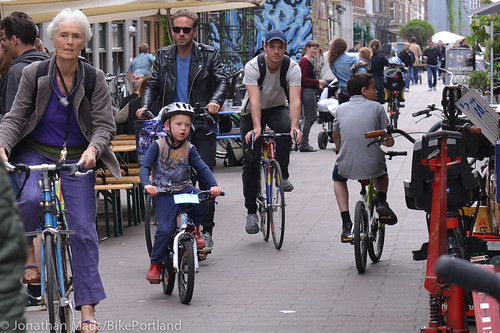 This photo says a lot about Copenhagen. 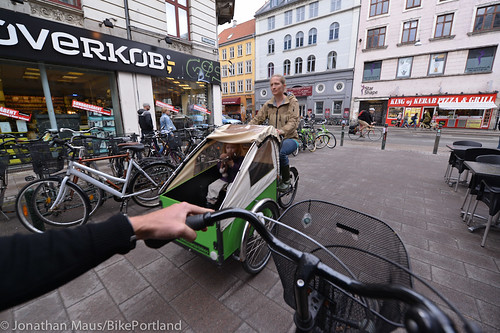 While it gets crowded with people on bikes and on foot, it never feels stressful. People are quite considerate and the pace is just right. 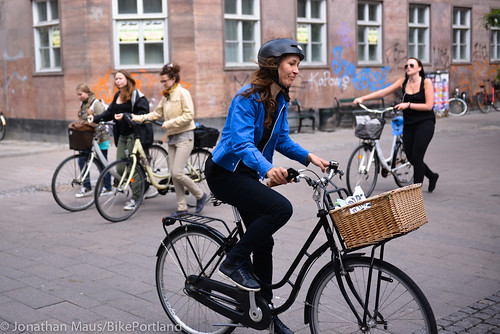 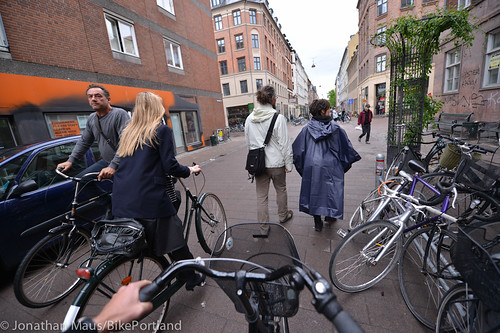 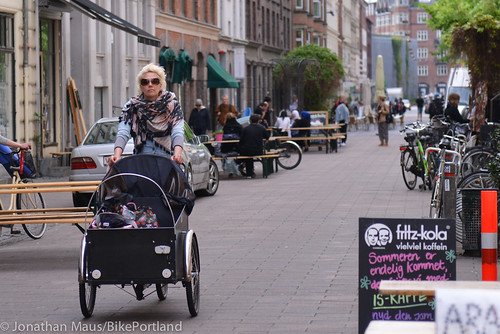 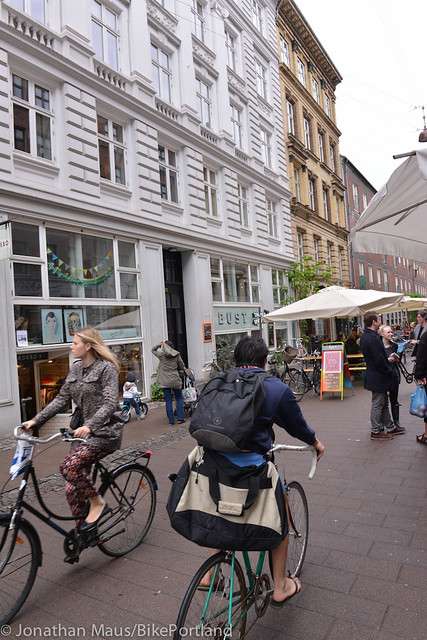 Part of what makes the street great is the liberal use of cobblestones. The cobbles are easy to bike over (especially with the wide-tired and comfortable bikes most people have here), and they have a very calming effect on traffic. 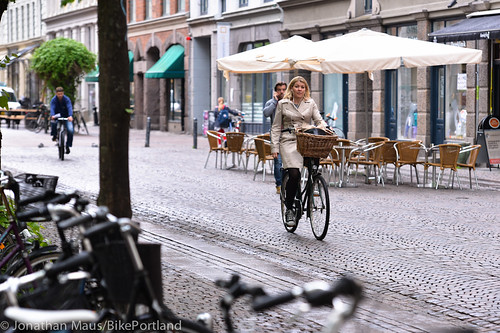 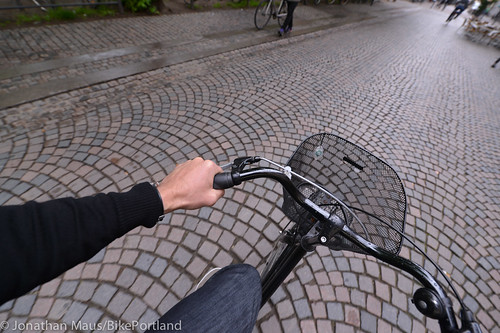 And when traffic is calm, people are happy… 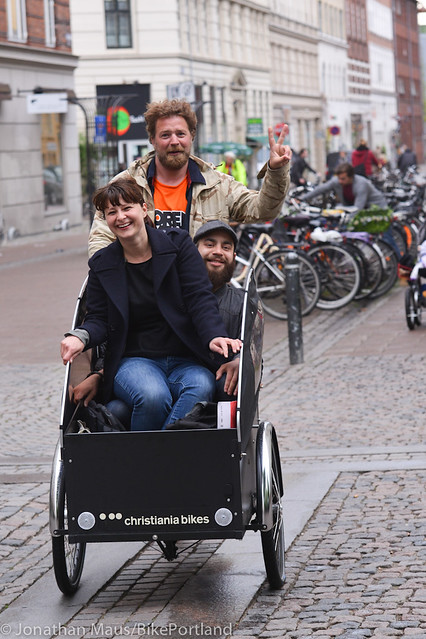 These are just two of the many people-friendly streets that are all over Copenhagen. Every time I go out I come across another one. By creating these streets, the City of Copenhagen’s planners and traffic engineers are having an immense positive impact on their citizens’ quality of life. They have managed to create public spaces that function as transportation corridors, while still being vibrant social and economic hubs.

There are definitely streets in Portland where we can adopt some of these concepts. I can imagine NW 13th becoming similar to Blågårdsgade and perhaps a street like SW 9th near Director Park could become more like Elmegade.

Stay tuned for more coverage from Copenhagen. There are lots more images in the photo gallery (sponsored by Pro Photo Supply).

As for Belgium block street pavers (usually incorrectly called “cobble stones”*)…too bad the few remaining streets in Portland with them seem to be under attack (removed for smooth bike lanes) or at best poorly managed by the City …and not repaired well after utility cuts.

*Cobble stones tend to be more rounded (natural shape vs. cut) like river stones. Used in much older streets vs. the nineteenth/ twentieth century used of cut blocks.

sett stones are the common term…

and yeah, very few people would want to bike on a real cobblestone street… might be fun in a full-suspension mountain bike though…

Thanks Todd. I don’t want to confuse anyone. I made an edit to the story. The really are easy to bike on.

And little to no spandex!

Jonathan: Are there less people on bikes & in a hurry over there? No one seems to be trying to race-commute like is annoyingly common here.

Absolutely. But there are varying speeds for sure. It’s not all big upright bikes and people going slow. I think in general people are much more considerate of others in the bikeways here… Overall the skill level is amazing. These people know how to ride bikes in the city. They don’t have a big ego about it, they are just very comfortable and capable on a bike.

How do you feel you are fitting in? Was it intimidating at first?

Life is also more relaxed in Denmark. it’s not like go go go over there like it is here. For example, everybody, including the managers, goes home at 4:30 pm to pick up the kids from school and then they have family time. No evening meetings or staying late. They might look at their email again later in the evening, but family time is sacred.

I went to Copenhagen last July and was blown away by all of the bikes. It was just amazing. People were friendly and considerate. There was no race commuting. Thanks for bringing back memories of my five days in Copenhagen.

PS I think my heart skipped a beat when I emerged from the subway and saw the bikes stacked in three rows on top of each other for the first time.

Jonathan: Excellent photos & text! Reading your giddiness reminds me of how I felt about Portland when Mrs Dibbly & I moved here 3 years ago. 🙂

The computer chip was amazing at first, but now they’re everywhere and we don’t even think about them much. I suspect it’s the same way with bikes for the Danes. A bike is just another appliance. Hopefully we’ll get to that point here some day.

Thanks Jonathan. I was last there in 2001, previous to having much interest in, awareness of bicycling. Now, this sounds like my heaven. I love serendipitous wandering and little nooks and crannies of places to explore, can’t wait to go with my kiddo and wife!

Hi, good to see that you are enjoying our city. Just a note on Blågårdsgade, where I happen to live. Cars are in fact allowed on the street, but only for dropping off and picking up people and goods. Parking is generally not allowed and as you say, through-traffic is not possible.

Are the parked bikes on kickstands locked, and to anything?

Most danish/dutch style bikes have an integrated lock installed such that the rear wheel can be locked and the bike simply left on it’s kickstand. The bikes are basically all visually the same and even the best ones are awesomely heavy and very hard to walk off with.

Jonathan, thank you so much for sharing this with the world, keep up the amazing work.

Look at all those handsome 5 story apartment buildings…probably all without auto parking. That is the key to lively, active streets. For retail to thrive, it needs customers. It all comes down to Density!

Great to see Nørrebro and those two streets portrayed for something so positive – often they figure in the local news as crime scenes (believe it or not). Copenhagen is a great city for bikes – compact and flat and the motorists are – generally – very considerate.

Jonathon, Excellent reporting as usual. It appears that there is a noticable lack of on-street car parking, allowing space for more bike lanes and much improved sight-lines. Can you confirm and if so tell us how important this lack of on-steet car parking is in helping to make it such a bike friendly city? thanks much. jeff

Ha! I was in Copenhagen last fall and Blågårdsgade was my favorite street too! You have described it perfectly. Did you try N Cafe (2 blocks in from Nørrebrogade)?