“There are so many people interested in trail advocacy… We see this as an opportunity to help them understand they’re not alone in their cause and that all these trail projects are connected.”
— Aaron Brown, The Intertwine

Organizers of tomorrow’s Regional Trail Advocates Forum hope that the first ever event is the start of something big. With trail projects stretching from Washington to Wilsonville, the goals of our region’s many advocates and volunteer activists might seem disparate and overwhelming; but put a bunch of dedicated people in one room and amazing things are bound to happen.

The event is being put together by the venerable 40-Mile Loop Land Land Trust (founded in 1981) and the coalition of public agencies, non-profits, and private firms known as the The Intertwine Alliance.

Program coordinator for The Intertwine, Aaron Brown, said he hopes the event spurs connections among like-minded activists. “There are so many people interested in trail advocacy… We see this as an opportunity to help them understand they’re not alone in their cause and that all these trail projects are connected.”

“Our organizations are teaming up to help develop a grassroots coalition of individual citizens from across this region who are looking to build the network of trails that make up our shared vision for a regional network of trails throughout the Portland/Vancouver metropolitan area.” 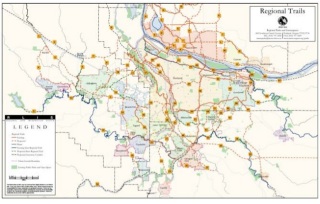 Brown points to the non-profit group NPGreenway as a model of what’s possible when citizen activists work together around a common goal. NPGreenway first met nearly seven years ago this week to share a vision for a riverfront trail that would extend the Eastbank Esplanade to Cathedral Park in St. Johns. From humble beginnings, this group has established the project as a top priority for local politicians. As we speak, Portland Parks & Recreation is beginning the planning and engineering process for the project (more on that later).

Other possible outcomes of an event like this could be a new group being formed. I’ve talked for years about how it would be great to see something like a Friends of the Fanno Creek Trail come together that would maintain and advocate for improvements on that fantastic stretch of paths.

Beyond spurring connections in the community, Brown hopes the event makes trail advocates stronger and more organized. “The goal is to cultivate a bunch of activists from around the region and speak as one unified voice the next time there’s a funding conversation.”

Saw my first Intertwine sign on the Fanno Creek Trail recently (Tigard side of Scholls Ferry). Now I wish I could find a trail between Sherwood and Portland, ’cause 99W sucks for a commute route)