Charlie Hales will be Portland’s next mayor 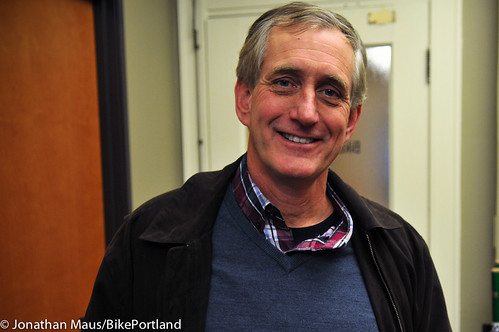 Your next mayor.
(Photo © J. Maus/BikePortland)

Charlie Hales has easily won the race for Portland mayor. Last time I checked, he had 67% of the votes, compared to 33% for Jefferson Smith.

In his acceptance speech tonight, Hales said he’d, “Refocus on basic services” and that his administration, “would not rest until there’s a quality school in every neighborhood and a police bureau that reflects our values.”

On KGW-TV after Hales’ speech, Commissioner Nick Fish elaborated on what Hales means when he says, “refocus on basic services.” “There’s a perception,” Fish said, “that council has been going in too many directions” and that it has “not had a clear focus.” “We’re not going to be as ambitious. These are tough times, and people expect us to tighten our belts.” 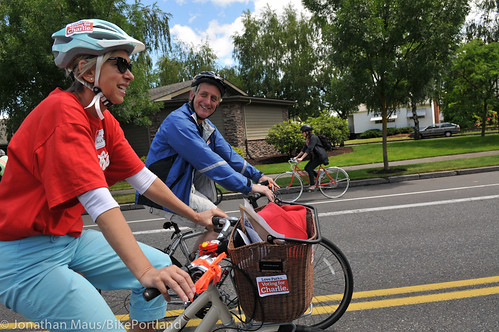 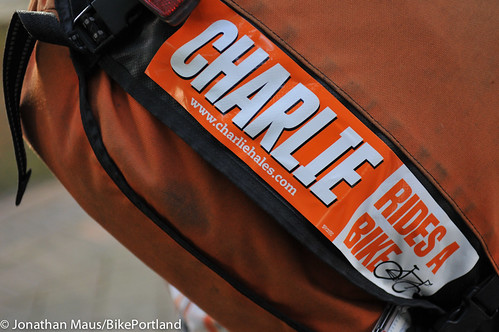 Hales had support from many local transportation advocates — including former PBOT bike coordinator and Alta Planning President Mia Birk — yet he didn’t win the endorsement of the Bike Walk Vote PAC. Hales laid out an active transportation platform back in September after holding a roundtable on the topic; but I didn’t find it very exciting.

Hales also came under fire here on BikePortland for trumpeting an article from The Oregonian that was clearly biased against bicycles and that I felt was misleading and inaccurate. Despite widespread condemnation of the article, Hales featured it front and center on his website. He initially defended his use of the article, but ultimately removed all references to it from his website.

Hales was a Portland City Commissioner beginning in 1992, but left mid-way through his third term to take a position with a consulting firm that promoted streetcars in cities throughout the country.

Hales rides a bike regularly and he’s clearly sensitive to bike access issues. He also has a solid transportation track record. However, so far he has been short on specifics when it comes to if/how he’ll change the existing status quo.

I’ll share more thoughts in the coming days and weeks; but at this point I’m just looking forward to turning over a new leaf at City Hall.

For more on Hales, read my interview with him from back in December.

Ok folks, I know some people here voted for Hales and some did not. That is cool and if you voted I just want to say thank you for taking part in the democratic process.

But no matter who you voted for, Hales is now who we’ve got. This is not the time to be bitter or lament about what “could have” been.

Speak up now and let Hales know what we want! Let him know that if he works hard for our safety we will have his back. Voting is a wonderful thing but our involvement in the political process does not end there, it STARTS at the ballot box.

Hales cannot do it alone, so lets help him.

Let him fail. Would serve him right. Let him spin in the wind since this is what he wanted. Oh wait. He already bailed once on the city. What’s to say he won’t once he makes a mess of it again.

This is exactly what I’m talking about as to what we should NOT be doing.

If he fails, who wins? I’m not a fan of his, either, but I don’t see any point in hoping for 4 wasted years when there are so many transportation and livability issues that need to be addressed.

will he fire Tom Miller?

Yes. He fired everyone after winning the primary. It’s his SOP. Expect the worst.

Come on guys, Andrew is exactly right that civic engagement and your voice in government don’t end with your ballot. If you throw up your hands now and say “oh well, I guess Portland’s screwed,” it will be. If, on the other hand, you keep trying to shape the Portland you want, I think we have a pretty good shot regardless of who the mayor is. Let’s help the process along, not act like spoiled kids who didn’t get what we want and now go pout in our corners.

@none, If Charlie Hales fails, do you think we’re all doing any better? Being able to say “I told you so” may make you feel better for a few seconds, but it doesn’t do anything for helping make Portland a better place–which is all of our jobs, not just the mayor’s.

Supporting the CRC is promoting back to basics government?

Doesn’t matter. Clark Co. rejected the sales tax increase required to fund operations, whether it be LRT or BRT. Federal highway and state highway spending is going to continue to decrease as the gas tax becomes worth less and less, and the bridge design is still non-compliant. I think we can start planning the Wake.

Would love to see a new federal/OR/WA initiative to institute I-5 bridge tolling *now* to manage congestion–completely separate from the CRC big picture–and coupled with a new strategy for shunting pass-through traffic over to 205…then watch the “safety” problems at the Rose Garden exit just fade away.

I recall reading awhile back that states can’t start tolling on an interstate unless there is a construction project to go with it.

You can either lurk online whining about how much you are getting hosed and ranting about how things should be, or you can get to the meetings and let your elected representatives know in no uncertain terms how you want this city to be. Despite all the ranting about the I-5 widening, how many of you showed to the actual council meeting?

Hey, at the very least, at least he doesn’t have ADD and would forget to do things like, say, govern.

Andrew, it’s the DAY AFTER the election. It’s not at all unreasonable for those disappointed in the outcome to exercise their free speech and talk about it. There’s still plenty of time left for positive engagement.

For the record, despite having supported Jefferson Smith in the primary I couldn’t bring myself to vote for him. Count me among the nearly 8% — and that’s a huge story right there — who wrote in Sam Adams.

Glowboy. I’m interested in the % of write in ballots. 8% for Sam Adams? I’m sure there was a big write in % because many folks didn’t want either Charley Hales, or Jefferson Smith (Or Eileen Brady for that matter) for mayor.

The article Jonathan wrote says 67% for Hales and 33% for Smith. Where is the write in %? Where can I find that info?

Here are the final results:

During the primary Hales, when asked by a child how he would make Portland safer for people on bikes, said he’d have the police pull over anyone on a bike that wasn’t properly lit… and give them free lights! Sounds like a good idea to me. Wonder if he’ll follow through on that.

I’m hoping that Hales was campaigning when he advocated for “Back to basics/ potholes.” I’m hoping that he will suprise everyone and keep Tom Miller, and get bold & build out the 2030 Bicycle Master Plan. I’m also hoping that Hales will announce a BIG bicycle project getting funded and starting to get built in his frist 100 days in office.

We don’t know how many of that nearly 8% of the votes were for Sam Adams. They will never be counted. Write-ins never are, unless it is determined that they could be decisive.

But it’s reasonable to assume that the lion’s share of them, though far from all, were for Sam. I’ve heard of Sam being discussed as a write-in candidate in numerous forums over the past few weeks, and I’ve heard no other specific name thrown out.