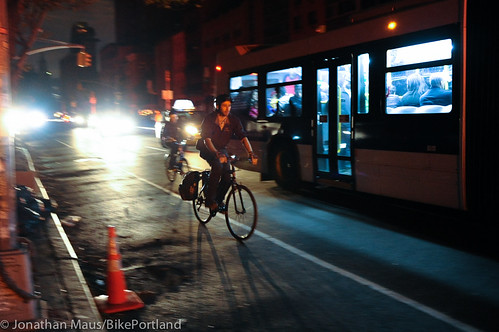 On Thursday night, when almost all of Lower Manhattan was still without electricity, I walked around the darkness to see how bike commuters were handling the conditions. Back on Tuesday I documented the blackout in the financial district on the southern tip of Manhattan. But since that was just one night after the storm and most people hadn’t yet returned to work, bike traffic was minimal.

By the time people began commuting again two days later, the NYPD and MTA were in full force on major thoroughfares trying to keep traffic safe while dealing with the daily exodus of tens of thousands of people. Bowery Street, which has been turned into a bus rapid transit corridor while subways limp back to life, was shrouded in total darkness. To give bike riders, walkers, and bus, car, and taxi operators some sense of awareness, NYPD officers had lit flares at every intersection. This disaster has obviously strained the NYPD, but they managed to go deep enough into their org chart to find officers to capably direct traffic at nearly every major intersection. Amid the potential chaos, these workers definitely earned their keep. Their mere presence offered a sense of relief, security, and order on the streets.

While packed buses roared down Bowery in platoons of 7-8 at a time; people on bikes made their way in the margins. I was aghast at how many of them rode in complete darkness. For some reason, I found that bike riders in New York use front and rear lights at a much lower percentage than we do in Portland. I don’t like riding at night without lights in regular conditions. In a blackout? In Lower Manhattan? I would rather walk.

In addition to the people who were riding home, I also noticed several groups of friends, who had met up specifically to “ride the blackout.” They swooped and swerved through the streets, enjoying the eerie, rare calm and lack of traffic signals. 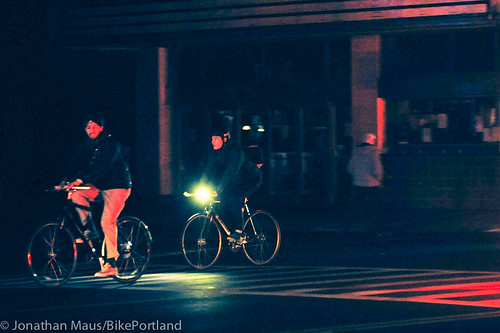 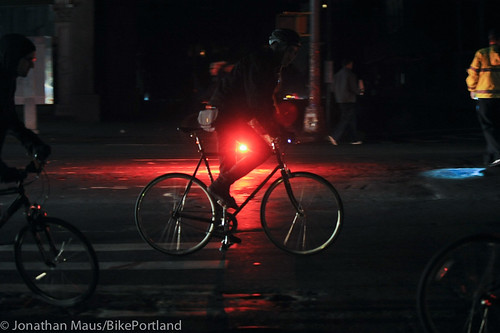 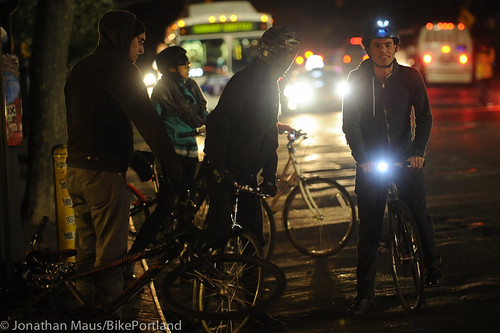 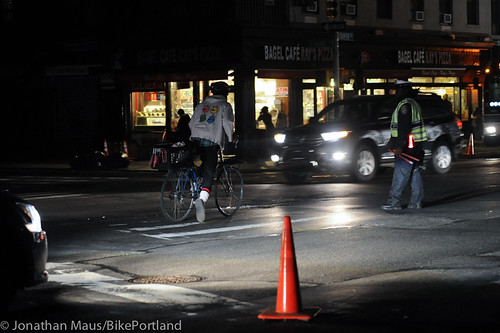 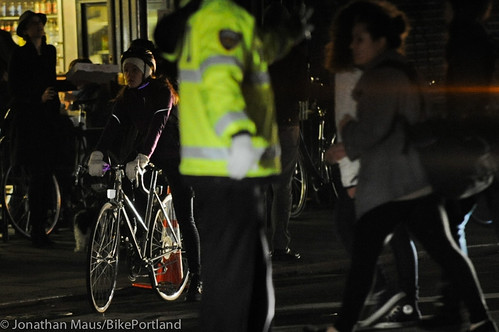 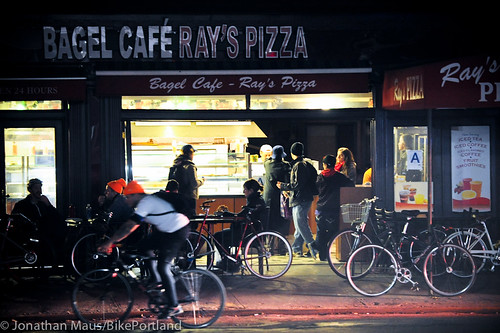 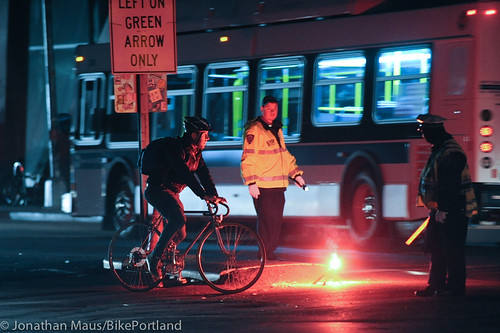 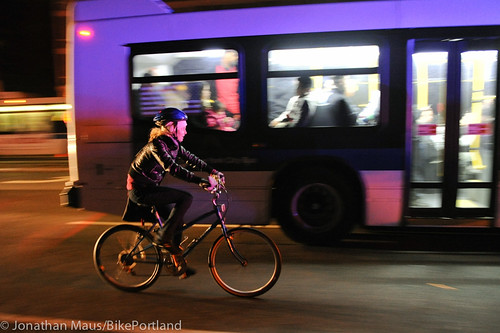 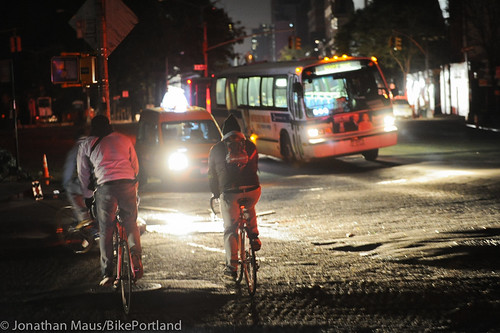 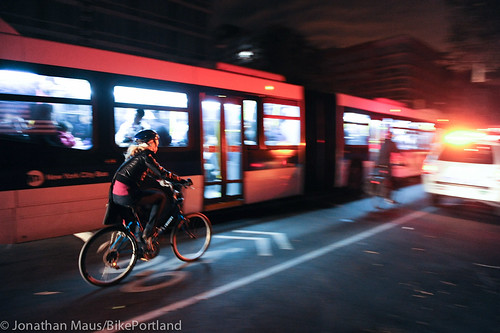 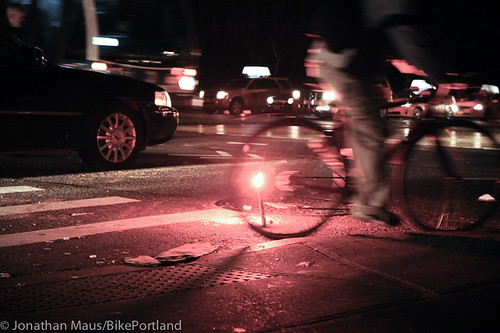 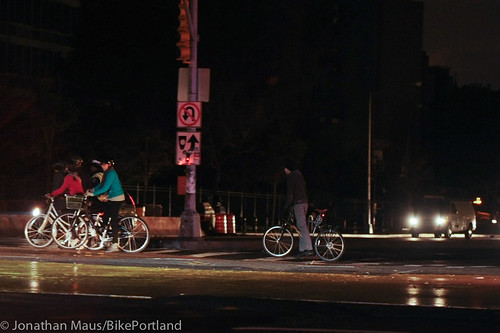 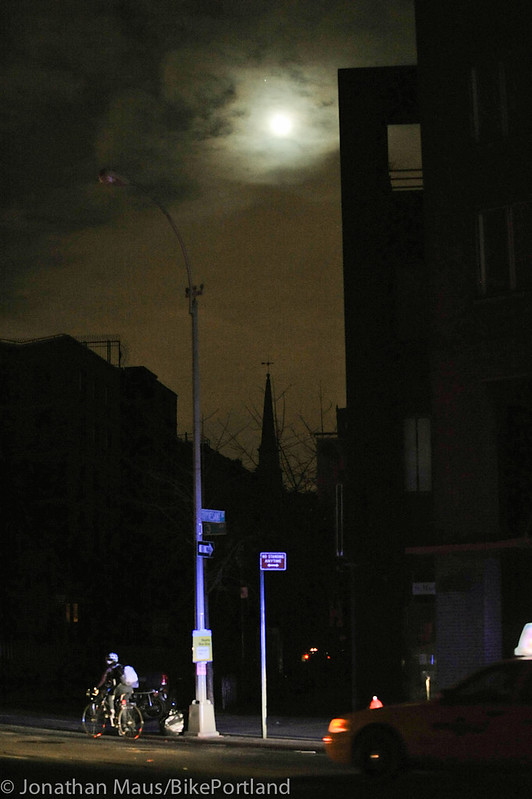 By the time I get home to Portland (at the airport now), the electricity will be back on for much of Lower Manhattan; but I won’t soon forget what it was like with the lights out. Next time you’re commuting home at night, just imagine what it would be like without any streetlights, no signals, and no lights from homes or businesses.

Imagine it? I’d imagine that it might make more sense than you’d initially think. Without traffic lights, and all the other lights from businesses and residences, there’d be less interference for motorists to have to filter out to see cyclists. That said, I’ll keep riding me bike with my typical lighting as long as I could given the circumstances.

Great stuff and amazing photos. A minor side note, the street you mentioned is just called Bowery or “the Bowery”.

Regarding the number of riders with lights compared to Portland, I would imagine that this is simply due to the fact that there are actually dark places in Portland. We have streets with dense trees that block out street lights, we have parks and pathways without lights. The first time you hit a pothole or a rock that you didn’t see, you go out and buy a light. I would imagine that New Yorkers can ride for years without ever riding in a truly dark place (with the exception of blackouts).

Chris I, that’s exactly what prompted me to upgrade from my first bike light system, a 10W TurboCat. I was riding in the bike lane on Murray Blvd and hit a chunk of 2×4 that was lying across my path. Never saw it coming (though by some miracle I didn’t crash), and that made me realize I needed a light that actually lit the pavement even when it was raining.

Welcome home! Glad you are back safe and sound. The NACTO conference certainly ended up being quite an experience. Thanks for your coverage of the conference and of the storm.

speaking of dark…I recall that Katrina occurred during the new moon, no light from the moon at all despite clear skies in the days following. There was a full moon for Sandy – although cloudy skies probably kept it out of sight.

Yes I too saw the same thing on the Manhattan streets – a super majority of cyclists without front head lamps.

Normally, even at night, there is plenty of light on Manhattan streets to ride safely. So a lot of people with bikes probably don’t have lights. Even more so for people who normally ride during the day and take other transportation at night.

For those that do have lights, batteries are scarce and are probably being used up more quickly as people use their bike lights as flashlights as needed.

Thanks for the coverage on use of bikes after the storm. Not to mention covering dedicated lanes for bus transit! Nothing like being in the right place at the right time.

As a chronic reader of the (folding paper) NYT: so much for dead tree media!

The real hazard was all of the pedestrians jaywalking in the dark while wearing the unofficial uniform of NYC: black coats. The bike lanes on the bridges were full of people wearing black, walking side-by side and even three abreast.