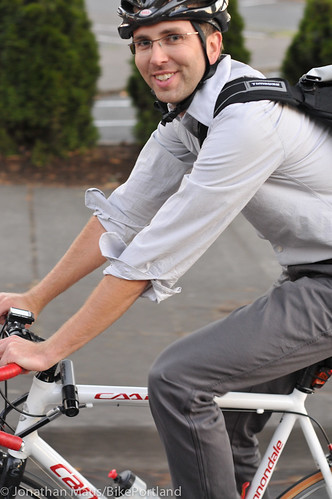 There’s a new planning position within TriMet that deals solely with bicycling and walking and Jeff Owen is the man they’ve chosen for the job. This is great news.

Jeff comes to the position with top qualifications and loads of experience. Prior to starting at TriMet back in July (he replaces former bike guy Colin Maher who left in November), Jeff was the Bicycle and Pedestrian Coordinator for the City of Wilsonville/SMART Transit. Jeff joined us for the Bicycle Advisory Committee ride on Tuesday night and it reminded me that I’ve been wanting to share a bit more about him and the work he’s doing at TriMet.

What is your title and what are your general responsibilities at TriMet?

My title is Active Transportation Planner. The short description is to have a key role in the planning, development and implementation of active transportation projects, as well as strengthening partnerships with other jurisdictions, community-based organizations such as BTA and WPC, and the private sector to ensure growing investment in Active Transportation and access to transit.

“Regarding bikes on MAX, we routinely receive both comments for bikes to be banned from MAX as well as suggestions for more capacity to bring bikes onboard.”

My professional background is based on a Bachelor of Landscape Architecture and Master of City and Regional Planning, and includes working in both the private and public sectors. Private sector experience includes working as a community planner/urban designer in small and medium size consulting firms working on projects such as corridor studies, urban design manuals, long range plans, downtown revitalization, and a context sensitive roadway manual.

My most recent experience comes from the public sector as the Bicycle and Pedestrian Coordinator at the City of Wilsonville/SMART Transit before joining TriMet the last week in July. There I focused on the promotion of biking and walking, creating tools such as biking and walking maps, creating a Wilsonville Bicycle and Pedestrian Task Force group, strengthening partnerships with neighboring jurisdictions and the larger region, to some extent reviewing development proposals, and learning quite a bit about transit in general. I think this path was a natural progression to this new position at TriMet.

Can you describe some of the projects and policies you are working on right now and into the future? 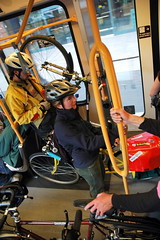 It’s clear that TriMet favors bike, park, and ride vs. increasing on-board bike capacity… So how does TriMet see biking integrating w/ its service into the future?

We have made investments over the years to encourage bike parking at transit stations and some bus stops, and we also encourage the use of folding bikes. We have recently tested one model of bike racks for the front of our buses to increase rack capacity from 2 bikes to 3 bikes, but the model we tested raised enough safety concerns that we couldn’t move forward with it. In our tests we found that when loaded with bikes they blocked the operator’s vision, impacted the operator’s line of sight and blocked headlights.

Regarding bikes on MAX, we routinely receive both comments for bikes to be banned from MAX as well as suggestions for more capacity to bring bikes onboard MAX. At this time, our current policies remain in effect and are located on our website. These policies manage expectations for bringing bikes onboard vehicles, outlines types of bikes allowed on TriMet, provides how-to videos for all of our vehicles, and provides bike parking options by type and location. Continuing to integrate bikes with transit will remain a strong interest of ours in the future, but must also be balanced with customer comfort and safety for all passengers.
—

I look forward to bringing Jeff’s work into the fold here on the Front Page. If you have a question about bikes and TriMet, drop him a line at owenj[at]trimet[dot]org.

Chris I
Reply to  Craig Harlow

I’ve ridden the light rail trains in Copenhagen. Their platforms were much longer, permitting very long trains, with much more space. MAX is limited to 2-car trains. Of course, pushing for a downtown tunnel that would enable expansion to 4-car trains would probably be denounced as a waste of money…

but I think more frequent service would be better…

The trains are as long as they can possibly be downtown. Our city has very short blocks. Adding any length to the trains would block intersections. The only solution is a tunnel in the core. Most other platforms can be lengthened fairly cheaply to accommodate 3 or possible 4 car trains. The problem is that any tunnel project would likely be in the $1-2 billion range.

Well. Test some more bike rack models out, perhaps? I think I recall some cities with a 3-bike rack in place. Also, is there anyone testing out back of bus racks? I’ve seen these on kind of excursion/tourist buses that hold 4 or 5 bikes I think. Or am I dreaming? No, I believe I’ve seen ’em.
I’ll email Mr. Owen this query as well. Thanks.

Chris I
Reply to  Andyc

I guess you could say “they block the headlights”.

And what was Mr Owen’s response?

What happened to the Grizzly Adams beard?

The best thing we can hope for regarding bike capacity on MAX is increased levels of service. the problem of 8 hooks per 2-car train would be lessened if trains came every 5 minutes on all lines. This improved service helps everyone. More room for wheelchairs, strollers, people, and bikes.

I have had the pleasure to meet and talk with Jeff on a number of occasions at various planning events and conferences. He has always struck me as bright and articulate, and I think he will make a great addition at TriMet. Congratulations, Jeff!

Jeff is seriously the best! I worked with him at SMART in summer 2011 and really appreciated his thoughtful perspective on all things active transportation and his awesome attention to detail on maps and design projects. TriMet could not have found a better person for the job.

Way to go, Jeff! Looking forward to your leadership at Trimet

Maybe he can come by and see how the relocation of the #8 terminus onto Dekum has lowed safety for cyclists.

Congrats, Jeff! And congrats, TriMet! Jeff’s thoughtfulness, wicked smarts, and creativity are sure to help weave delightful multi-modal webs throughout the region.

I’m always pleased (NOT) to see Trimet having money to pay for “planners” instead of service.
It’s just wonderful.
(Congratulations Jeff, I’m sure you will do a good job in spite of working in a place that couldn’t care less about its transit riders)

Chris I
Reply to  al m

As a transit rider that also bikes, I’m glad that they employ someone to plan projects that enable me to park my bike and ride transit, or bring my bike on transit. Every quality transit system accommodates bikes, either by providing parking or with space on the vehicles. This infrastructure doesn’t just pop up out of thin air. Someone has to plan it, and someone has to build it.

Congratulations on your new challenges, Jeff.
Wilsonville will miss you!

Congrats Jeff! thanks for all your hard work within Wilsonville… Hope we get more active results with WES train bike access along with longer running train times. * more cars off the road * if we had some Sat/Sun service

I think we need a dedicated update on what has been keeping Jeff busy over the last three years at Trimet. Please forgive me if one already exists. Maybe you can point me in the direction of that article?

Thanks Jonathan and Michael!