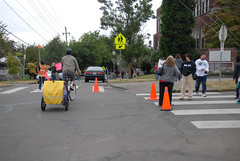 One key set of reforms Republicans fought for in the transportation bill was to ease environmental and other regulations in order to hasten project delivery. For active transportation and environmental advocates, this is a scary thought because it conjures up images of massive new highways and bridges running roughshod over wetlands, natural areas, and sustainable planning practices. While the project delivery provisions in the new bill are not as earth-friendly as those advocates had hoped, they could end up being a boon for bicycling — especially for projects carried out as part of the Safe Routes to School program.

From early on, House Republicans made it clear that cutting back on red tape and regulations on big highway projects was a top priority. Back in February 2011, when House Transportation & Infrastructure Committee Chair John Mica (R-FL) held a “listening session” in Vancouver, he got an earful from state DOT and public works staff about “extremely onerous” regulations holding up their projects.

Not surprisingly, the new bill contains several provisions aimed at streamlining project delivery. A categorical exclusion from project delivery regulations can now be given to: all highway and bridge projects reconstructed after an emergency declaration; all projects within the “existing operational right-of-way” (which includes things like bike lanes and sidewalks); and all projects that get less than $5 million from the federal government (Safe Routes projects are almost never over $1 million).

These new provisions could be a boon to bicycling by allowing cities and states to deliver some bike-related projects and programs with much less red tape, costs, and bureaucracy. For years I’ve heard complaints about federal regulations from people who work on Safe Routes to School projects.

Margo Pedroso, the deputy director of the Safe Routes to School National Partnership, has mixed feelings about it. “We’re torn,” she shared via telephone yesterday. “They could create big loopholes in environmental protection; but there are some opportunities for making our smaller, low impact projects move more quickly.”

Pedroso told me one story of staff from a small school in Arizona who wanted to buy some little giveaways to encourage kids to walk and bike to school. “They were going to three stores to get three prices,” she said, in order to fulfill the competitive bid requirements of the federal contract. I’ve also heard of local municipalities wanting to build a small stretch of new sidewalk and having to spend thousands of extra dollars on comprehensive engineering and soil analyses before moving forward.

In short, Safe Routes projects are tiny in comparison to massive freeway and bridge projects; but in many cases, due to the way the current law is written, they must adhere to the same level of regulations.

League of American Bicyclists President Andy Clarke is also cautiously optimistic about how the new bill will impact bike-friendly projects. “The fact that ‘small’ projects can be fast-tracked more easily is definitely a benefit to bike and pedestrian projects in the future,” he shared via email yesterday. But, Clarke also said that fewer regulations will do nothing to reign in what he calls “State DOT’s endless appetite for more, bigger, wider and faster roads.”

Pedroso says the project streamlining provision she’s most excited about is language in the new bill that calls for the USDOT to gather stakeholders together to determine where the problems with project delivery are and come up with a new best practices. “As the USDOT goes through the process of actually writing the regulations, we will tell them, don’t forget about our small projects.”

President Obama is expected to sign the bill on Friday.

I’m normally an optimist, but this seems a bit of a stretch to find the silver lining. Getting our tiny projects through more quickly seems a small win for skipping the review on bigger stuff. CRC anyone?

main article
A categorical exclusion from project delivery regulations can now be given to: all highway and bridge projects reconstructed after an emergency declaration; all projects within the “existing operational right-of-way” (which includes things like bike lanes and sidewalks); and all projects that get less than $5 million from the federal government (Safe Routes projects are almost never over $1 million).
(Emphasis mine)
Wouldn’t “all projects within the ROW” include bulldozing the bike lane and wide sidewalks to install an extral traffic lane while retaining on street parking?

Formatting borked … the question at the end was mine and not part of the article.
Doh!