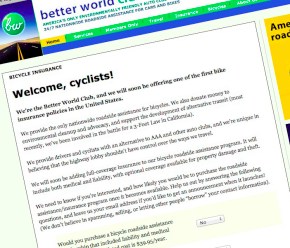 Better World Club Marketing Director Lauri Fish says they are just ironing out some details and expect to have the new services available in June. Fish says Better World will add the medical and liability insurance — as well as optional coverage for bike theft and property damage — onto their existing Bicycle Roadside Assistance package.

Options for comprehensive bike insurance that is similar to auto insurance has long been lacking for folks who primarily ride and for the increasing number of Americans that don’t own a car at all. (Learn more about this issue in our post, A guide to bicycle insurance options from January 2010).


The optional theft and damage protection for your bike would be based on your bike’s value. Annual premiums, Fish says, will likely be about $40 for bikes valued up to $1,500 and would go up incrementally each $1,000 in value. The new insurance policy will also come with $1 million in liability coverage if you are involved in a collision with someone else while bicycling and it’s proven to be your fault.

This is an exciting development for folks who use a bicycle as their primary vehicle. Since comprehensive bicycle insurance hasn’t existed (until now), people have had to rely on either their homeowner’s insurance policy (which might just cover property damage), their own auto insurance policy (if they owned a car), or the policy of the person driving the motor vehicle (if indeed they even had coverage or had enough coverage). But all of those options come with legal grey areas and gaps in coverage.

“We’ve been hearing from customers for years that they needed this,” said Fish via phone this morning, “There was always something missing with previous coverage that cyclists were really looking for.”

Better World Club says they’re the natural company to offer what they believe is the first affordable, full-coverage policy of its kind available in the U.S*. “We really push alternative modes of transportation over automobiles,” said Fish. The company also directly positions themselves as an alternative to the AAA and other auto clubs. AAA has come under fire among bicycle advocates in the past for supporting auto and highway-centric legislation, while Better World Club says they’ve been squarely behind the fight for a 3-foot passing law in California.

Better World Club’s Bicycle Roadside Assistance package is $39.95 a year. They’re expected to make the announcement of the new coverage plans in the next week or so. Stay tuned to BetterWorldClub.com for updates.

*UPDATE: After publishing this story I was contacted by a representative from Spoke Insurance. Spoke has been writing comprehensive bicycle insurance policies since February 2012, which would make them the first company to offer this product in the U.S.

Also, consider umbrella insurance for covering general liability that is not covered by your other types of insurance.

also: IF you own a house. additionally, i am looking forward to this for bike-on-bike collisions, which i was involved with last year. sent the other woman to the hospital with a broken elbow that required surgery! 🙁

am i wrong in thinking this almost seems like something people will sign up for to have their bikes purposely ‘stolen’ so they can get insurance money for a brand new bike?

that weird paranoia aside, this seems like a fantastic offering. i’d have so much more piece of mind taking my retrovelo places if i had it insured for theft/damage.

@naomi – I would expect it comes with a requirement that claimants file a police report on the theft. I leave it to you to consider whether local police investigations would be enough of a deterrent to discourage such fraud beyond the level that one’s own conscience would already do so.

Meanwhile, I love the notion of being able to just smile and say, “So?” the next time I hear a share-the-road conversation where somebody smugly says, “But I pay for insurance on my car…”

I switched from AAA to BWC a few years back for exactly the reason mentioned – AAA tries to green-wash themselves, but they always come down on the side of automobiles. The ability to get bicycle roadside assistance with BWC was an added bonus. I haven’t had to call for a bike “tow” yet, but glad to know I have the option if when I’m touring far from home.

UH-OH, it is well documented that when insurance enters the fray prices rise. I can’t wait to see what this will affect.

@Scott Sallay – more information, please. What prices will rise? Those of bicycles? Medical costs covered by liability insurance?
I’m not trying to be snarky, I honestly don’t see the connection. Are you thinking that insurance companies will create a deep pockets scenario where people will take offense at every imagined insult by someone on a bike and will attempt to sue for damages?

Everything. Literally. All things involved. Get a piece of art or something valuable appraised and you will get real value and insurance value. Insurance value is always higher and as it rises so does the price on product. Insurance causes the price of things to rise at a rate that has nothing to do with materials cost, inflation or market competition. Ron Paul has books that cover this topic.

Disclaimer: All politicians are windbags, but Ron Paul at least has some interesting books he has written.

Better World Club, as far as I can tell, would not be the actual insurer, but rather a producer / agent to sell policies issued by registered insurance companies. So far, it doesn’t appear that they are licensed as a producer / agent yet in Oregon. So, hopefully, they will obtain the appropriate license or verity that they are not subject to licensure to operate in Oregon. I’d be curious as to what actual insurance companies would be providing the coverage.

So if Mrs Dibbly & I own a number of bikes, is the cost coverage more even though we can only ride, at most, 2 of them at once? And what if we’re on the tandem and she makes us crash? (Because *I* would NEVER make us crash, of course!) And are there discounts for storing the bikes inside of a secure building? Clearly, I need to check out this Club…

I haven’t had a bike stolen since my paper route bike was stolen from a shop where it was being repaired, over 40 years ago. (I did get a “much better suited for a paperboy” 3-speed Schwinn Typhoon out of that deal, though.) Having insurance wouldn’t make me cavalier about locking up, etc, but it might ease the hurt of finding an empty space where my bike used to be.

But Better World Club is not first in the nation. Spoke Bicycle Insurance has beat them to the market:

Regardless, this is an idea whose time has come, as evidenced by ate least two separate companies seeing an unmet need and doing the hard work necessary to provide vitally-important insurance coverage for cyclists.

Thanks For pointing that out Rick. I had never heard of Spoke, but after reading your comment and hearing from a company rep via email, I have added their info to the story as an update.

Would this insurance be available in other states besides Oregon? How would I find out if this is available in my state (Wisconsin)?

I would be interested in such a policy. (Though it would have to be ‘portable’ to my ‘bike of the day’ within my stable of bicycles when that bike is ridden by me vs. only vehicle based.) I was hoping Zipcar/ Flexcar, etc. was going to solve this problem at one time for its non car owning membership…but no luck.

This has been one of my long time worries, as someone who has not owned a car in almost 25 years…either hitting a pedestrian or being hit by an insurance-less driver (there is like ~30% of drivers in some communities do not have insurance and more are likely under covered).

I have had to buy into another driver’s policy just to band-aid some protection when I borrow their car or am bicycling about; in addition to my other insurance. (This has since lowered my car sharing use.)

Picture me interested… I’d love to get some kind of UM/UIM coverage, PIP, theft, if it’s reasonable enough (and is tied to the bike-de-jour)

I would like that here in TX as well, something that would cover my bike in the next hit-and-run. TX has a hit-and-run victims fund, but it doesn’t cover replacing bicycles.

i like the idea that UM/UIM coverage is being made available to someone who does not own a car — spoke just now gave me an instant quote of 275 per year — but i would like to suggest that, unlike the motorist, i am being asked to pay for a risk i did not participate in creating. it would be more fair to impose this cost on motorists, for example by creating a fund to which enhanced traffic fines would be contributed, and increased premiums on SR-22 policies, etc.

It might be worth having roadside assistance if you had an e-bike and a dead battery.

or if you don’t know how to change a tire.

or if you blew your last tube while on a long ride out in the middle of nowhere.

or if you are in some sort of accident that damages your bike or causes it to be unrideable.

or if you twist your ankle and can’t ride back.

or if it’s late at night and you don’t want to be fussing with your bike vulnerable and in the dark.

Or if you’ve got 2 kids and groceries in/on your cargo bike and then any of those things you’ve listed.

There’s a cargo bike and family biking angle on this. I hope there are some industry people paying attention to this thread.

BWC = awesome people! They just became our first business sponsor for our project ‘Breakfast with Strangers: 50 Meals across America’. Even though we’ll be driving across the country the whole time – our goal is bring our bikes along with us. Happy to see an Oregon based company like the Better World Club doing this good work.

Sweet! Although I had BWC a couple years back and didn’t have a good experience with their bike roadside assistance (in contrast, BWC was super helpful with my car). When I called for roadside help, I was on the phone for half an hour with a BWC rep who first asked if I knew of any bicycle towing companies, then put me on hold while calling some places in town, and finally let me know that no one would tow a bike. It was a pretty useless service. Hopefully their insurance will be better!

gl.
Reply to  The holla

yeep! even AAA is supposed to be better than this! 🙁

A.K.
Reply to  The holla

It never occurred to for their operator to call you a cab, specially a van which could fit a bike in the back? *scratches head* That seems like ideal “bike towing” to me.

Excited that we’re trending in this direction. I’ll likely sign up if the fine print makes sense because a bike is not my primary but my sole mode outside of the mountain/beach trip via Zipcar

Would gladly like to see some sort of personal bike insurance that is not fixed to a particular bike. Very worried someday it would be made mandatory. My current roadside assistance is a Tri-met bus ticket.