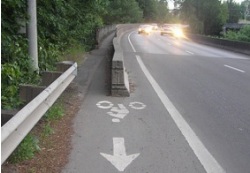 Bike access seems to have been an
afterthought on this bridge over the
Tualatin River on 99W.
(Photos: Jim “K’tesh” Parsons)

Back in December, amid smiles and celebrations at the groundbreaking for the Sellwood Bridge project, our roving West Side correspondent Jim Parsons reflected at the poor state bridge access on many Washington County roads.

With design drawings of the enviable biking and walking lanes slated for the Sellwood Bridge fresh in his mind, he fired off one of his trademark emails to his usual coterie of advocates, bureaucrats, and policymakers. The subject line read: “Bridge Improvements needed in Washington County.”

Parsons documented six bridges in particular he felt “could use some work.” Below are his images and his comments on each of them:

99W has four bridges that need help… There’s this one crossing the Tualatin River eastbound (Narrow, narrow, and narrow (and poor signage))… 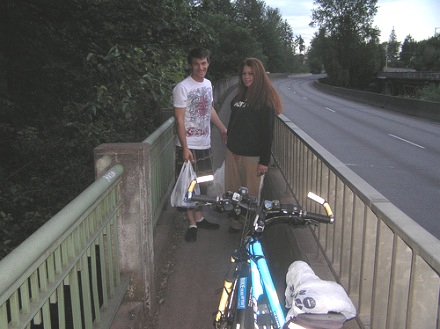 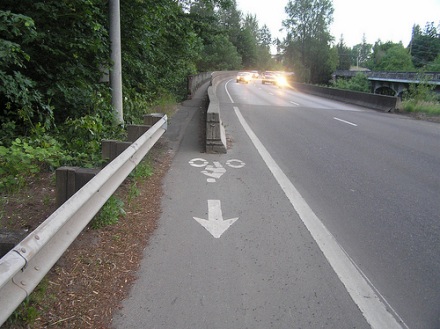 and then the westbound crossing of the Tualatin River (Narrow, bad signage, questionable approaches)… 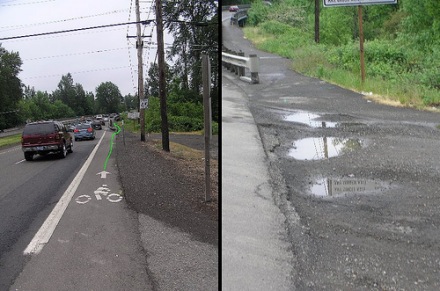 The Rock Creek bridge is unpleasant for cyclists… (no ramp up to the sidewalk, fast traffic frequently squeezing us)… 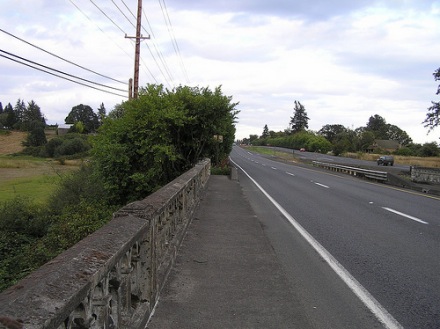 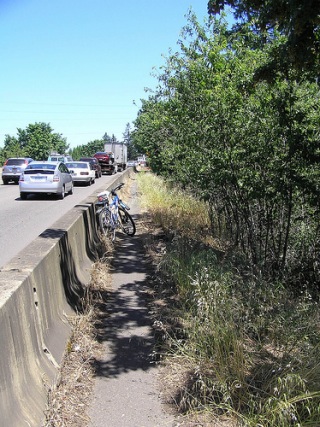 In Beaverton, we have the bridge over Beaverton Creek (SW Hall between the MAX tracks and Performance Bikes) which is narrow and has ice/snow/vegetation issues. 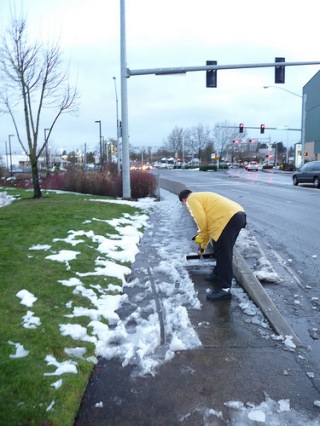 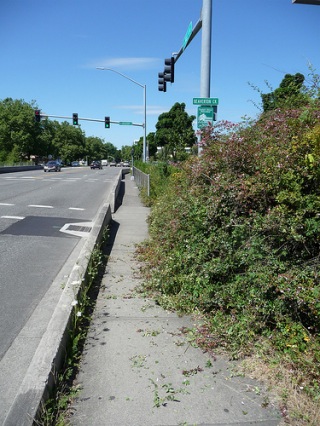 And let’s not forget this gem on SW Canyon (Beaverton), we have the bridge located between Video Only and BurgerVille 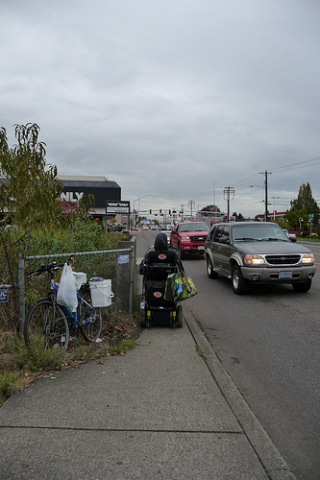 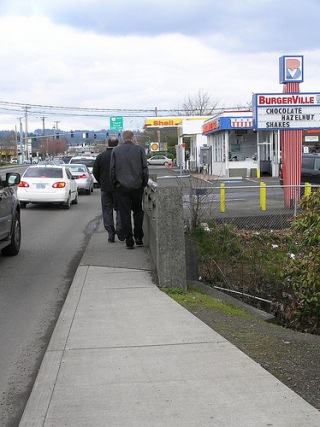 This wheelchairist (two photos up) couldn’t make it across this “sidewalk” to get to the crosswalk at SW Lombard. He ended up crossing mid-block… 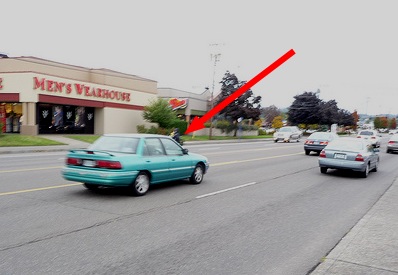 Parsons’ past campaigns to replace dangerous storm drains, re-stripe bike lanes, cut back vegetation on paths, and other things, have been met with a surprising frequency of success. Here’s to hoping he can raise enough attention to these bridge access issues to get some improvements to them as well.

— Live or ride in Washington County? Check our past coverage of that part of the region here.

not to forget the two bridges on SW Walker Rd west of 173rd… Very narrow, two lane. The roadway before and after is wider, with at least a shoulder, often a bike lane. Or Butner, headed eastbound, just west of SW Huntington – let’s go from a shoulder to a rock-lined ditch!

Glad to see this article. The bridges on the 99W corridor are very scary. I have only crossed the Tualatin on 99W once. The Tigard viaduct is terrible. I go miles out of my way to avoid both of these elements, which are on my most direct commute route.

This is definitely a situation where fixing a couple of clearly identified problems would dramatically improve the situation. As the pictures show the bike infrastructure leading up to these radically unsafe features is reasonably complete and highly usable.

Thanks for taking the lead on this Jim!

Re: 99w southbound over Tualatin river, call ODOT, they were very responsive a couple years ago when I called about this. Filled in the potholes and pounded it down pretty well.

I wish they would just pave the first few yards of the dirt road that enters there every rainy season pot holes develop there. Or at least do a yard or two from the shoulder to the sidewalk so you don’t have to hit gravel at all.

I know I’ll take the sidewalk heading south to Sherwood, but north bound I stay on the road, I’ve got enough speed to make it to the bike lane on the other side of the bridge.

I should have mentioned the two bridges on Barbur Blvd, but then again, that wasn’t Washington County (or was it)

Yikes, those are terrible.

The two shots of Canyon Rd showing Video Only, Burgerville, and the “wheelchairist” attempting to traverse the weenie sidewalk over Beaverton Cr, is Downtown Beaverton, just south of the Beaverton Transit Center, mid-way between Beaverton Town Square and Vintage Beaverton Downtown between Hall and Watson.

As Beaverton seeks to draw more business to Broadway, a 6-7 minute walk from here, this is the kind of thing people on foot and bike have to deal with. Word is that Urban Renewal development may address issues like these, but the timeline for that appears to put actual widening of sidewalks and bridges like this one…distantly into the future sometime.

The shot of the bridge over Beaverton Creek on Hall near Performance bike shows the scene of a crazy situation. The reddish brown shrubs in the background near the sidewalk (they’re planted on both sides of the creek bank.) put on a lot of height in a year, blocking view of oncoming north bound traffic, to anybody attempting to exit the Performance bike shop/strip mall parking lot.

The shrubs on the north creek bank (nearest the camera.) manage to be kept down to where they don’t interfere with view of the traffic, but the shrubs on the south side never get brought down, so they continually block view of oncoming traffic. Why? I was told several years ago by someone that should know, that it was because the south creek bank was the responsibility of Damerow Ford.

I just checked a map… How about this, it runs Northeast/Southwest? Until I checked, I’ve always thought of Portland as “east” of _______.

Check it out at http://www.oregon.gov/ODOT/HWY/BIKEPED/planproc.shtml

This is a great opportunity to familiarize yourselves and your municipal officials with the new design guidelines for bicycle facilities.

To get these bridges fixed, take a perusal through the state plan and find where these bridges fail to meet the design guidelines, then send in a maintenance request to the appropriate authority and ask for improvements.

For all the ODOT roads, the address is AskODOT@odot.state.or.us . For Washington County, use this form: http://www.co.washington.or.us/LUT/TransportationProjects/contact-us.cfm

* where bikes are routed onto the sidewalk, ask that the facilities conform to this passage:
“There are circumstances where it may be advisable to allow bicyclists to ride on a sidewalk: on long narrow bridges with high traffic volumes. This can help cyclists if the bridge sidewalks are wide enough for bicycle use (minimum 5 feet). Ramps should be built to provide cyclists access to the bridge sidewalks; signs should be placed advising cyclists to walk their bikes on the sidewalk ifit’s too narrow for riding. (page 1-32) and accompanying Figure 1-40, which dictates that the paved “exit route” from the street to the sidewalk be at least 8′ wide.

& for that skinny sidewalk that the wheelcharist couldn’t navigate, send in a maintenance request to Beaverton’s Public Works Department “Report a Problem” page.

Cite US ADA requirements for “Chapter 4: Accessible Routes” Figure 403.5.1 which shows that accessible routes must be 36″ wide minimum. (Bring a tape measure to make sure that skinny sidewalk really is less than 36″ wide).

For the weeds on the sidewalk, you shouldn’t need to cite anything, just send in the photo and list the street address of the property.

If you do want to cite something, you can cite the ADA requirements of a 36″ clear space.

For reporting problems to maintenance offices, I suggest

1) Send in a different request for each and every problem. Don’t lump them together.

2) Be clear, say exactly what’s wrong. Include a photo.

4) Emails are better than phone calls — you don’t need to worry about whether they wrote down the complaint correctly or not. And you know exactly what you asked for when you evaluate the modifications.

5) Send them a thank-you note when they’ve made the repairs.

6) If you want it to be a higher priority, get multiple people to send in a request. It will have more weight if 5 different people send it in than if one person sends it in 5 times.

Good luck, be the squeaky wheel!

7 If you don’t get results in a timely manner (say not even a response email), consider emailing the issue again, this time with more recipients in multiple agencies

K’Tesh thanks man for really getting out there and making a diffrence. I really don’t get how ppl can design cities around models that cause massive rework, seems like a waste to me.

those all look like the high-quality separated paths we can expect to ride on in the future.