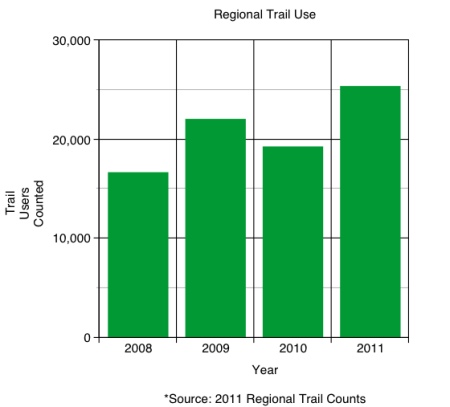 Annual trail use between 2008 and 2011 shows a steady climb (despite all the rain last year!).
(Graphic: BikePortland)

Use of multi-use paths throughout the Portland region continues to grow, at least according to annual counts performed by a large coalition of cities, organizations and volunteers that was released by Metro this week. 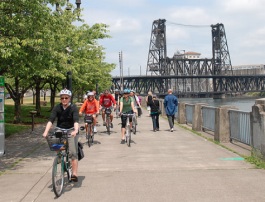 The counts were done in conjunction with the National Bicycle & Pedestrian Documentation Project and are organized by Metro in partnership with 13 other cities and counties in Oregon and Southwest Washington. They recruited volunteers who set up counting stations at 107 different locations throughout the region and had trail users fill out forms with basic information.

These regional counts have taken place each year since 2008 are part of a nationwide effort (sponsored by Alta Planning and Design and the Institute of Transportation Engineers (ITE) Pedestrian and Bicycle Council). The data is used to secure grant funding, measure the return on investment from new path construction, determine where to build new paths, garner feedback from users, make the political case for off-highway paths, and so on.

Learn more about the regional trail counts on Metro’s website. If you’d like to learn more about our regional network of paths and trails, check out The Intertwine and put the three events below on your calendar:

For Springwater on the Willamette, those 1.2 million trips translate into 3,287 trips per day.

If the great majority of those trips occur (as I suspect they do) between 6:00 am and 9:00 pm, that’s roughly 215 trips per hour (leaving a few extra for night owls and early risers).

I ride that stretch nearly every workday, and that number feels about right to me, averaging much higher traffic in the summer with those lonelier days in the dark, wind, cold, and rain.

Interesting stats! I wondered what the Columbia Renaissance Trail (it’s the trail along the Columbia in Vancouver) and learned that an important segment is closed indefinitely: http://www.columbian.com/news/2011/dec/21/renaissance-trails-closure-riles-residents/

Oh, I didn’t recognize that name either, but I knew that it’s closed indefinitely. I guess that 700K count was near the I-5 end which is more popular with peds. But the closed section is important to bike riders trying to avoid some of the bad spots on Evergreen Hwy without resorting to Hwy 14. The trail took a water-level route to Wintler Park where there’s a cut-through to Evergreen; this thread has cues. I hope Vancouver/Clark Co figure out how to fund its repair.

Yes – the previous counting station (light beam with reflector) was just east of Joe’s Crab Shack. I think it was recently moved a short distance away.

dmc
Reply to  Steve B

Part of the path became completely submerged under two feet of water during the high river levels. Half a dozen pedestrians were down at the flooded area that day on the path. I put on a show and road through it on my bike. 🙂

This is important work to do consistantly. Thank you volunteers (and Alta too).

As I have told our staff in the past (often traffic engineers or engineering techs): the data a community collects well reflects on its priorities.

No data = no interest.

Before we go patting ourselves on the back, maybe we should learn to look critically at the data. I question whether a two-hour count on a weekday and counts on a weekend day can be extrapolated to annual use anyway.

Looks like readin’, writin’ and ‘rithmatic is not enough any more.
Seems like we all need advanced statistical theory to discern if we are being manipulated by politicians and enough cyber security common sense to know where NOT to put our private data.

Or maybe they adjusted for that in their analysis? Also note Todd’s comment above about the methodology on the Ren. Trail.

I did! I didn’t get an answer from Metro, but I assumed (perhaps incorrectly) that the numbers would be extrapolated to take this into consideration. My assumption was based on the fact that the process/methodology of these counts is very professional and the folks doing it are very smart.

But your comment reminds me that I should verify that for sure. I’m asking around now.
====
OK, just heard back from Mia Birk (she’s helped spearhead the counts):
Mia says they extrapolate the counts and they also look at “apples to apples comparisons of same counting locations year to year to calculate percentage change.”

It’s good to hear that they’ve made “adjustments.” When they use the term “trail users counted” it’s hard to interpret that as anything but “counted.”

It’s great that they are moving toward a more robust data collection program, but I remain skeptical.

Thanks for the follow-up.

Wouldn’t it be great to have non-paved trails to get around Portland occasionally? e.g. the ones that run nearly alongside the Springwater north-south that are now illegal… Riding a mountain bike to and from work or just to have an experience in the woods without having to get in a car to do it…now THAT would be something to appreciate in Portland!!!

Herein lies the reason why we need to upgrade our MUPs to proper cycleways with separate pedestrian facilities. The demand is there and it would reduce congestion.